In the future fusion reactor, plasma is confined by using the magnetic field inside the doughnut-shaped vacuum vessel. The blanket is in a location where it almost touches the plasma, and as if to enfold the plasma the blanket is placed on the inner surface of the vacuum chamber. The blanket, by absorbing the high-speed particles generated by the fusion reaction inside the plasma, releases heat and a higher temperature is achieved. Then, cooling materials are passed through piping in the blanket, and heat is taken out to outside. Using that heat, hot water is heated and produces steam to power the steam turbine. At this time, the blanket is expected to be at the high temperature of between 700 and 800 degrees?. For this reason, in order to achieve long-duration and stable electricity generation it is necessary to newly develop material that is strong at high temperatures, and use that material in manufacturing the blanket.

As new material for producing the blanket, there are prospects for using vanadium, which is atomic number 23, as the principal component of the alloy. This alloy is composed of 92 percent vanadium, four percent chromium, and four percent titanium. The vanadium alloy, compared to the heat-resistant steel which is commonly used, combines various characteristics that are necessary for the fusion reactor blanket, such as high strength at high temperatures. To date, as a candidate material for the fusion reactor, development of the vanadium alloy is being conducted in the United States and other countries. Among earlier alloys, there were problems of breakage during machining for pipes and easy breakage after welding of pipe-fitting connections. In actuality, it was necessary to overcome this problem in order to construct a large structure similar to the fusion reactor using the vanadium alloy.

Causes of breakage of vanadium alloy during the machining of and after the welding are impurities such as carbon, nitrogen, oxygen, and others which are mixed with air and raw materials. Thus, at National Institute for Fusion Science (NIFS), by reviewing the manufacturing conditions and selecting the appropriate condition, we were able to remove impurities from raw materials. Moreover, in order to avoid the mixing of impurities from the air, we produced an alloy in vacuum or in inert gases (gas that does not have a chemical reaction). As a result, we successfully developed a high purity vanadium alloy NIFS-HEAT-2. Due to this high degree of purity, ductility (property that prevents breakage by extending under tension) was improved substantially and we were able to overcome the problem of breakage at the time of machining and after welding.

Conversely, in general, the high purity of metals invites the weakening of their strength. And even NIFS-HEAT-2, too, shared the same worry. However, we were able to confirm to maintain sufficient strength under the conditions envisioned for the fusion reactor blanket in the following strength test. In the strength test, in order to simulate the conditions of the fusion reactor, we heat the material to the high temperature of 800 degrees and set a fixed load. The materials gradually extend and change shape, and eventually break. As a result of measuring time to breaking off, under a load of below 1,000 atmospheric pressure (stress equivalent to a weight of 10.3 kilograms per millimeter squared) envisioned in the fusion reactor’s blanket, the time until it breaks off does not change even for high purification. Thus, we learned that the strength can be maintained.

As explained above, by purifying the vanadium alloy we clarified that it is possible to make the alloy strong against breaking up under machining and welding, and at the same time the strength can be maintained even at high temperatures. From this, we have shown for the first time in the world the possibility of producing a blanket that may operate at high temperatures for a long period of time. 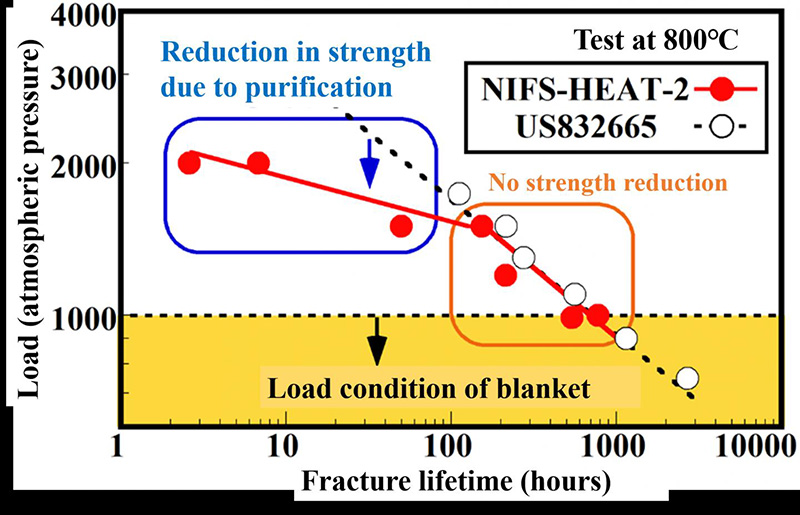 We measured the time until the vanadium alloy NIFS-HEAT-2 under the fixed load broke off (fracture lifetime) and compared it with test results of the vanadium alloy US832665 produced in the United States, with many impurities. At a stress exceeding 1,500 atmospheric pressure, strength degrades, however under the blanket condition of below 1,000 atmospheric pressure, we confirmed that strength is maintained. Credit: Dr. Takuya Nagasaka