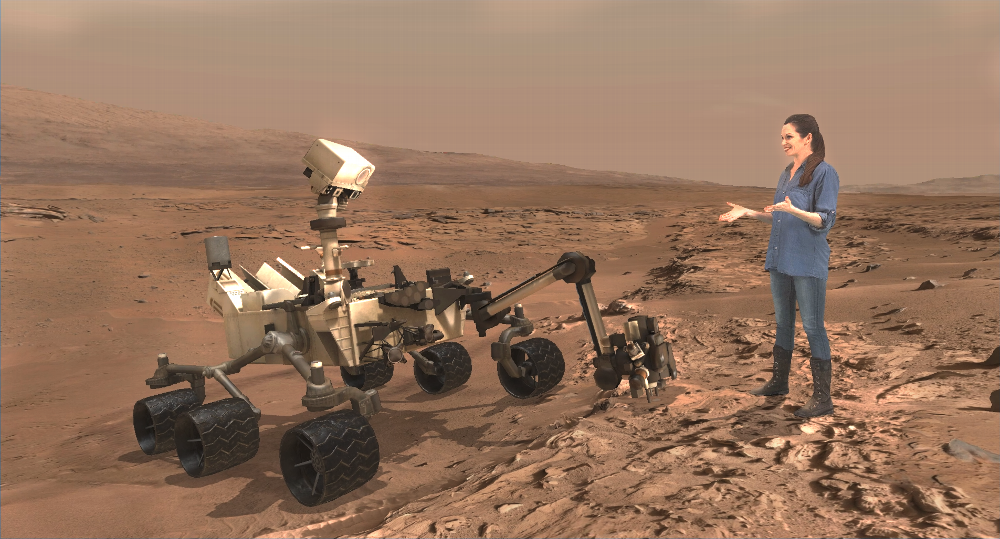 Thanks to a new digital holographic system, Visitors to Kennedy Space Center will be able to take a virtual tour of Mars with Curiosity rover driver Erisa Hines.

A walk on Mars may be in the future for astronauts, but at Kennedy Space Center Visitor Complex, guests don’t have to wait. A new, limited-time attraction Destination: Mars, which opened today, makes it possible to “walk on Mars” using real imagery from NASA’s Curiosity Mars Rover brought to life by Microsoft HoloLens, the world’s first self-contained holographic computer running Windows 10. Presented exclusively by Kennedy Space Center Visitor Complex, the experience will be located in a pop-up theater and will only be available through January 1, 2017.

Developed by NASA’s Jet Propulsion Lab (JPL) and Microsoft HoloLens, Destination: Mars will give guests the opportunity to “visit” several sites on Mars using real imagery from NASA’s Curiosity Mars Rover. A holographic Buzz Aldrin will guide guests to Mars in mixed reality using Microsoft HoloLens (Mixed reality means that virtual elements are merged with the user’s actual environment, creating a world in which real and virtual objects can interact). Visitors will “follow” Buzz and Curiosity Rover driver Erisa Hines of JPL, as they lead guests to areas of Mars where scientists have made exciting discoveries.

Destination: Mars grew out of OnSight, a scientific tool created by JPL and Microsoft currently used internationally by researchers. Scientists in different cities can walk together across the Martian surface, discuss geological features and plan for future exploration. The mixed reality tool allows them to study the Red Planet in a more naturalistic way than ever before. OnSight also helps to prepare scientists and engineers for NASA’s goal of a manned mission to Mars.

This limited availability, timed experience is available on a first-come, first-served basis. Reservations must be made the day of at the Destination: Mars reservation counter.

Click here for more information or to book a visit to Kennedy Space Center Visitor Complex.