Today’s successful manufacturing operations need high-performance digital marking systems that can handle 24/7 operation and integrate well into an enterprise-wide client-server IT system. A major challenge in the design of such a system is to minimize the maintenance requirements on both the server and the client side. Accomplishing this requires quick adaptation to changing requirements, ready integration with other external systems, scalability toward increased needs, and use of the latest technologies. 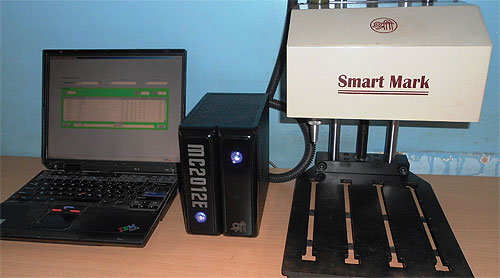 Totality is a design and manufacturing company that provides high-performance client-server systems that cater to the 24/7/365 production needs of manufacturers in high-volume production. Its primary product, the Direct Part Marking Machine, is used in applications where manufacturers need to mark parts using traceable data such as part numbers, serial numbers, batch numbers, date/month/year codes, and other necessary information. As an example, the automotive industry uses the marking machine to mark vehicles as well as automotive parts and accessories. To advance this technology, Totality wanted to create a more comprehensive and useful digital marking system.

That’s when the company’s engineers designed the MC2012E SmartMark marking machine, which consists of a Marking Stylus and the Marking Controller. The controller harbors a two-axis carriage, which supports the marking stylus. While each axis is driven by its own stepper motor, the axes operate in a synchronized manner to produce the downloaded character and graphic vectors. The engineering team chose to use stepper motors because they are simple and economical when compared to servomotor systems, and provide more than enough accuracy for the operation, even in open-loop operation. For example, addressable accuracy is 1 µm at a 256 microstep operation, while the effective accuracy is limited to 25 µm due to practical limitations of the mechanical system employed for the operation. 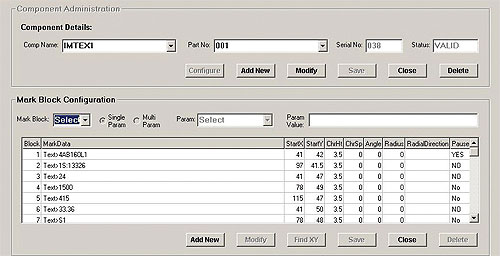 In these component creation and configuration screens, a user gets to select the information required for the particular marking operation from a simple menu.

This accuracy allows a pneumatic marking stylus, which is attached to the XY carriage, to trace the vectors and make a permanent impression, similar to a pen plotter, directly on the specific part to be marked. The marking machine creates the impressions through a series of indents that are created using high air pressure on the part itself at very high frequency rates. This marking technique is called micro percussion, or dot peen marking. The pneumatic stylus is supplied between 3 and 5 bar air pressure, depending on the required depth of marking and component hardness.

The engineers chose AllMotion stepper controllers and drivers because they are efficient, feature-rich, and reasonably priced. The MC2012E SmartMark machine incorporates two AllMotion EZHR17EN high-resolution stepper motor controllers and drivers—one for each axis. The controllers are tightly synchronized so that they can efficiently and accurately align the stylus into position for marking. Designed specifically to allow for the rapid implementation of stepper motor solutions in automation products, the controllers provide all the functions necessary for the application in one well-integrated unit. This includes the high-resolution stepper motor control; the axis homing function inputs and outputs that are used to implement functions such as start marking cycle, end of cycle signaling and marking status indications; high current switching for controlling the solenoid valves used to operate the pneumatic stylus; and an RS485 interface for communications with the host PC. The two EZHR17EN controllers are synchronized to produce the required marking at a very high resolution and at very high speeds of up to 5 characters per second at a 3-mm character height.

Once the user fills out the data on the Totality software, the marking data is available to download to the AllMotion EZHR17EN controller.

Each EZHR17EN measures only 1.6 × 1.6-in., and is a fully intelligent motor controller and driver. The controller uses a single 4-wire bus containing two power wires and two communications wires. The controller can be used in a standalone operation or up to 16 of the controllers can be daisy chained together.

Marking data includes line configuration so that each line of the manufacturing operation is accounted for; component creation including part name, number, and current serial number; and component configuration, which may include both constants and variable parameters such as plant code, shift code, batch code, date code, line code, and serial number. The marking operation begins by first performing a homing operation on the X and Y axes, and then proceeding with composing and marking each part for each block of sequential components.

Overall, the Direct Part Marking Machine takes only a few minutes to prepare in most cases. Due to the small size of the EZHR17EN, as well as its many capabilities, the marking machine provides the simplest and most accurate marking available, and can be integrated quickly and efficiently into most any industrial application.