Nearly two thirds of all energy created globally for commercial, transportation, industrial, and residential use is lost to inefficiency and waste. For operations aiming to achieve carbon-neutral status (or just higher profitability through energy conservation) preventing the loss of energy is at once immediately possible and commendable. After all, Energy Information Administration analysis indicates that industrial operations consume a quarter of the nearly 100 quadrillion BTUs produced in the U.S. every year (not counting the energy expenditures associated with logistics and outer transportation activity) but half of that is wasted.

Though rendered impossible by current national and global politics, it’s still technically feasible for humanity to restrict coming decades’ climate change to within 1.5° C — the U.N. Intergovernmental Panel on Climate Change target for avoiding the absolute worst effects of climate change — in part by minimizing energy waste. But it’s nearly certain climate change in coming decades will in fact exceed 1.5° C, so in the U.S. will vastly increase deadly heat events, droughts, wildfires, and farming catastrophes in Texas, Oklahoma, Kansas, Nebraska, Iowa, and the Dakotas as well as other states in the west and south. In the U.S., this climate change will also bring coastal flooding and devastating storms to Texas, Louisiana, Florida, South Carolina, New York, Hawaii, and California as well as the death, destruction, and extinction of both terrestrial and marine species, habitats, and ecosystems (including 70% to 90% of the world coral reefs). Between 2008 and 2019, about 14% of all coral reefs around the world died — and reefs have been halved since 1950s. NASA imaging confirms that in less than 20 years, Antarctica and Greenland ice has already melted the volume of Lake Michigan … and despite a half century of advancements in agricultural approaches, global farming productivity is 21% lower than it could’ve been sans climate change.

For manufacturers and automated facilities who acknowledge that climate inaction is costlier than action, a top goal is achieving net-zero greenhouse gas emissions. These efforts prioritize the reduction of CO2 and to a lesser extent methane, nitrous oxide, and fluorinated gases. If urgent warnings are to be heeded, manufacturers should cut their emissions by half within the next 10 years.

Of course, many industrial operations — including those involving heating and cooling processes, machining, and any physical transport of raw materials and workpieces — are inherently energy intense. That said, the application of digital-transformation (DX) systems such as energy analysis software, realtime energy tracking, and digital energy management can handily trim an industrial operation’s energy waste by 10% or more. These DX technologies measure and (in some cases) continually monitor energy flows through a facility to profile and target areas of potential improvement. 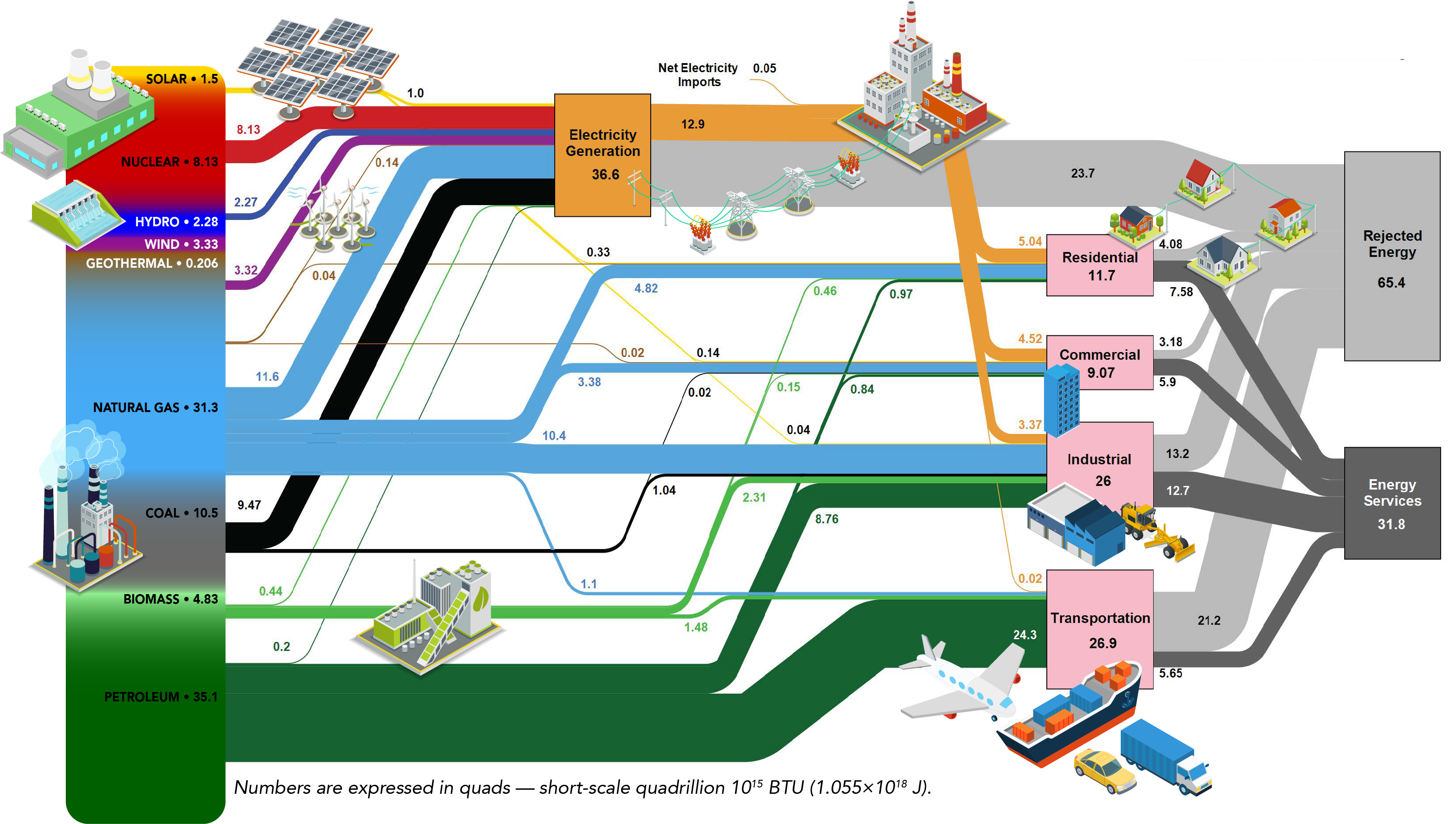 Shown here is a Sankey representing sources, uses, and wastes of energy in the U.S. Values are based on data from March 2022 via the Energy Information Administration. Distributed electricity here includes retail electricity sales and none self-generated. Electricity production efficiencies here is the total delivered electricity divided by the primary energy input. End-use efficiency is about 65% for residential, 65% for commercial, 21% for transportation, and 49% for industrial (with the latter reflecting DOE analysis of manufacturing). Source: Lawrence Livermore National Laboratory • Department of Energy

Key is the reduction of waste heat and emissions from electric utility power plants and transmission systems (purchased power) as well as the power distribution elements, motors, drives, engines, compressors, lights, mechanical components, and other elements under an operator’s control in the plant itself.

In many cases, DX software for the improvement of energy efficiency takes the form of energy management information systems or EMISs. EMIS software is complemented by sensors (wired and wireless), data systems, and employee as well as organization programs to review and apply EMIS data collected from energy-performance tracking. Comprehensive deployments can even aggregate the data across a whole plant (or multiple company locations) to optimize energy use. In contrast with legacy approaches (in which operations may have only reviewed energy consumption trends every month or year over year) today’s EMIS-based systems often use sensor-generated data collected every day, hour, or minute (or in realtime) to detect or profile even slight issues rather quickly.

EMISs are an increasingly diverse and common type of software for energy monitoring and analysis to inform immediate and future improvements.

DX initiatives can help operations identify where in a plant or operation the most dramatic efficiency gains can be had. For larger operations, such programs can save millions of dollars in energy per year. Image: Armmy Picca

Sustainability-related programs leveraging edge computing are seeing increased adoption for two main reasons. First of all, edge computing supports green-engineering efforts through its processing of vast data streams to improve monitored operations’ sustainability profile. Correlating process functions to energy use, raw material consumption, and emissions generation via sensors can yield information about specific operations that can be standardized on one data set. Filters on this locally processed data then remove all irrelevant or invalid data to output actionable information. Edge computing in such arrangements also helps industrial operations keep massive amounts of raw data (the production of which has only grown exponentially over recent decades) off remote servers that globally consume more than 200 trillion Watt-hours every year. 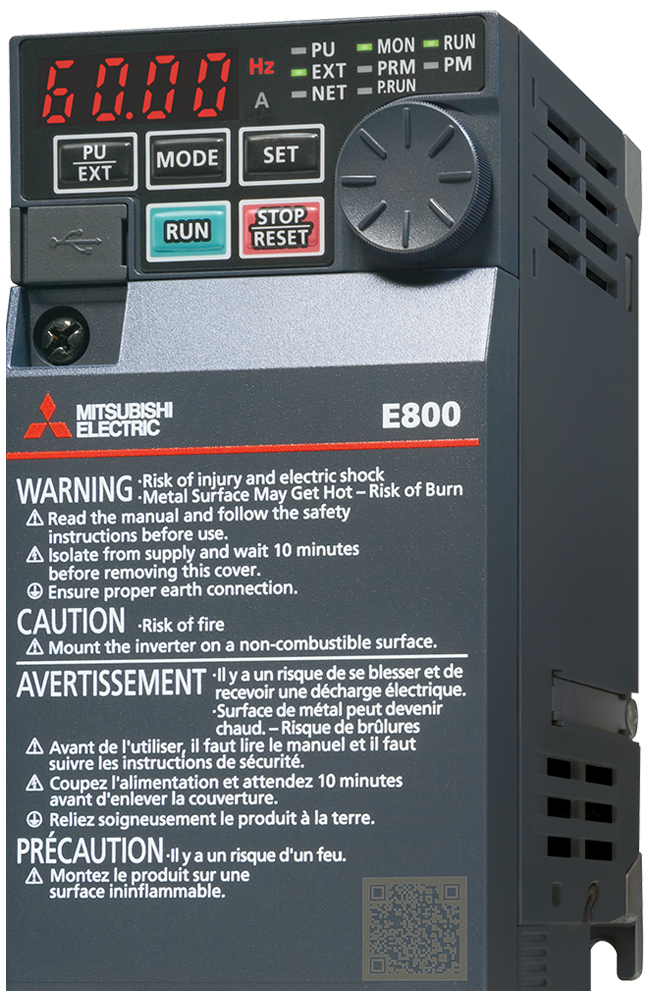 In addition, edge computing supports green-engineering efforts by minimizing scrap and defective output products. Because solid industrial waste is nearly twentyfold that generated by municipalities worldwide, all conservation efforts here are worthwhile. Sensor arrays used in this way prevent overproduction of a given ingredient or subcomponent while concurrently preventing the output of defective items destined for scrapping. Continuous machine monitoring quickly identifies value anomalies and malfunctions; these can then trigger warnings, a temporary halt to operation if possible, and [ideally predefined] troubleshooting and corrective measures. Upon completion of machine rebooting or repairs, operations are resumed — and all the collected, filtered, and standardized machine data of the downtime event can be used to yield deeper insights into a given machine’s profile and prevent similar issues in the future … or optimize upgraded or next-generation versions of the equipment.