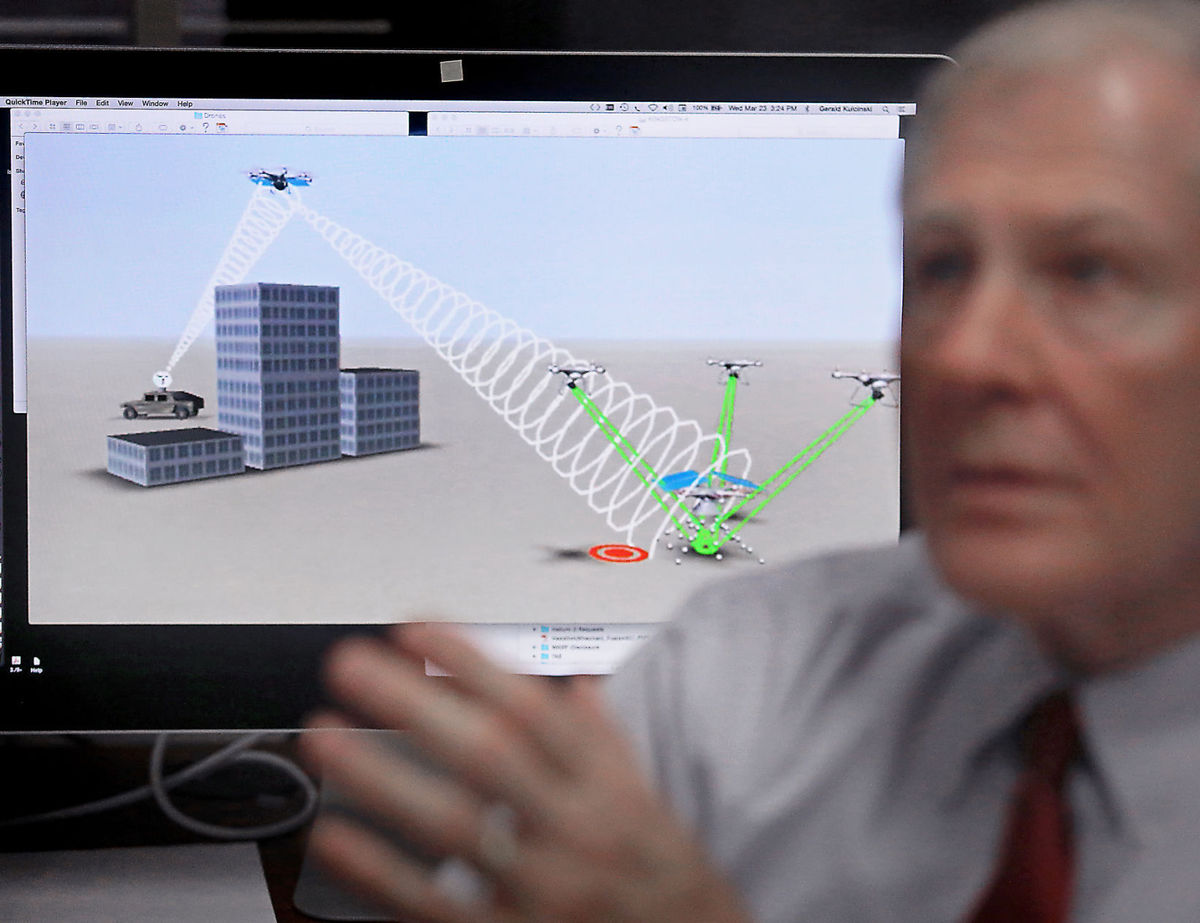 An animation of drone technology used to detect explosives is shown on a computer screen in the office of Jerry Kulcinski, emeritus professor of nuclear engineering and director of the Fusion Technology Lab. (Credit: John Hart, State Journal)

Researchers at University of Wisconsin-Madison’s Fusion Technology Lab have devised a system that, when attached to a series of unmanned aerial vehicles (UAVs), can detect nuclear and chemical weapons.

In other words, scientists have invented bomb-sniffing drones.

The technology actually integrates several aircraft, each with an indispensable function to the overall system. A relay drone hovers in the air, while a device on a grounds vehicle generates electricity and turns it into radio waves. These wave are then beamed up to the relay drone, which converts them back into electricity and then back to radio waves again, before beaming them back down to power a neutron drone.

Meanwhile, the neutron drone irradiates the ground with neutrons, activating the nitrogen in any potential explosives. The resulting gamma rays are then picked by up two to three sensor drones, which can identify the explosive’s chemical signature, marking its location within one foot and alerting mission control.

“Detection of illicit materials is a really difficult problem, especially for the most dangerous nuclear material, which is highly enriched uranium,” Matthew McKinzie, a nuclear physicist for the Natural Resources Defense Council, told The Journal Times. “The radiation signal can be concealed very effectively. And an improvised nuclear device, a terrorist’s nuclear weapon, can be made most simply with highly enriched uranium. In my mind that’s the toughest case. I think that’s the greatest challenge for that system: can it address that threat?”

Currently, the sensors utilized by this drone system are used in airport security and in detectors used by UN weapons inspectors and military bomb specialists. Oftentimes, however, closer contact with hidden (and therefore dangerous) explosives is required. That’s where the drones come in—a cheaper alternative to the special tracked vehicles currently in use to detonate possible explosives.

The aerial technology does, however, raise concerns for its use of radiation, which the drones make use of when scanning their target area. However, researchers are confident that levels are minimal—the equivalent to the amount of radiation a traveler absorbs after spending 10 minutes in an airplane flying at 30,000 feet.

The U.S. military is (rightly so) interested in further developing this technology, with the U.S. Navy hopeful that it can be adapted to detect mines at the bottom of the sea. (Currently, the hydrogen in water slows down neutrons, making it impossible to detect an explosive unless it’s located within three feet of the water’s surface).

Of course, applications extend beyond the battlefield: the drones can be tailored to map mineral deposits in mountainous areas, or locate people trapped in coal mines or disaster zones. They can even survey the moon for new energy sources.

While the sky’s the limit, researchers hope that the drones will ultimately make life a little safer for us here on Earth. Said one PhD candidate, Aaron Fancher: “Clearly it’s a very important thing, more so as unfortunate things like (the Brussels attacks) continue to happen.”