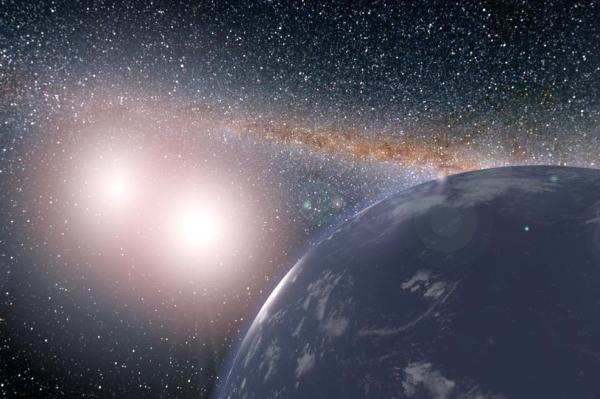 In “Star Wars,” the science-fiction planet Tatooine, birthplace of Luke Skywalker, is a dry, desert-like world illuminated by two suns.

In the real universe, astronomers have only discovered gas giants orbiting binary star systems. But new research suggests an Earth-like planet orbiting a pair of stars could be habitable.

Researchers built a model based on Kepler 35, a binary star system. Scientists ignored the system’s sole planet, Kepler 35b, a giant planet roughly eight times the size of Earth. In its place, researchers introduced a Earth-size planet.

The model helped scientists predict how an orbital path around a pair of stars like Kepler 35 A and B would affect a rocky planet’s atmosphere.

“Our research is motivated by the fact that searching for potentially habitable planets requires a lot of effort, so it is good to know in advance where to look,” Siegfried Eggl, a Caltech postdoctoral scholar at NASA’s Jet Propulsion Laboratory, in Pasadena, Cal., said in a news release. “We show that it’s worth targeting double-star systems.”

Eggl and Max Popp, an associate research scholar at Princeton University in New Jersey, detailed their work in the journal Nature Communications.

When considering habitability, double star systems involve additional factors — more objects are in motion. The planet in question is affected by gravity of two stars orbiting one another. Thus, the planet’s orbit is not circular, but wobbles as it is impacted by gravity of the two circling stars.

Researchers determined that a rocky, Earth-like planet along the outer edge of Kepler 35’s habitable zone would host only a small amount of water vapor. As a result, it would feature wild swings in temperature each year — changes in global average as great as 3.6 degrees Fahrenheit.

“This is analogous to how, on Earth, in arid climates like deserts, we experience huge temperature variations from day to night,” Eggl said. “The amount of water in the air makes a big difference.”

A rocky world closer to the inside edge of Kepler 35’s habitable zone would feature more water vapor and a more stable atmosphere, with less dramatic temperatures shifts. Such a planet would also feature few clouds, models showed — clear skies to view the daily double sunset.