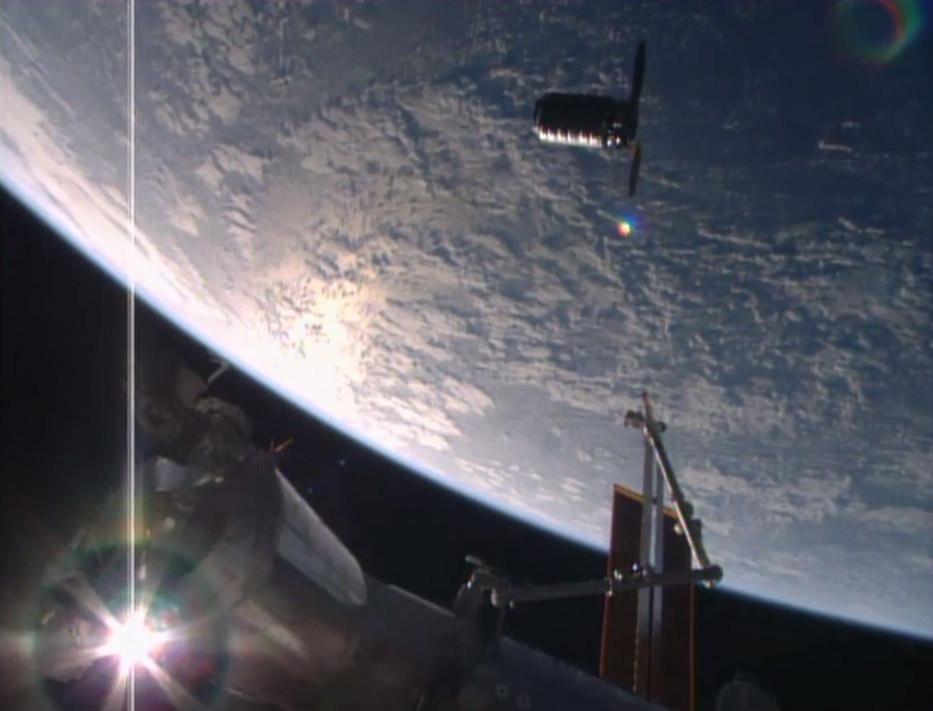 In this image made from video provided by NASA, Orbital ATK’s Cygnus cargo ship, top, approaches the International Space Station on Saturday, March 26, 2016. The cargo carrier was launched from Cape Canaveral on Tuesday. (NASA via AP)

The six astronauts at the International Space Station got an early Easter treat this weekend with the arrival of a supply ship full of fresh food and experiments.

Instead of the usual bunny, Saturday’s delivery came via a swan — Orbital ATK’s Cygnus capsule, named after the swan constellation. The cargo carrier rocketed away from Cape Canaveral on Tuesday night.

It’s the first of three shipments coming up in quick succession. A Russian cargo ship will lift off Thursday, followed by a SpaceX supply run on April 8. NASA has turned to private industry to keep the space station stocked.

The newly arrived Cygnus holds nearly 8,000 pounds of groceries, equipment and research. Among the newfangled science: robotic grippers modeled after geckos’ feet and the ingredients for a large-scale, controlled fire. A commercial-quality 3-D printer is packed inside as well; anyone will be able to order prints, for a price, from the Made In Space company. Virginia-based Orbital ATK hints Easter eggs may also be on board.

The blaze — confined to a box inside the Cygnus — won’t be set until the capsule departs in May with a load of trash. NASA researchers want to see how fast the cotton-fiberglass fabric burns, in hopes of improving future spacecraft safety. Following the experiment, the capsule will burn up, for real, during re-entry.

As it turns out, the Cygnus had an out-of-the-ordinary ride to orbit. The first-stage booster of the normally reliable unmanned Atlas V rocket stopped firing six seconds early, and the upper stage had to compensate by burning a minute longer, to get the capsule in the right orbit. Rocket maker United Launch Alliance has delayed its next launch, a military satellite mission, to figure out what went wrong.

The commander of the doomed space shuttle Columbia, meanwhile, is being honored with this latest delivery. Orbital ATK named this Cygnus after Rick Husband, who piloted the first shuttle docking at the space station in 1999. He died aboard Columbia during re-entry in 2003, along with six other astronauts. Kopra called him a “personal hero” and said he was honored to welcome the “S.S. Rick Husband” aboard.