While by day, I work to bring you the latest and greatest in wireless design news, by night—or, you know, after the hour of 5 p.m.—I’m a massive gym junkie (hence the line, “Sarah’s interests include…lifting heavy things,” in my author bio). With the rise in popularity of fitness wearables in recent years, these two facets of my double-life, however disjointed they may sound, no longer remain so removed from each other.

The majority of popular fitness wearables on the market today cater to the “just get up and move more” demographic, which (unfortunately) characterizes most Americans in a day and age when cars drive us to and from our sedentary nine-to-five desk jobs, and marathon running comes second to marathons on Netflix.

In an attempt to combat that, wearables (like the Fitbit, for example) provide the average desk-bound consumer with a slew of movement-related metrics: How many steps have you taken today? When and how often did you experience an elevated heart rate? How many stairs did you climb? How many calories did you burn?

While that’s all well and good, these gadgets, at least in my experience, are designed and marketed first and foremost for the fitness novice—which is probably why I lost interest and never stuck with them.

That’s why the Beast Sensor immediately grabbed my attention—the first wearable designed for consumers who regularly grip and rip barbells. 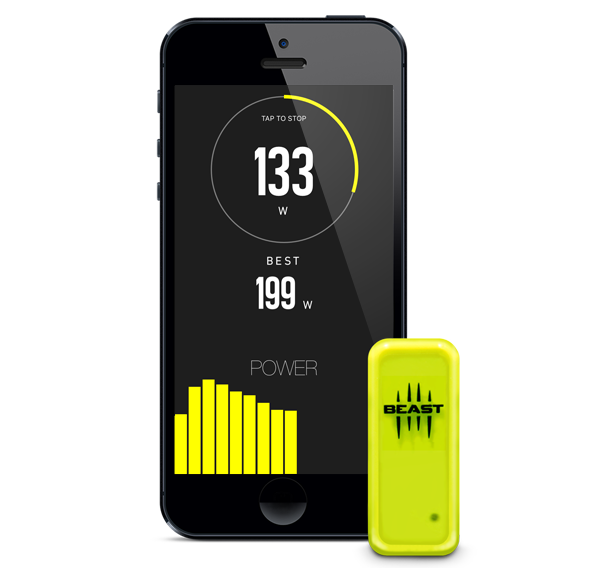 The small (20 x 19 x 40 mm) device integrates an impressive set of onboard motion sensors including accelerometers, gyroscopes, and compasses. The Beast Sensor captures data about the strength, power or speed of your movements (from squats to bicep curls to pushups), and then transfers it via Bluetooth to your smartphone or tablet in real-time. You can then review your performance and adjust weight, sets or reps accordingly.

Yep. Definitely not your typical “for the love of Pete, just stand up and walk more” fitness tracker.

The Beast Sensor can be worn via a wrist strap (included with the device), and because it integrates a magnet on its underside, it also sticks to equipment, from barbells to kettlebells, in the event the strap inhibits a particular movement.

While the device is still fun and informative for beginners, it is an exceptionally useful tool for intermediate to advanced athletes who need to hone in on certain training variables in order to progress. For example, an athlete might use the Beast Sensor to gauge the consistency of his or her power output: if power (how fast the lifter moves weight with force) decreases over sets, then he or she might want to readjust form, speed—or the load itself.

The specs (courtesy of Beast Sensor).

That being said, the Beast Sensor provides a truly impressive array of data variables including volume, density, total time under tension, average power, and average speed. It also uses your best repetition to generate graphs that analyze, even further, the acceleration, velocity, and power at each point in time during a movement.

A breakdown of one of my snatches.

That being said, the device works best during simpler, single-plane movements (think: squats or presses) and has some difficulty tracking more dynamic lifts—or, for that matter, differentiating between moving your arm to readjust your grip on a barbell and actually performing the intended movement. When I wore the Beast Sensor while snatching (by nature, a highly dynamic, nuanced Olympic lift), the sensor picked up on more than one movement pattern and read that data as several separate repetitions.

Additionally, while the sensor and app are easy to use (Beast Sensor even provides several how-to videos on setting up and using the device), the data itself at times requires further instruction in order to interpret. If users don’t know what a particular number or graph means, they can’t effectively integrate that information into their future training sets.

In conclusion, it can be difficult for many athletes to progress if they don’t know what to dial in on, which may lead them to believe (falsely, I might add) that they’ve simply plateaued, athletically speaking. The Beast Sensor shines in that it enables people of all fitness levels to get more out of their strength training by providing an in-depth breakdown of each movement. This makes the device (already a step up from the average fitness tracker) a particularly helpful tool for intermediate to advanced athletes who require more specialized focus in order to progress—making it not just physically rewarding, but highly motivating as well.

For more information on this beast of a wearable, visit www.thisisbeast.com.