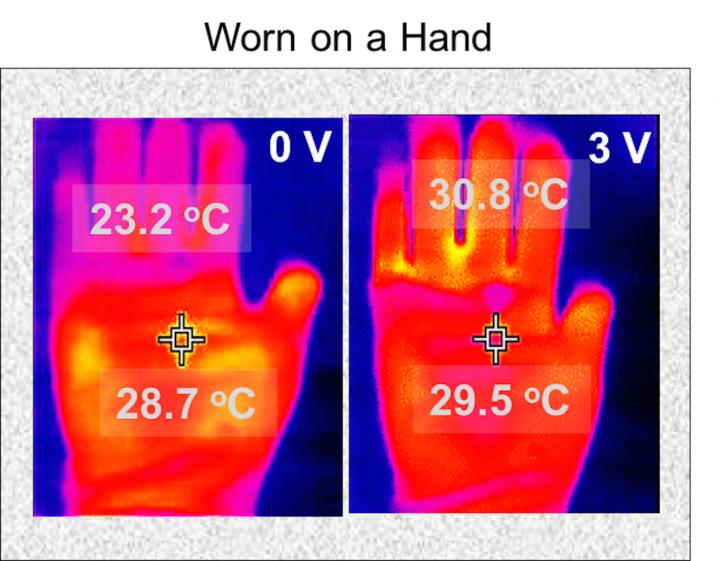 A three-layered glove developed by materials chemist Trisha Andrew has one layer coated by the conducting polymer PEDOT and is powered by a button battery weighing 1.8 grams. Image credit: UMassAmherst

Commuters, skiers, crossing guards and others who endure frozen fingers in cold weather may look forward to future relief as manufacturers are poised to take advantage of a new technique for creating electrically heated cloth developed by materials scientist Trisha Andrew and colleagues at the University of Massachusetts Amherst. They have made gloves that keep fingers as warm as the palm of the hand.

In a new paper in Applied Materials & Interfaces, the scientists describe how they use a vapor deposition method for nano-coating fabric to create sewable, weavable, electrically heated material. The demonstration glove they made can keep fingers toasty for up to eight hours. The three-layered glove, with one layer coated by the conducting polymer poly(3,4-ethylenedioxytiophene), also known as PEDOT, are powered by a button battery weighing 1.8 grams. A dime weighs just under 2.27 grams.

Andrew said, “We took a pair of cotton gloves and coated the fingers to allow a small amount of current to pass through, so they heat up. It’s regular old-fashioned cotton cloth. We chose to make a pair of gloves because the fingers require a high curvature that allows us to show that our material is really flexible. The glove is powered by a small coin battery and they run on nano-amps of current, not enough to pass current through your skin or to hurt you. Our coating works even when it’s completely dunked in water, it will not shock you, and our layered construction means the conductive cloth does not come into contact with your skin.

“We hope to have this reach consumers as a real product in the next few years. Maybe it will be two years to a prototype, and five years to the consumer. I think this is the most consumer-ready device we have. It’s ready to take to the next phase.”

Until recently, textile scientists have not used vapor deposition because of technical difficulties and high cost of scaling up from the laboratory. But recently, manufacturers are finding that the technology can be scaled up while remaining cost-effective, the researchers say. Using the vapor deposition method described in their paper, Andrew and colleagues also coated threads of a thick cotton yarn commonly used for sweaters. It performed well and offers another avenue for creating heated clothing, the authors state.

Andrew said, “One thing that motivated us to make this product is that we could get the flexibility, the nice soft feel, while at the same time it’s heated but not making you sweaty. A common thing we hear from commuters is that in the winter, they would love to have warmer fingers.” In their laboratory tests, her research team reported, four fingers of the test glove warmed to the same temperature as the palm, and “the wearer could feel the heat transferred from the fabric heaters to her fingers a few seconds after the voltage was applied.”

Andrew and chemistry postdoctoral researcher Lushuai Zhang, with chemical engineering graduate student Morgan Baima, conducted several tests to assure that their gloves could stand up to hours of use, laundering, rips, repairs and overnight charging. Andrew noted, “Right now we use an off-the-shelf battery that lasts for eight hours, but you would need a rechargeable to make these more practical.”

Further, “If you are skiing and rip your glove, you can repair it just by sewing it back together with plain thread.”

They arranged for biocompatibility testing at an independent lab where mouse connective tissue cells were exposed to PEDOT-coated samples and responses compared to positive and negative controls. They report that their PEDOT-coated materials are safe for contact with human skin without causing adverse reactions to the chemicals used.

They also addressed questions of heat, moisture and skin contact stability to prevent the wearer from experiencing any electric shock from a wet conducting element. Andrew said, “Chemically, what we use to surround the conductive cloth looks like polystyrene, the stuff used to make packing peanuts. It completely surrounds the conducting material so the electrical conductor is never exposed.”

Experimenting with different variables in the vapor nano-coating process, they found that adjusting temperature and chamber pressure were important in achieving optimal surface coverage of the cloth. In a test of the fabric’s ability to resist cracking, creasing or other changes when heated, they generated a temperature of 28 degrees C (82.4 F) with connection to a 4.5-V battery and 45 degrees C (113 F) connected to a 6-V battery for an hour, and found “no dramatic morphology changes,” indicating that the PEDOT-coated cotton textile was rugged and stable enough to maintain its performance” when used as a heating element.