Combined with newly available energy harvesting products, these devices provide comparable performance to wired installations with significant cost benefits. These wireless instruments and networks are allowing industrial customers to manage operations and business processes that were very difficult and expensive to monitor with wired instruments (Figure 1).

This new paradigm of installing wireless instruments as needed, which is known as Pervasive Sensing, is leading the implementation of the Industrial Internet of Things (IIoT) for process automation and control industries. It allows companies to extend their focus beyond traditional process control and safety systems to cost-effective monitoring of thousands more process variables. This new strategy can be used to address other important business-critical applications such as site safety, security, reliability, and energy efficiency in oil and gas, refining, chemical, power, mining, and other industries. Pervasive Sensing applications also provide customers with more data for increased visibility, allowing for safer, more reliable, and higher efficiency operations—ultimately increasing profitability.

The ability to monitor and manage these added business parameters can have a tremendous impact. For example, according to the U.S. Energy Information Administration (EIA), 50 percent of the world’s energy is consumed by industrial facilities, while the International Energy Agency (IEA) estimates that a 50 percent improvement in energy use is still possible in these same facilities. Potential energy improvements can only come through better monitoring and ultimately control of energy use.

Sensor innovations are key to Pervasive Sensing applications, and there are several distinct attributes that are enabling this revolution including:

Using WirelessHART networking, these devices provide a uniform customer experience, including interoperability with the large installed base of wired HART devices. WirelessHART devices are compatible with most control systems including legacy systems. These wireless devices have the potential to dramatically improve the management of previously infrequent monitored parameters.

Today’s wireless transmitters are so capable that customers can deploy them in many places where they would have used traditional wired counterparts. In so doing, they can enjoy two significant benefits—simplicity of installation (and associated cost benefits) and time savings. By eliminating the need to engineer and wire signal and power, wireless transmitters can be deployed for half the cost or less and can be operational in much less time than wired products.

However, one advantage of a wired system is that it is powered continuously whereas wireless devices have batteries with a finite power capacity. While it is possible to achieve a battery life of up to 10 years using specialized batteries and low data update rates, fast update rates can reduce a battery’s life. Low data update rates also limit the use of wireless transmitters in control loops where real-time updates are needed.

Battery life is one the few factors that limits wireless utilization. Customers want all the benefits of wireless deployments but not at the expense and inconvenience of battery replacement. To address situations where a longer-lasting power source is needed, companies are now employing thermoelectric energy harvesting with its wireless transmitters.

Energy harvesters are devices that produce electrical power from nearby and unused energy sources. Prominent technologies include thermal, solar, vibration, and RF energy harvesting. While all of these technologies have value, thermal harvesting has particular applicability for industrial process environments.

Heat sources are pervasive throughout industrial facilities and can be found on rotating equipment such as motors, fans, compressors, and pumps, as well as pipes carrying steam and other heated process fluids. Even surfaces that are not always heated, such as exhaust vents on intermittently used equipment, can contribute substantial energy that can be captured with an energy harvester.Thermal harvesters generate electricity from temperature differences between industrial heat sources and the ambient air. At any temperature warm to the touch, a thermoelectric energy harvester (Figure 2) will typically produce all the power required by the transmitter. This is true even at fast transmitter update rates.

Configurations are available for a wide range of potential heat sources including flat or cylindrical surfaces at temperatures up to 450°C (845°F). Because these solutions work in tandem with a battery, they have the additional security of redundant power, ensuring continuous operation even in the event of a disruption of heat to the energy harvester.

With the addition of these new solutions, companies can significantly strengthen important wireless sensing attributes. First, wireless transmitters go from being battery-dependent to being self-powering, which provides power autonomy and energy independence. Second, self-powering devices directly reduce required maintenance because with transmitter energy independence, battery replacements are much less frequent or even eliminated—saving costs and reducing disruptions.

Figure 3 shows the battery life (in years) of a Rosemount 3051S wireless pressure transmitter with energy harvesting. With as little as a 35°C (63°F) heat source to ambient temperature differential, the transmitter operates at a two-second update rate without using back-up battery power.

Adding energy harvesting to wireless transmitters makes it possible to fulfill the IIoT and Pervasive Sensing strategies of monitoring anything, anywhere. Wireless transmitters can now be installed in places where wired transmitters are too costly or where access by technicians to replace batteries is difficult. 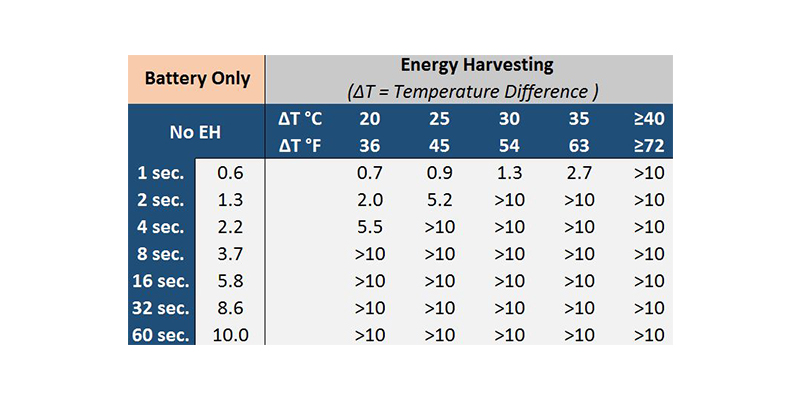