UC Berkeley engineers have given new meaning to the term “working paper.” Using inexpensive materials, they have fabricated foldable electronic switches and sensors directly onto paper, along with prototype generators, supercapacitors and other electronic devices for a range of applications.

Research to develop paper electronics has accelerated in the last 10 years. Besides its availability and low cost, paper offers an intriguing potential: simply folding it could switch circuits on and off or otherwise change their activity—a kind of electronic origami.

But most efforts to fabricate electrodes onto paper with sufficient conductivity for practical use have employed expensive metals such as gold or silver as the conducting material, swamping the potential savings of paper as a substrate.

This new technology uses the inexpensive element molybdenum as the source of the conducting metal. It is added to gelatin in solution and binds to carbon in the gelatin. The paper is then coated with the solution and dried. A laser beam precisely “writes” the desired circuitry patterns, heating the molybdenum to about 1,000 degrees centigrade and forming conductors of durable molybdenum carbide.

The laser-written circuits are about 100 microns wide—about the diameter of a human hair. All the unheated portions of the paper remain non-conductive. The gelatin coating not only provides the carbon for the conductive compound but also prevents the laser beam from burning the paper.

“Without the gelatin, the paper would turn into ashes,” says Liwei Lin, professor of mechanical engineeringand senior author of a paper in the journal Advanced Materials reporting the versatile new technology. 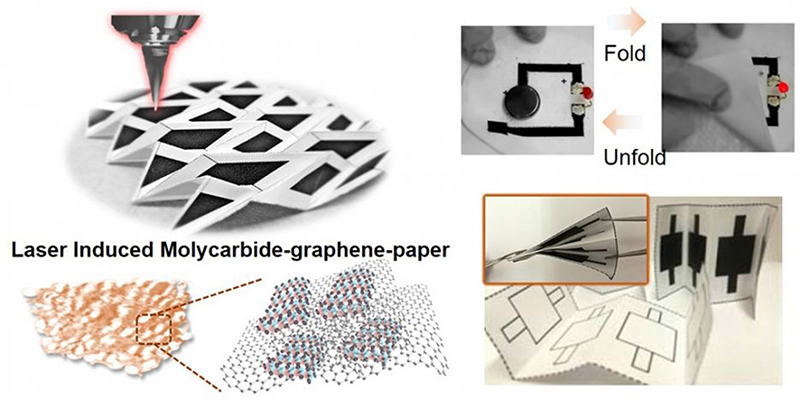 Berkeley engineers used a laser to “write” the circuitry for an electronic switch onto paper. They showed that folding and unfolding the paper could turn the circuit on and off. Credit: Xining Zang

A “working paper” that does actual work

The engineers envision widespread potential for the new, disposable paper electronics. For example, circuitry to detect heavy metal contamination could be “written” on paper to economically monitor toxins.

A sensor made of several electrodes integrated onto a paper circuit could detect unsafe lead levels in a drop of water—or in a drop of a patient’s blood, says Xining Zang (M.S. ’14, Ph.D. ’17 ME), who led the research as a Berkeley mechanical engineering graduate student in Lin’s lab.

“The electrodes would have small gaps between them, and the presence of heavy metal in the sample would complete the circuit,” she explains.

Zang, lead author of the journal article, is now a postdoctoral scientist at MIT.

The new paper electronics strategy emerged from Lin’s research on new types of switches, generators and batteries, and Zang’s focus on new materials, along with a joint interest in the growing field of applying origami to electronic and mechanical applications.

“Many people have been carrying out origami research, forming different architectures and different shapes to perform different functions,” Lin says. “Our work provides a versatile and easy path to define conductive areas on the paper. We’ve now shown both the practicality of writing versatile conductive patterns on paper, and the durability of folding the electronic paper many hundreds of times for switching circuits on and off.”

He hopes the demonstrations can attract attention for use in capacitors and batteries. Batteries are essentially composed of positive and negative electrodes separated by a small gap containing an electrolyte. In a paper battery, he says, a positive and a negative electrode could each be printed on paper such that folding the paper would create the small gap needed between them.

Zang brought her research on origami and new materials to bear on the paper electronics project. She wants to integrate components for energy generation, storage and functional use, such as a sensor, all on a single piece of paper.

“A self-contained, disposable sensor could be very useful in developing countries where portable, storable and inexpensive public health tools are in particular demand,” she says.