How will NASA’s James Webb Space Telescope shed the heat generated by its science instruments and their supporting electronics? To anyone who is not an engineer or scientist, the answer might be complex and “baffling,” and it turns out the process is exactly that.

Webb’s four science instruments are held within a support structure called the integrated science instrument module (ISIM), located behind the telescope’s primary mirror. The ISIM and Webb’s optics form the science payload of the observatory. To keep heat away from the sensitive instruments, a majority of the electronics used to power and operate the instruments are housed in a compartment below ISIM, where specially designed baffles direct the heat safely into space and away from any cold surfaces of the observatory.

The baffles essentially act as mirrors to reflect the heat (infrared radiation) outward in a specific direction. If that sounds familiar, it is because Webb’s mirrors will do very much the same thing—but instead of reflecting the infrared light into space, they will guide it with pinpoint accuracy to the telescope’s science instruments.

“Gold has a very high reflectivity in the infrared spectrum range, so it is ideal for directing heat,” explained Matthew Stephens, a mechanical systems engineer for Webb at NASA’s Goddard Space Flight Center in Greenbelt, Md. “This is the same reason all of the primary, secondary, and tertiary mirrors are gold-coated.” 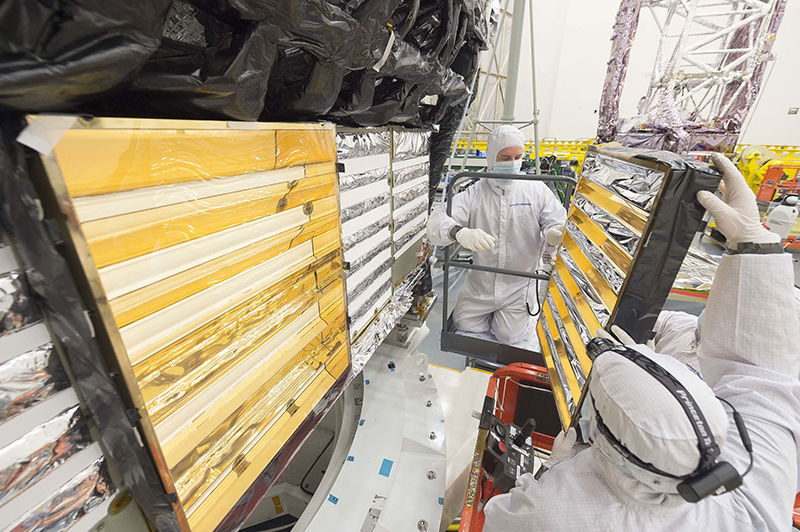 Engineers carefully hold onto a gold-plated baffle as they use a scissor lift to access the back of the integrated science instrument module (ISIM) of NASA’s James Webb Space Telescope. They are in the process of reinstalling the baffles, which direct the heat generated by the instrument electronics safely into space and away from any cold areas of the infrared telescope. Credit: NASA/Chris Gunn

The engineers in this photo are reinstalling the baffles, which had been previously removed and safely stored in a clean environment to protect them from any contamination during integration and testing of the science payload. The clear plastic sheets placed over the baffles will protect them from any contamination during the remaining integration and testing phases for the observatory.

The engineers had to reinstall the baffles before Webb’s science payload and its spacecraft element (the combined spacecraft bus and sunshield) are integrated at Northrop Grumman Aerospace Systems in Redondo Beach, California, where both halves of the observatory currently reside. If the engineers wait until after integration, Webb’s tennis-court-sized sunshield will obstruct the ISIM electronics compartment and make reinstalling the baffles much more difficult.

Feature Photo Credit: Engineers reinstall one of the gold-plated baffles that helps direct heat away from the integrated science instrument module (ISIM) of NASA’s James Webb Space Telescope. The baffles direct the heat generated by the instrument electronics safely into space and away from any cold areas of the infrared telescope. Credit: NASA/Chris Gunn