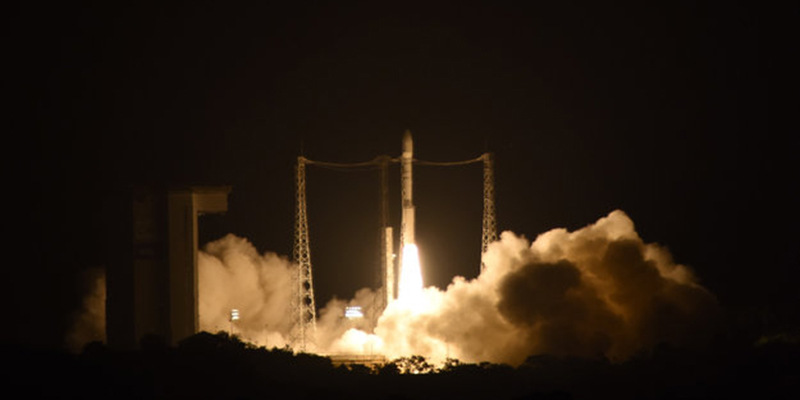 ESA’s LISA Pathfinder lifted off on December 3 on a Vega rocket from Europe’s spaceport in Kourou, French Guiana, on its way to demonstrate technology for observing gravitational waves from space.

Gravitational waves are ripples in the fabric of spacetime, predicted a century ago by Albert Einstein’s General Theory of Relativity, published on December 2, 1915.

Einstein’s theory predicts that these fluctuations should be universal, generated by accelerating massive objects. However, they have not been directly detected to date because they are so tiny.

For example, the ripples emitted by a pair of orbiting black holes would stretch a million kilometer-long ruler by less than the size of an atom.

LISA Pathfinder will test the extraordinary technology needed to observe gravitational waves from space. At its core is a pair of identical 46 mm gold–platinum cubes separated by 38 cm, which will be isolated from all external and internal forces acting on them except one: gravity.

The mission will put these cubes in the purest free-fall ever produced in space and monitor their relative positions to astonishing precision, laying the foundations for gravitational wave observatories in space.

Such future missions will be key partners to the ground sites already searching for these elusive cosmic messengers. Space and ground experiments are sensitive to different sources of gravitational waves, both opening up new possibilities to study some of the most powerful phenomena in the Universe.

The Vega launcher lifted off at 04:04 GMT (05:04 CET). About seven minutes later, after separation of the first three stages, the first ignition of Vega’s upper stage propelled LISA Pathfinder into a low orbit, followed by another ignition about one hour and forty minutes into the flight.

The spacecraft separated from the upper stage at 05:49 GMT (06:49 CET). Controllers at ESA’s operations centre in Darmstadt, Germany then established control.

Over the next two weeks, the spacecraft itself will raise the orbit’s highest point in six critical burns.

The final burn will propel the spacecraft towards its operational location, orbiting around a stable virtual point in space called L1, some 1.5 million kilometers from Earth towards the Sun.