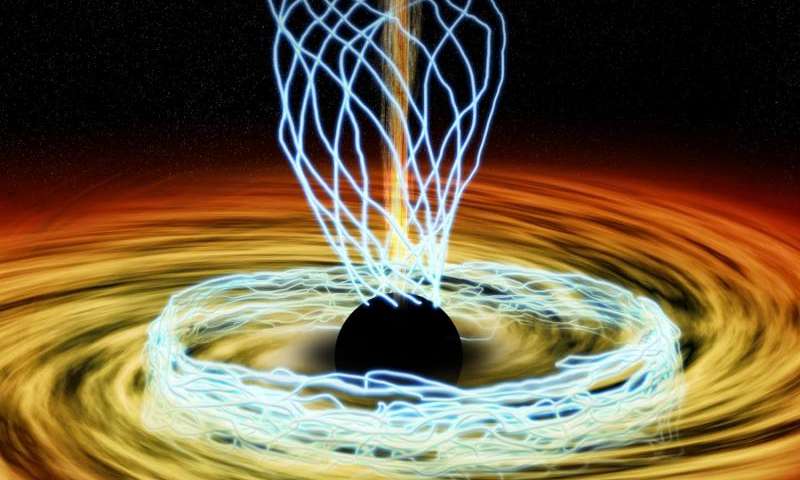 In this artist’s conception, the black hole at the center of our galaxy is surrounded by a hot disk of accreting material. Blue lines trace magnetic fields. The Event Horizon Telescope has measured those magnetic fields for the first time with a resolution six times the size of the event horizon (6 Schwarzschild radii). It found the fields in the disk to be disorderly, with jumbled loops and whorls resembling intertwined spaghetti. In contrast, other regions showed a much more organized pattern, possibly in the region where jets (shown by the narrow yellow streamer) would be generated. Credit: M. Weiss/CfA

Most people think of black holes as giant vacuum cleaners sucking in everything that gets too close. But the supermassive black holes at the centers of galaxies are more like cosmic engines, converting energy from infalling matter into intense radiation that can outshine the combined light from all surrounding stars. If the black hole is spinning, it can generate strong jets that blast across thousands of light-years and shape entire galaxies. These black hole engines are thought to be powered by magnetic fields. For the first time, astronomers have detected magnetic fields just outside the event horizon of the black hole at the center of our Milky Way galaxy.

“Understanding these magnetic fields is critical. Nobody has been able to resolve magnetic fields near the event horizon until now,” says lead author Michael Johnson of the Harvard-Smithsonian Center for Astrophysics (CfA). The results appear in the Dec. 4th issue of the journal Science.

“These magnetic fields have been predicted to exist, but no one has seen them before. Our data puts decades of theoretical work on solid observational ground,” adds principal investigator Shep Doeleman (CfA/MIT), who is assistant director of MIT’s Haystack Observatory.

This feat was achieved using the Event Horizon Telescope (EHT) – a global network of radio telescopes that link together to function as one giant telescope the size of Earth. Since larger telescopes can provide greater detail, the EHT ultimately will resolve features as small as 15 micro-arcseconds. (An arcsecond is 1/3600 of a degree, and 15 micro-arcseconds is the angular equivalent of seeing a golf ball on the moon.)

Such resolution is needed because a black hole is the most compact object in the universe. The Milky Way’s central black hole, Sgr A* (Sagittarius A-star), weighs about 4 million times as much as our Sun, yet its event horizon spans only 8 million miles – smaller than the orbit of Mercury. And since it’s located 25,000 light-years away, this size corresponds to an incredibly small 10 micro-arcseconds across. Fortunately, the intense gravity of the black hole warps light and magnifies the event horizon so that it appears larger on the sky – about 50 micro-arcseconds, a region that the EHT can easily resolve.

The Event Horizon Telescope made observations at a wavelength of 1.3 mm. The team measured how that light is linearly polarized. On Earth, sunlight becomes linearly polarized by reflections, which is why sunglasses are polarized to block light and reduce glare. In the case of Sgr A*, polarized light is emitted by electrons spiraling around magnetic field lines. As a result, this light directly traces the structure of the magnetic field.

Sgr A* is surrounded by an accretion disk of material orbiting the black hole. The team found that magnetic fields in some regions near the black hole are disorderly, with jumbled loops and whorls resembling intertwined spaghetti. In contrast, other regions showed a much more organized pattern, possibly in the region where jets would be generated.

They also found that the magnetic fields fluctuated on short time scales of only 15 minutes or so.

“Once again, the galactic center is proving to be a more dynamic place than we might have guessed,” says Johnson. “Those magnetic fields are dancing all over the place.”

These observations used astronomical facilities in three geographic locations: the Submillimeter Array and the James Clerk Maxwell Telescope (both on Mauna Kea in Hawaii), the Submillimeter Telescope on Mt. Graham in Arizona, and the Combined Array for Research in Millimeter-wave Astronomy (CARMA) near Bishop, California. As the EHT adds more radio dishes around the world and gathers more data, it will achieve greater resolution with the goal of directly imaging a black hole’s event horizon for the first time.

“The only way to build a telescope that spans the Earth is to assemble a global team of scientists working together. With this result, the EHT team is one step closer to solving a central paradox in astronomy: why are black holes so bright?” states Doeleman.