EXAIR’s Gen4 Static Eliminators eliminate static. When static is a problem on moving webs, sheet stock, three dimensional parts, extrusions or packaging, EXAIR has a solution. The Gen4 static eliminators have undergone independent laboratory tests to certify it meets the rigorous safety, health and environmental standards of the USA, European Union and Canada that are required to attain the CE and UL marks. They are also RoHS compliant. 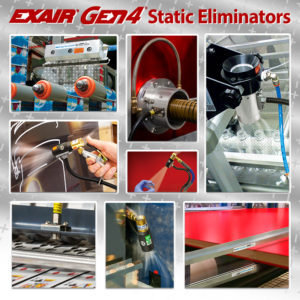 Combining EXAIR’s engineered airflow products with ionizers gives the ability to eliminate a static charge quickly and from great distances. Laminar flow airstreams make it possible to blow away any contaminants and eliminate the charge that attracts them.

Compressed air consumption and noise are minimized while providing force that can be adjusted from a “blast” to a “breeze”. Tests show these ionizers positioned two feet (610mm) away from a charged surface to be as effective as a Gen4 Ionizing Bar without air delivery positioned one-half inch (13mm) from the surface.