Mitsubishi Electric Automation introduced the F-series high-performance industrial robots for extremely dexterous, complex operations. These robots incorporate features that make it easier to perform applications that had previously been difficult or impossible. One such feature, the force sensor, in combination with coordinated motion and automatic collision avoidance, allows the creation of densely packed robot cells that can perform highly dexterous operations. These tasks are typically performed by an operator in a cellular manufacturing work cell.

Other key features include: 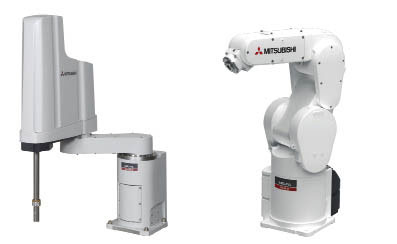 The robots are offered in both vertical and horizontal configurations, and are suitable for material handling, machine tending, assembly, picking, packing, kitting, dispensing, inspection, and other applications. They are also designed for more efficient manufacturing. For example, they require shorter startup times compared to fixed automation, and use less energy and generate less scrap than manual operation.