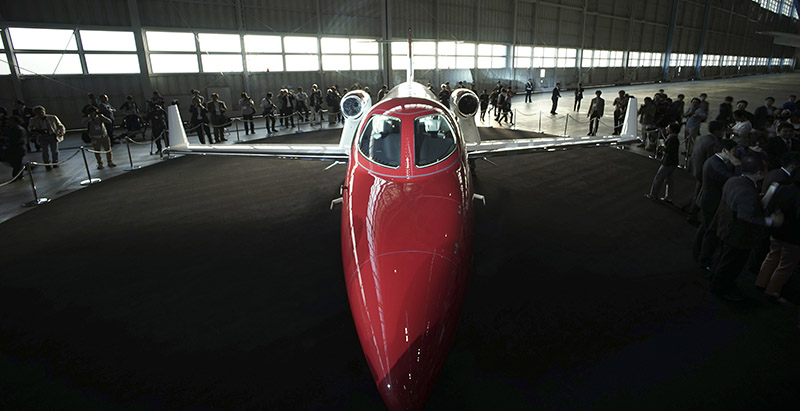 In this April 23, 2015 photo, a HondaJet is displayed at the venue of a press conference at Haneda international airport in Tokyo. (AP Photo/Eugene Hoshiko, File)

Nearly 30 years after Honda’s founder started developing the product and after more than a dozen years of testing, the company best known for its cars and motorcycles is about to start delivering its first aircraft.

The Japan-based company this week is expected to receive a crucial Federal Aviation Administration certification of its first HondaJet, the last step before launching full production from its manufacturing hub and headquarters in Greensboro, North Carolina, where it employs more than 1,000. A company announcement is expected Wednesday.

The business jet, which can seat up to seven and lists for about $4.5 million, will be reaching customers at least five years behind schedule. Honda says it has received more than 100 orders, primarily from customers in North America and Europe.

Michael Whalen, a hospitality industry executive, says he placed a deposit for a HondaJet in 2007 to replace his slower, propeller-driven King Air. Whalen is founder and CEO of a company that runs hotels and restaurants in a half dozen Midwestern states from Moline, Illinois, a city with few direct flights. Now his Heart of America Group is expanding into Wyoming, Colorado and Texas.

“In the last year or so it certainly would have been coming in handy, so I’ve been inquiring quite regularly as to when they thought it was coming,” said Whalen, who now expects delivery in March.

HondaJet’s model HA-420 is expected to be the first in a line of Honda aircraft. That could make the quality-conscious, price-competitive company a player in aviation since “anywhere Honda gets into, they tend to grab a significant market share fairly quickly,” said Wayne Plucker, who heads aerospace industry research at the consulting firm Frost & Sullivan. Honda touts its plane as lighter, faster and more fuel-efficient than competitors that include U.S.-based Cessna and Embraer of Brazil.

Just as Honda did when it introduced its cars into North America decades ago, its aircraft subsidiary has stayed low-key, careful and methodical for an industry that tends toward hoopla and splashy sales announcements at air shows, Plucker said.

The HondaJet reaches the market after sales of similar light jets have struggled to rebound from the global financial crisis, Alud Davies, who covers the business aviation industry for the London-based online publication Corporate Jet Investor, wrote in an email.

Up to 9,200 new business jets worth $270 billion will be delivered worldwide in the next decade, according to Honeywell International, which produces aerospace components and an annual industry forecast. About a quarter of those sales will be small-cabin aircraft like the HondaJet, and about 60 percent of the demand in the next five years will be in North America, the report said.

Entering the aviation market was a goal of founder Soichiro Honda, and HondaJet’s development began several years before his death in 1991. Honda sent engineer Michimasa Fujino to the United States to design an experimental aircraft.

Fujino, now Honda Aircraft Co.’s CEO, brought innovation by positioning the engines above the wings rather than beneath them and drew inspiration for the porpoise-nose body design from a Salvatore Ferragamo high-heel shoe. The prototype flew in 2003. Fujino did not respond to requests for an interview.

Along the way, Honda formed a joint venture with GE Aviation to build the engines in nearby Burlington. Those engines also are being sold to retrofit jets by other aircraft-makers.

While the HondaJet should attract owners just entering the business jet market, much as the Honda Civic drew new car buyers when the company was new to the U.S. market, its comfort and features make it more comparable to Honda’s Acura-branded cars, Plucker said. The prototypical buyer is likely to be an entrepreneur who sees the jet as an expression of innovation, he said.

“I think it’s a flying piece of art,” Whalen said. “It’s the revolutionary plane that they promised when they first announced it.”