More than three years after a coroner declared a teenage girl dead, a Northern California judge is expected to soon decide whether to revoke her death certificate.

Shewmon is a longtime critic of how brain death is defined and has filed similar court papers supporting efforts by McMath’s family to undo the death certificate. The family has previously shown video clips of McMath twitching her fingers, which they said showed she still has brain function.

Several doctors, including two hired by an Alameda County court, have said brain-dead patients can still twitch and move slightly.

Jahi’s mother has previously acknowledged that her daughter’s brain is severely and irreparably damaged. But Latasha Spears Winkfield said her daughter is still alive and her Christian belief compels her fight to keep her daughter on life support.

The case adds to the debate over parents’ right to choose childrens’ medical treatment. The parents of 11-month-old Charlie Gard announced Monday they were dropping their legal fight in London to stop doctors from switching off their baby’s life support. They previously resisted, arguing that an experimental treatment could extend and improve Charlie’s life. 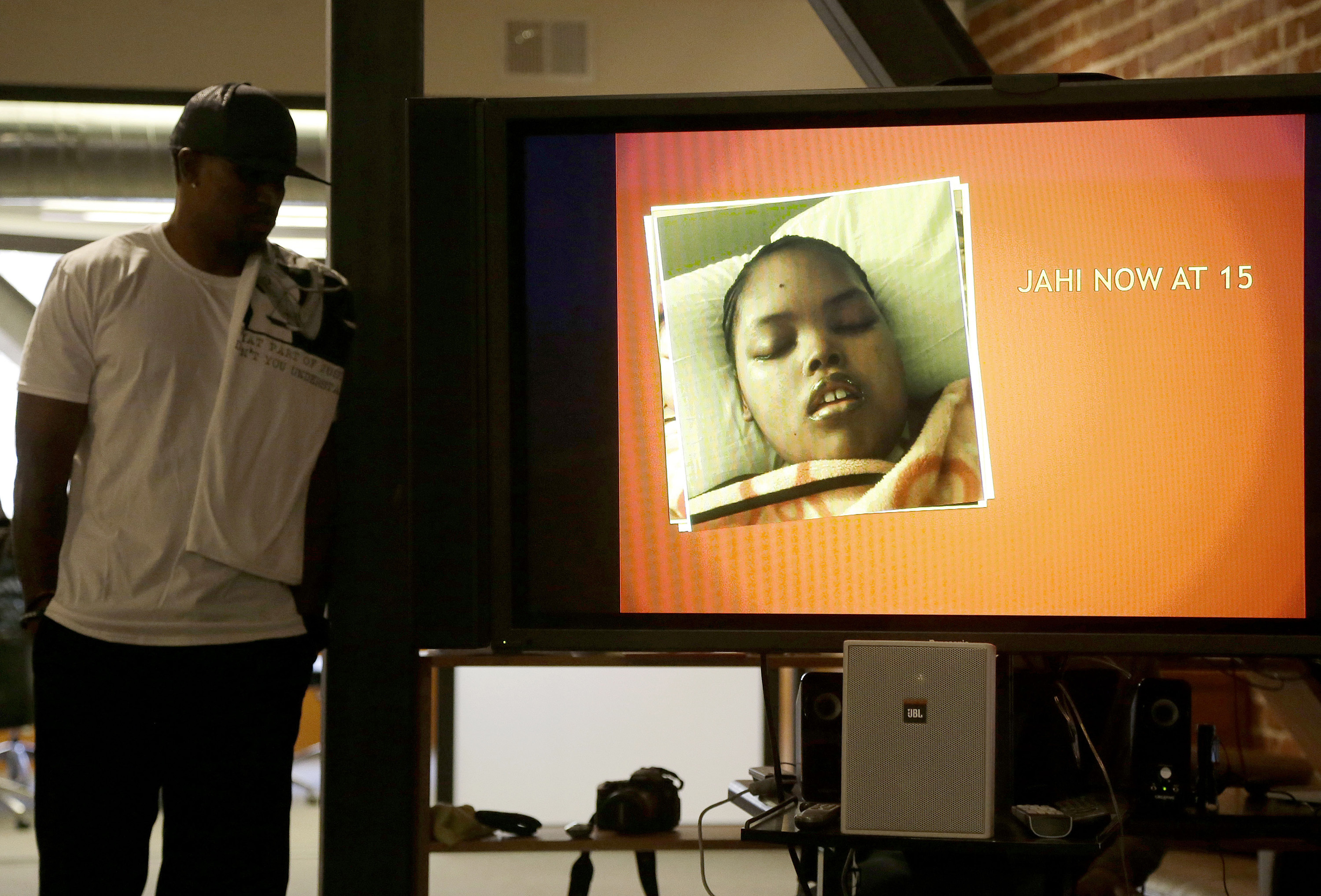 In this Dec. 23, 2015 file photo, a recent photo of Jahi McMath is shown on a video screen next to her uncle Timothy Whisenton at a news conference in San Francisco. More than three years after a coroner declared the teen girl dead, a Northern California judge is deciding whether to revoke her death certificate. In court documents filed in June 2017, retired neurologist Dr. Alan Shewmon says videos recorded by Jahi McMath’s family from 2014 to 2016 show McMath is still alive. (AP Photo/Jeff Chiu, File)

Lawyers for the California hospital argued in court documents that the family’s attorneys have declined to turn over to them the most recent video clips Shewmon said he viewed. The lawyers also said they want copies of the videos so they can independently analyze the footage.

Still said McMath was “typically covered up with blankets” in videos previously shown by the family, making it impossible to determine if something might have been occurring under the blankets to make the body move.

“Often the camera only shows a convenient angle, such as a close up of her foot or hand,” Still wrote.

Still said in an interview Monday that since the family has not subjected McMath to tests accepted by the American Medical Association to determine whether someone is brain dead.

Jahi’s family moved her to New Jersey because of that state’s only-in-the U.S. law that prohibits doctors from removing brain-dead patients from ventilators over families with religious objections. Court records show that New Jersey Medicaid has picked up some of the cost of McMath’s care. Still said she could not disclose the exact amount.

A judge heard arguments on the case July 13 and is expected to rule in the next two months whether to allow the lawsuit to proceed.