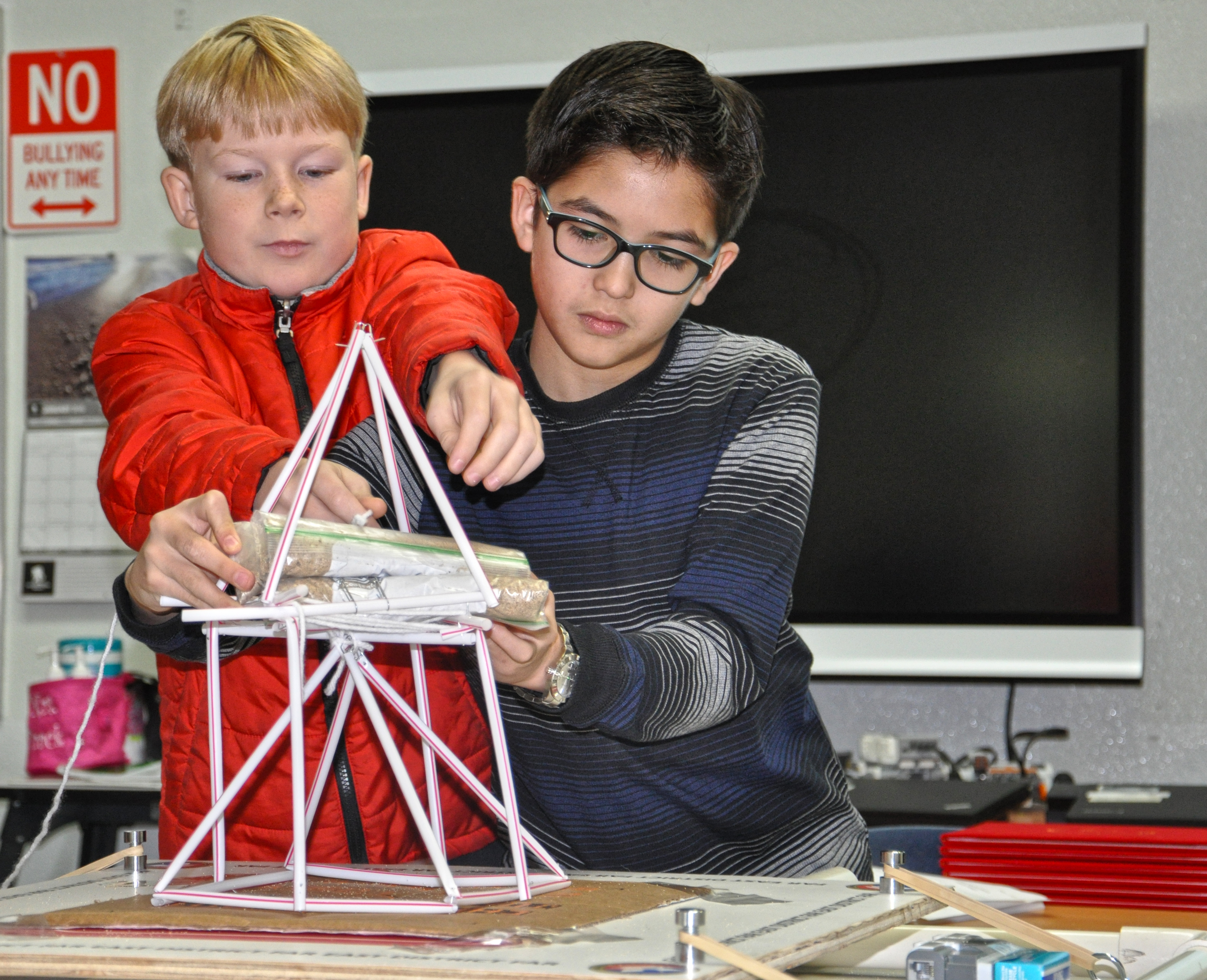 Students were tasked to build structures out of straw, paper clips and straight pins, and district engineers tested their ability to hold sandbags and withstand an earthquake on a specially designed shaker table.

“The thing just exploded after eight [sandbags],” said Charles Floyd, a middle school student in the applied technology class. “Squares are bendable. Triangles aren’t. Studying geometry helped me because I know the three-sided figures, the triangles, are sturdier. All this connects to engineering.”

While Floyd’s father was on hand for the competition, both of his parents encouraged their son’s interest in STEM-related activities and education.

“His mom is an engineer, so math and science are focal points of his education,” said Charles’ father, Sgt. 1st Class Daniel Floyd.

“He’s definitely getting challenged,” Floyd said. “Projects like this make me feel comfortable that my child is in a good place with his education. The teachers do a great job challenging him and pushing him harder.”

Charles Floyd said his dream is to one day work for NASA, which is a goal that is fine with his father. “Who doesn’t want their son to be a rocket scientist,” he asked.

“I learned a lot about teamwork,” Sullivan said. “My partner and I helped each other out quite a bit. This is definitely my favorite class.”

Sullivan’s mother, Kristi Sullivan, is an interior designer and took part in similar activities as a student while studying for her degree. She said many of her interests rubbed off on her daughter.

“She [Hannah] has a natural ability for seeing how things are put together and making things strong,” she said. “My major was in commercial design and we had to do a lot of structural studies so maybe she is going to come by it more naturally.”

Pam Lovasz, STEM coordinator for the Far East District, said events like these will be incorporated into the school year all yearlong.

“Last month, we gave a presentation on earthquakes and provided tips on designing earthquake resistant structures to the students,” Lovasz said. “In the spring, we will hold our toothpick bridge competition. This is all part of the district’s outreach to students to hopefully spark interest in STEM-related classes and eventually careers in STEM. We hope to provide the students with a fun learning experience.”

The Far East District promotes STEM activities throughout all DoDDS schools in South Korea. Activities, such as these, are part of an education partnership agreement signed by the U.S. Army Corps of Engineers and DoDDS Korea. The partnership centers on support for the STEM initiative.