In modern life it seems that everything is going the wireless route: data communications, mobile device charging, and audio, just to name a few. The wireless audio market is booming, yet as you look around on a plane, train or even on the street, one of the simplest devices—headphones (or earbuds)—are still, for the most part, connected via a cable.

However, with the news that a major smartphone manufacturer has dropped the incredibly long-serving 3.5 mm headphone jack from its latest product, things are about to change. This bold but logical step is recognition that technology has reached a point where wireless earbuds—a tiny pair of wireless speakers that fit inside the ear—are now able to offer the audio performance, benefits, and functionality required in a viable form factor to support music playback, streaming, and more. In addition, dispensing with the earphone jack makes it easier to improve the water resistant characteristics of smartphones and other portable/wearable devices; this is an important benefit when such products are expected to perform in all kinds of outdoor environments. Finally, by going wireless, the frustration of dealing with tangled wires will become a thing of the past!

Until now, the main focus of manufacturers in the wireless audio market sector has been producing speaker systems, driven by consumer desire for portability and ease of installation (running and hiding unsightly wires around the home without damaging decor has always been a challenge).

The wireless audio market is clearly evolving and moving into a period of rapid growth, with the market expected to reach USD 54 billion by 2022. This in itself is significant, yet the 23.2 percent predicted compound annual growth rate (CAGR) is a better indication of the rate of future change and growth. Much of it is linked to the market for smartphones and other portable devices, moving the area of highest growth from home audio to the portable consumer segment. In fact, mobile devices have become important entertainment devices in their own right. One study from Grand View Research indicates that the earbud and headphone market alone will exceed USD 15 billion by 2024, citing technology advancements and miniaturization as being key drivers in the rapid growth potential of earbuds.

Wireless earpieces have been on the market for some time, with Bluetooth-based devices for hands-free smartphone use being one of the most popular applications. However, consumers are becoming more sophisticated and expecting more from their mobile audio experience. They are driven by some of the high-end headphones on the market today that offer great audio quality and have features such as noise cancellation and enhanced bass.

Like many of today’s wearable devices, the challenge to design and bring to market compelling earbuds is significant. On the one hand, consumers are looking for ultra-small devices with extended operating times, meaning that efficiency and low power operation are crucial. On the other hand (and potentially somewhat conflicting), they want features such as the deep, rich bass and noise cancellation. Noise cancellation introduces another level of complexity and requires the inclusion of a microphone and additional circuitry, all of which adds bulk and places greater demands on the battery.

One of the key differences between traditional headphones and earbuds is the expectation of versatility. Headphones are primarily optimized for music playback alone, yet a compelling earbud solution is expected to fulfill multiple functions including playback, streaming, wireless synchronized sound (WS2), the handling of phone calls, and interfacing with sensors. Wireless earbuds are also highly likely to incorporate voice command recognition technology.

Semiconductor solutions for earbuds must be low power and highly integrated due to the limited available space. They must also offer excellent processing power and audio performance, plus a range of other characteristics and features to support a high degree of functionality.

One of the newer semiconductor devices to reach the market and support the development and proliferation of earbuds is the LC823450 series of ultra-low power, high-resolution audio processors. Based around a dual core ARM Cortex-M3 processor and 32-bit DSP core, the system-on-a-chip (SoC) incorporates 1656 KB of SRAM and 256 KB of ROM. A highly integrated MCU within the SoC includes six 10-bit ADCs and a real-time clock, as well as three eMMC/SD interfaces.

At the heart of the system is an audio engine, capable of high-resolution audio processing (32 bit and 192 KHz). This features an MP3 encoder and decoders for MP3, WMA, and AAC formats. Also built into the audio engine is a significant amount of dedicated audio circuitry including a low-power Class D amplifier, asynchronous sample rate converter (ASRC) with a jitter-hiding function, six-band equalizer (EQ), and digital microphone PDM interface. 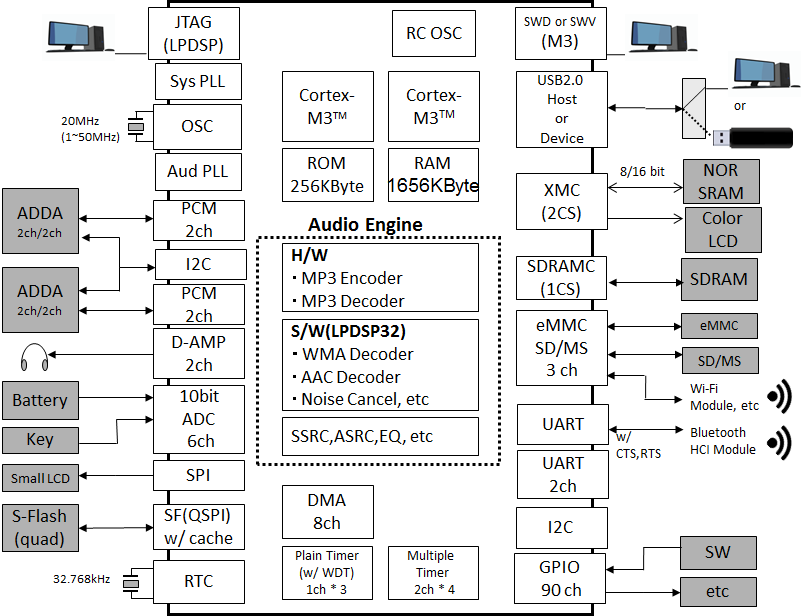 Despite high levels of functionality and integration, the semiconductor meets a key demand of earbud applications by remaining frugal in terms of power demands—typically consuming just 110 microwatts of power for each Megahertz of operating speed. As a consequence, audio playback times in excess of 120 hours are possible when used with two AAA batteries—around 70 percent more than some other products on the market (Figure 2). 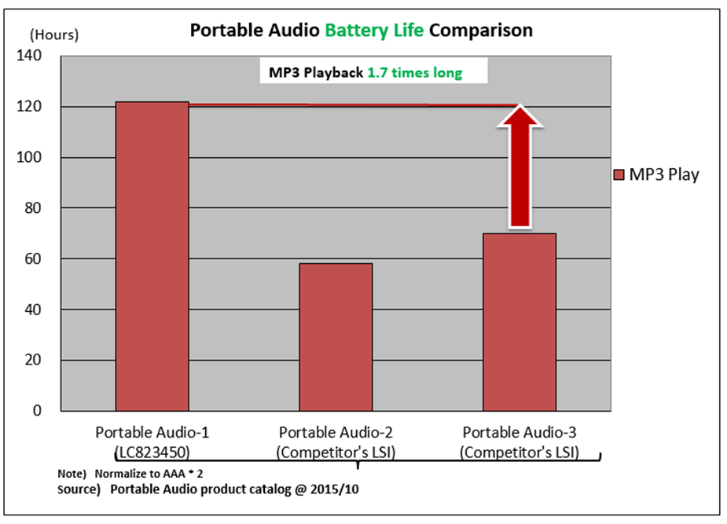 Figure 2: The LC823450 provides 70 percent longer playback time than that of other LSIs.

The footprint of the XC and XD versions of the device (just 5.52 mm x 5.33 mm) is substantially less than alternative solutions, especially when considering some other solutions do not offer on-board SDRAM. A large selection of advanced royalty- and license-free DSP code libraries are also available to help designers accelerate software design and minimize development costs; these include DSP codes for noise cancellation and variable speed playback. 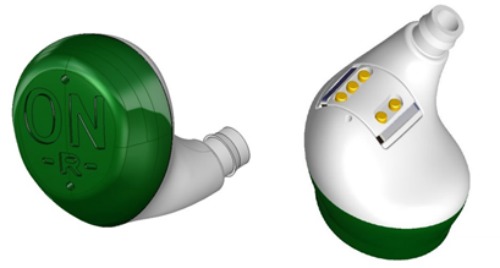 As greater functionality is required for a limited number of high-end applications, a number of support devices is needed for portable audio applications. One example of this is the “always listening” BelaSigna R281, a device that will detect a single user-trained trigger phrase, asserting a wake-up signal when detected. This extremely low-power device is intended for devices that respond to voice commands. 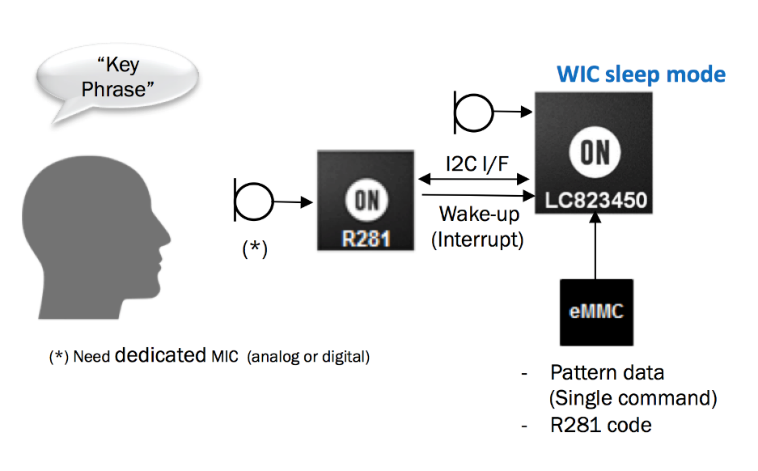 To conserve power, the main system is powered down, and the R281 listens for a particular phrase. When detected, the R281 sends a wake-up interrupt via a GPIO, and the main system takes over receiving, decoding, and actioning the voice commands.