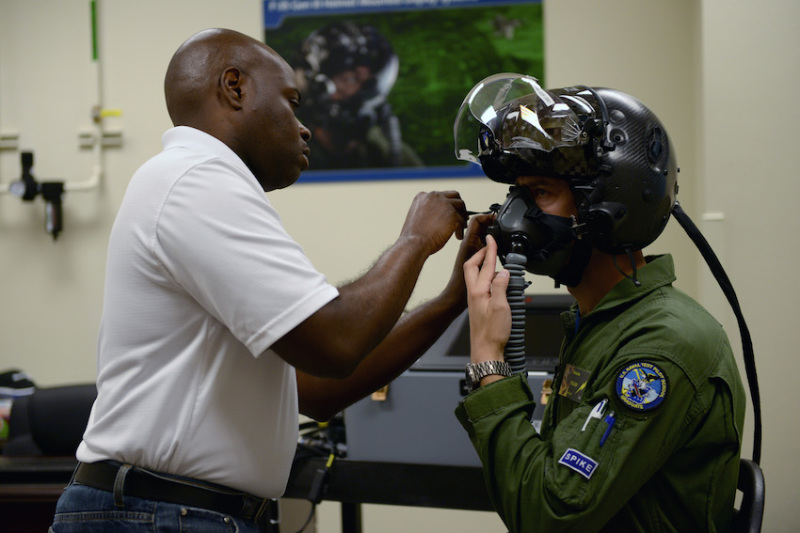 The new system, built and issued by Rockwell Collins at the Pilot Fit Facility, includes a number of upgrades, including improved night vision, optics and liquid-crystal displays.

“It’s Luke’s first,” said Donald Guess, Rockwell Collins customer support specialist. “It’s something that’s been coming for a while and something that all the pilots are going to want.”

The latest helmet takes the head-up display (HUD) usually projected onto on a piece of glass at the front of the cockpit, and puts it on the helmet. That means the pilot’s always has it in his field of vision, and can see useful data like the horizon, airspeed, altitude, and weapons status wherever he’s looking.

“I think the helmet is going to be an important factor in enhancing my situational awareness,” Hanche said. “I don’t have to look around. I can glance with my eyes and get the info I need.”

Feeds from any of six cameras located outside the jet can be piped into the helmet. It provides a 360-degree digital view of what’s going on around the aircraft. When the pilot looks down, he doesn’t see his knees, he sees “through” the aircraft floor and walls, and knows what’s below him. All the information pilots need to complete their missions is projected on the helmet’s visor.

Thanks to the helmet’s eye tracking capability, pilots using the system can look at a target to aim their weapons while maintaining spatial orientation of their surroundings and continually monitoring flight information.

“If your rifle scope is off, you’ll never hit your target,” Hanche said. “With this helmet, it’s going to be a lot more accurate than it used to be.”

Integrating the night vision capability right into the helmet is a major advantage for F-35 pilots. Built-in night-vision lets pilots see in the dark, without needing to flip down a set of goggles.

“I’ll now have access to two night vision options,” Hanche said. “An infrared image and a night vision image. Having those two available at any time is going to be really great.”

All of that technology is built into a carbon fiber helmet that weighs just about five pounds. It’s customized to each pilot, both to fit around the head, as well as to ensure that the visuals work properly
.
“The helmet itself looks like something from a sci-fi series,” Hanche said. “It looks impressive and it feels really good. It has a really great fit.”

The two-day fitting process measures things like the horizontal and vertical alignment of the pupils, eye spacing, and a litany of other variables.

The helmets are custom built for each pilot, so if yours is at home, you’re stuck on the ground.