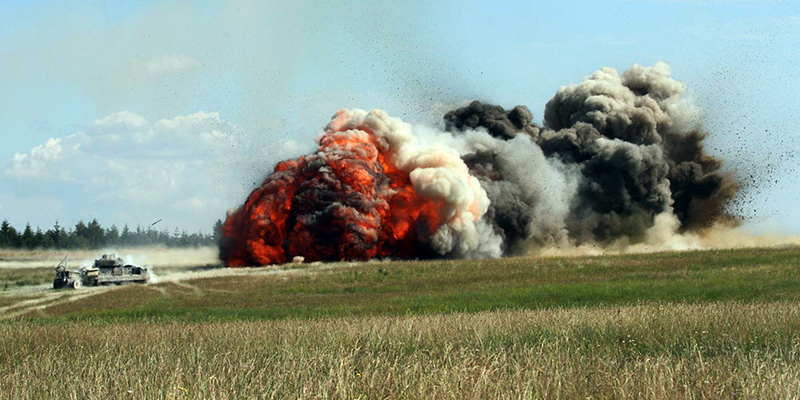 In June of last year, the Army opened the 12B combat engineer position to female Soldiers. Today, women are going through the school house at Fort Leonard Wood, Missouri, and joining units around the Army.

Pvts. Brianna Moore, Chrisslene Tialavea, and Lashonda Ivy are all recent graduates of the 12B course. All three enlisted last year around the time the MOS was opened to female Soldiers, and they are among the first women to be admitted to the 12B military occupational specialty.

Among other things, combat engineers construct fighting positions, fixed or floating bridges, obstacles and defensive positions; they place and detonate explosives; they conduct operations that include route clearance of obstacles and rivers; they prepare and install firing systems for demolition and explosives; and they detect mines visually or with mine detectors.

From Merrillville, Indiana, 18-year-old Ivy joined the Army, she said, for a lot of reasons — though she cited educational opportunities and financial stability as leading the pack. At her recruiter’s office last year, she didn’t know that the 12B MOS was opening to female Soldiers, and possibly didn’t know the MOS had ever even been closed to women. But her recruiter, she said, offered up an Army option to her that she said sounded enticing.

“My recruiter asked me if I wanted to blow stuff up,” Ivy said. “I thought that would be pretty cool — so I picked that MOS.”

Moore, from Tulsa, Oklahoma, now serves as a combat engineer with Company A, 3rd Engineer Battalion “Beaver,” 3rd Armored Brigade Combat Team, also at Fort Hood. Like Ivy, she said the educational opportunities in the Army appealed to her.

She enlisted in July of 2015. When she first approached the Army for a job, she said 12B wasn’t yet open to women. But when the career field did open, she dove in.

“When it opened up, that’s when I went for it,” she said. “I looked at the MOS and I thought it was pretty cool,” Moore said. “I figured if I was going to join the Army, I was going to do something that was kind of out there. We use explosives … for everything.”

Tialavea, originally from Queens, New York, now serves a combat engineer with Company B, 3rd Engineer Battalion “Beaver,” 3rd Armored Brigade Combat Team — right alongside Moore. Similar to Moore, she was interested in getting paid to work with explosives.

Tialavea and Ivy actually went through engineer school together — along with about 30 other female Soldiers. Moore, on the other hand, went through the 12B schoolhouse with nothing but guys. She said that wasn’t a problem, however — everyone, she said, acted like pros.

“We all worked together,” Moore said. “It was Soldiers working with Soldiers.”

Actually, Moore, Ivy and Tialavea all say that despite being among the first female Soldiers to go through the combat engineer course, they have seen nothing but support from their male counterparts who are already on the job.

“I love my platoon and my company,” Moore said. “They all accept me and we continue to work together without any problems.”

During a National Training Center rotation last year, Ivy said, the other Soldiers in her unit made sure she knew what to do. “My platoon was really supportive. They helped me,” she said. “I just got to my unit five days before I left for NTC. It was good bonding with them.”

Tialavea said she did get some pushback on her choice to be a 12B — from her family and friends.

“They didn’t really like the idea of me doing 12B, but I did it anyway,” she said. “I told them — – look at me, I made it. All it took, honestly, was a lot of motivation and stamina and willpower.”

And from her unit, Tialavea said — they’ve been on board with her since she came on board.

“So far I’ve been getting along with everybody in my platoon, and they are very supporting and accepting,” she said.

Moore has also been out to the NTC to train with her unit, where she said she served mostly in a support role. “We got to do a little bit of demolition and movement and formations and stuff, but we didn’t get to go ‘all out,'” she said. “We did our MOS, but we didn’t get to do it to the extreme.”

Ivy’s unit is now getting ready for the real thing in Afghanistan this September.

“We’re deploying soon,” she said. “We have the Route Reconnaissance and Clearance Course in about two to three weeks.”

After that, she said, it’s off to Afghanistan. She’s never left the United States before, she said, and her family is “really scared” for her. But she’s not worried, or at least not willing to admit it. “I’m ready,” she said.

Tialavea hasn’t yet gone to train with her unit at the NTC — though they are getting ready to go in September, and she is preparing alongside them for the event with a “whole lot of training.” Right now, she said, they are in the field “making sure we perform dismount training, driver training, and all kinds of training. Then we go to gunnery, and then we head to NTC.”

When not deployed, or at the NTC, Moore says as part of Company A, “we keep up on maintenance and take care of our vehicles that we drive, and we have specific times we go and train in the field — we keep it moving,” she said.

For the future, Moore wants to get an education and “make something out of whatever it is I pursue,” she said. She said she hopes to go into architectural and civil engineering in the future.

Tialavea says she plans to re-enlist at least once, and looks forward to one day being a staff sergeant. “That’s one of my goals,” she said. Another is to pursue a master’s degree in psychology.

Ivy said she wants to go to the Sapper School or to Ranger School — once she has attained the rank to allow her to do so.

Moore says that she can see herself, later in her Army career, serving as a mentor to other female soldiers who come into the Army — but now, she said, she’s focused on “learning my job, and being able to perform to the expectations.”

Tialavea said right now for her, “my job is driving and operating a Bradley and I find that to be really fun, a cool experience,” she said. “To me, this is a regular job — there is nothing special, I guess. But I can see myself serving as a role model for the women that do plan on being a 12B in the future, by doing the right thing and setting an example for them, and when it’s my time to become a leader, to just give them the mentorship.”