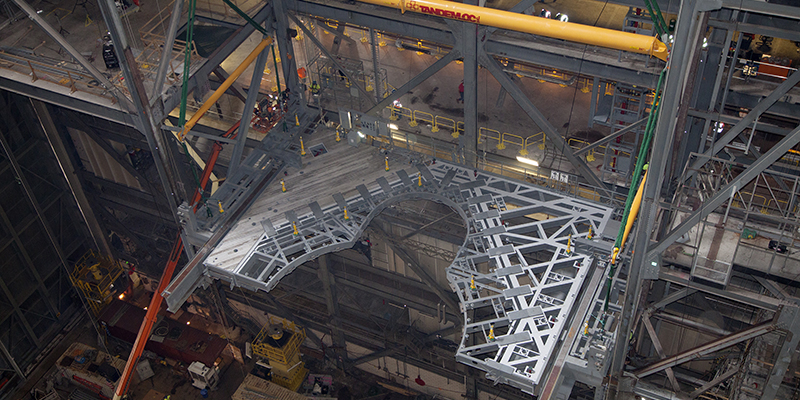 Inside the Vehicle Assembly Building at NASA’s Kennedy Space Center in Florida, the 325-ton crane lifts the first half of the K-level work platforms up for installation in High Bay 3 on Dec. 22. The platform will be secured into position on tower E, about 86 feet above the floor. Photo credit: NASA/Glen Benson

The first of ten work platforms that will provide access to NASA’s Space Launch System (SLS) rocket has been installed inside the Vehicle Assembly Building (VAB) at NASA’s Kennedy Space Center in Florida.

When the SLS arrives at Kennedy for processing prior to launch, it will be housed in the VAB atop the mobile launcher and will stand more than 350 feet above the ground. Engineers are installing platforms at key points along the body of the rocket to provide access needed for launch preparations.

Within the tallest portion of the VAB, the SLS rocket will reside in one of four vertical corridors, called high bays. High bay 3 will be home to the SLS rocket, and technicians will use High Bay 4 to prepare the mechanical, electrical and plumbing systems on each platform before it is installed.

The transfer aisle down the center of the VAB connects the bays, allowing massive components and equipment to be rolled into the building, lifted and assembled.

An overhead crane that can hold as much as 325 tons was used to lift the first half of the K-level work platforms from High Bay 4 through an opening in the divider between the bays approximately 19 stories up, across the transfer aisle, and then lowered it into High Bay 3. These cranes are critical to picking up the heaviest elements of rockets and placing them carefully into position.

The platform was secured into position, about 86 feet above the VAB floor, or nearly nine stories high. The K level work platform halves will provide access to the SLS core stage and solid rocket boosters during processing and stacking operations on the mobile launcher.

Working from the top down, the other platform levels are A through H and J. When the A level platform is installed, it will tower about 346 feet above the ground, or nearly 35 stories high. 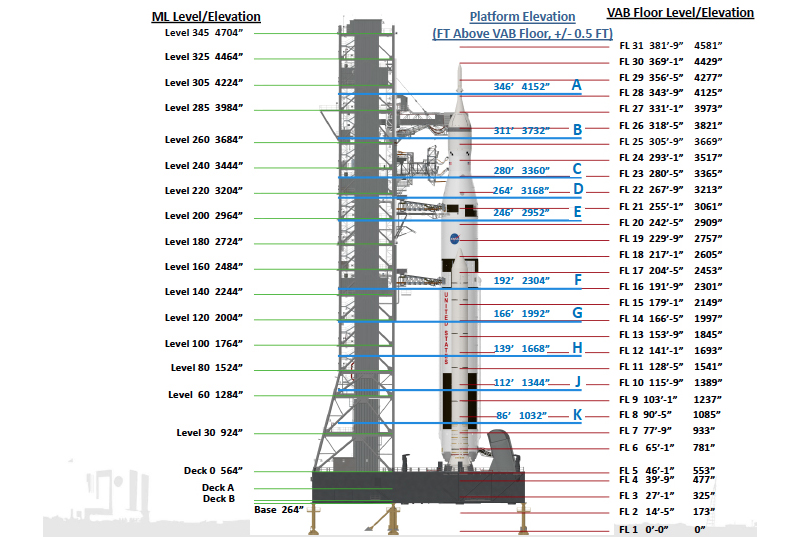 This diagram shows the 10 levels of work platforms that will surround NASA’s Space Launch System rocket and Orion spacecraft during processing and stacking on the mobile launcher in the Vehicle Assembly Building at Kennedy Space Center. Image credit: NASA

A total of 10 levels of new platforms — 20 platform halves altogether — will surround the SLS rocket and Orion spacecraft and provide access for testing and processing.

The giant steel platforms, each measuring 38 feet long and 62 feet wide, will be attached to rail beams that will provide structural support and contain the drive mechanisms to move them in and out or up and down as needed.

The Ground Systems Development and Operations Program is overseeing upgrades and modifications to the VAB, including installation of the new work platforms, marking preparations for the agency’s journey to Mars.

NASA awarded a contract to modify High Bay 3 to the Hensel Phelps Construction Co. of Orlando, Florida, in March 2014. Steel LLC, of Scottdale, Georgia, is the subcontractor fabricating the huge steel platforms, and Sauer Co. in Oak Hill, Florida, is assembling the platforms.

Hensel Phelps, along with its subcontractors, and Kennedy’s Institutional Services Contract, Engineering Services Contract and safety personnel are supporting crane operations, installation and initial inspection of each of the platforms.