For decades, scientists have been able to burn fuels in a flame without creating any soot, and they think they know why. They’ve crunched the numbers and run experiments in high-tech facilities, but there’s only one way to be certain about the fundamental relationship between flames and soot: They have to light a fire in space.

To that end, astronaut Christina Koch—currently aboard the International Space Station (ISS) and expected to set a record for longest spaceflight by a woman—has begun working on experiments to ignite a flame, then observe and study its properties. If the experiments show what Earthbound researchers expect they will, this could lead to a new, fundamental understanding of the properties of combustion.

“We’ll measure soot, evaluate the strength of the flame, the radiation that comes off of the flame and the gas composition and temperatures, so that we can ensure our predictions are correct,” said Richard Axelbaum, the Stifel & Quinette Jens Professor of Environmental Engineering Science in the McKelvey School of Engineering at Washington University in St. Louis. For this project, he’ll have assistance from Peter Sunderland, a professor at the University of Maryland.

Axelbaum is also the director of the Consortium for Clean Coal Utilization, and there’s one thing soot is not: clean.

“Soot, number one, is a pollutant. It can also be carcinogenic, so we don’t want to be breathing in a lot of soot,” Axelbaum said. “And it can absorb sunlight and heat the planet.” It is, in fact, the second-greatest contributor to atmospheric warming, next to carbon dioxide.

With sufficient oxygen, combustion releases the maximum amount of energy available from the fuel being burned—it burns efficiently—and the byproducts are only carbon dioxide and water. Soot, which is a byproduct of incomplete combustion, occurs when oxygen is not available for combustion. For example, in a candle flame, the soft yellow glow is from soot particles—produced in the interior of the flame —being heated to high temperatures

To many people, combustion is most familiar as fire, be it a candle or a campfire. The fuel is reacted in an atmosphere that is composed mainly of nitrogen—the air we breathe is about 78 percent nitrogen, 21 percent oxygen and small amounts of various other gases. And the familiar yellow glow is an indication that soot is being formed in these flames.

“But if I take the nitrogen out of the air and put it in the fuel, you still have the same nitrogen-oxygen-fuel mix,” Axelbaum said, “but it dramatically changes the flame structure.” The same ingredients in the same proportions, but mixed differently, completely suppress the formation of soot during combustion.

“We call this flame design because you are using the same ingredients but, with good design, are yielding conditions that intrinsically can never produce soot. 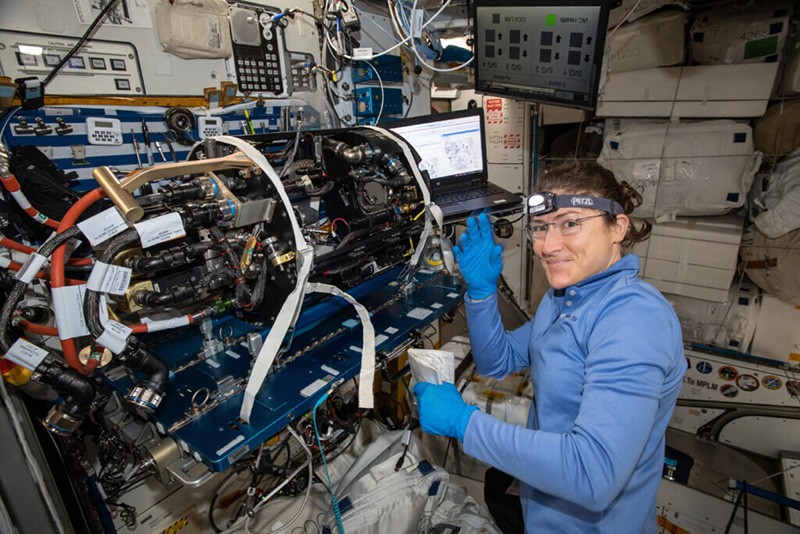 Astronaut Christina Koch will be conducting the soot experiments on the International Space Station. Koch is set to break an astronomical record: She will soon hold the record for the longest spaceflight by a woman. Credit: NASA

“At the same time, the flame is stronger, making it more resistant to being extinguished locally, which would lead to incomplete combustion and pollution,” Axelbaum said. “So those are two very good outcomes of flame design.”

So why light a fire in space?

For as long as humans have been lighting fires, there are still unanswered questions about the nature of combustion. For one, there are competing theories as to why this approach to combustion yields flames that cannot produce soot.

“It’s a fundamental question,” Axelbaum said, “and there are two competing theories to interpret our results.” One theory is that the answer is related to the flow field, specifically the flow of the gases in the flame. The other theory, posited by Axelbaum, is that the soot suppression is related to an intrinsic property of the flame structure, and not related to fluid flow. If so, this can have important implications as to how we suppress soot in combustion processes.

“On Earth, if you have a flame, say a candle, the flame shape always goes up,” Axelbaum said. “That’s because the hot gases in the flame are not as dense as the surrounding gases, and so they rise, like a hot air balloon. Thus, we cannot systematically control this flow on Earth.”

In a microgravity environment—one where gravity’s effects are significantly weaker than on Earth—a flame doesn’t flow up. In fact, the flames in Axelbaum’s experiment on the ISS form spheres.

If soot-free combustion is a function of the flow field, then in microgravity, the same mixture of oxygen and nitrogen-infused fuel will create soot. But if the suppression of soot is related to properties inherent in the flame structure, researchers should see the same thing in space—no soot.

Researchers will also be able to measure how long the flame lasts, which indicates how strong it is. Again, they expect it to be stronger than a flame that burns with a mix of nitrogen and oxygen (air) because of the structure of the flame.

“We’re going to space to do fundamental research, to gain a deeper understanding of combustion science,” Axelbaum said.

“We go to space to obtain a controlled environment that’s different from what you have down here,” he said. “The knowledge we gain can be translated to what’s happening on Earth, to yield more environmentally-friendly combustion.”