In modular assembly and transfer systems, such as those used in the automotive industry and machine building applications, these accumulation and plate chains perform a variety of demanding transport tasks.

The BS 11 modular transfer system is mainly used for manufacturing and assembling components for transmissions, engines or chassis, but it is also suitable for transporting and assembling coffee machines, high-pressure cleaners or power tools and the like. The transfer system is flexible, consisting of standard MTS components to which other components can be added as required by the customer, including stoppers, positioning devices, turning stations, and so on. The system is suitable for belt segment loads up to 1500 N/m.

Add-on components can be attached to the system, or relocated simply by loosening the fastening bolts and moving the components.

It is compatible with systems made by other manufacturers, but it also features a number of ingenious details all its own: For example, when several conveyer segments are connected to form longer conveyor systems, the maintenance segments that were previously essential with conventional systems can be omitted entirely, because when a return or drive unit has to be replaced, the modules concerned can simply be removed to one side with very little space requirement.

In order to transport the work piece carriers in this transfer system, a 1⁄2 in. accumulation chain is used. The hardened steel accumulation rollers on the chains ensure a long service life and sintered rollers reduce friction, keeping the surface clean and dry. Optional chain and product guards cover the chains completely from above, so the system can also be implemented in applications where there is a presence of dirt or chippings. The chains are lubricated with an appropriate initial lubricant to ensure continual smooth operation and fulfil energy efficiency requirements by reducing friction in all areas. The systems can be configured in lengths up to 30% longer and still provide the same driving power. As a result, and unlike conventional accumulation chains, the motor output can be reduced for similar conveyor applications. 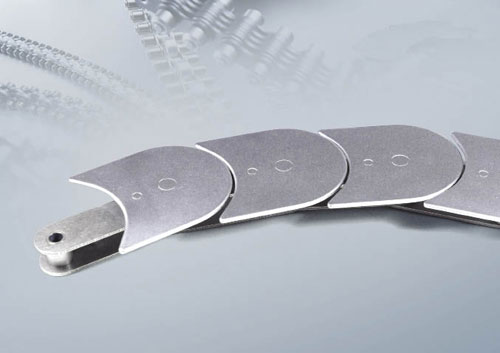 These plate chains are noted for their durability and resistance to swarf and dirt.

Another modular transfer system in which chains from iwis are used is the Schnaithmann BS 86 pallet conveyor. These systems are most often used in the machining area, to transport components and billets to and from machine tools, and even into the machining area of the spindle. They are suitable for loads up to 800 N/m and a heavy-duty version can also be supplied upon request. This system too is a flexible conveyor system, also of modular construction and consisting of standard MTS components to which components such as stoppers or lift indexing elements can be added if required. The special drip brackets with drip lip used in conjunction with the V2A drip trays in the area of the belt connectors ensure that all fluids such as oil and emulsion as well as dirt and chippings can be collected and taken away.

The transport medium for the BS 86 belt system is a type LR 4810 hardened plate chain. The plate surface layer undergoes an additional heat treatment step to give exceptional hardness, thus increasing strength and abrasion resistance. The flatness of the plates ensures smooth, quiet running and provides a flat bearing surface for components and work piece carriers. The surface is completely closed, thereby excluding any risk of injury. An initial lubrication appropriate for the application is applied to these chains too. A special geometric design enables tight angular radii, so multi-lane applications will have very narrow dividers, minimizing dead areas. The systems are capable of handling products weighing up to 150 kg per unit.