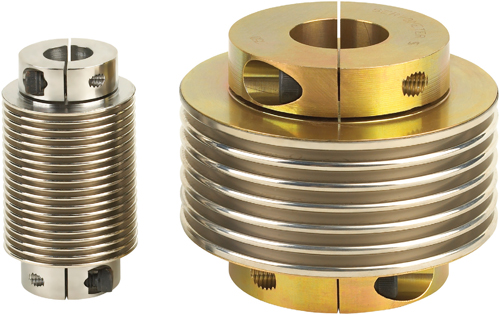 Satellites of the Global Positioning System use multiple electrodeposited nickel bellows to tune microwave antennas that cannot be repaired in orbit.

Design engineers with precision rotary motion requirements have a range of flexible couplings from which to choose. For instrumentation and fractional horsepower applications, electrodeposited nickel bellows are a premium but often overlooked solution for applications with positive displacement, zero windup, and low or minimal backlash.

Precision positioning applications, such as the semiconductor wafer cutter, need tight mechanical systems so that input and output shafts always start and stop together. Rigid couplings provide high torque capacity and stiffness without windup or backlash – a lag in output motion as the input starts and stops. But they are not very forgiving of misalignment. With angular or parallel misalignment, or with axial compression or extension, rigid couplings and their associated shafts and bearings have a record of premature failure.

Bellows-type couplings tolerate deliberate motion or assembly misalignment. They remain torsionally rigid, yet axially, laterally and angularly flexible. The design, material, and fabrication process of electrodeposited nickel bellows couplings provides flexibility and torsional rigidity. Their convoluted bellows form transmits rotation without windup as they bend, compress, and extend. Actual performance is determined by bellows wall thickness, inside diameter, outside diameter, length, and the number of convolutions. 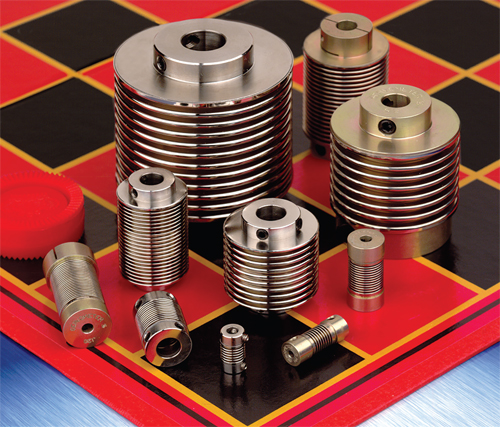 The electrodepositing process builds nickel bellows of precise thickness and diameter on a custom-machined aluminum mandrel. Subsequently, dissolving the mandrel leaves a convoluted tube as small as 0.89 mm in diameter with walls down to just 0.008 mm thick and weighing very little. The sharp radii of the electrodeposited bellows segments can also be made just three times the wall thickness, far smaller than radii produced by mechanical forming. Thinner walls with less mass reduce coupling inertia and power losses when drives start and stop. Sharper convolutions and more ductile metal also make electrodeposited nickel bellows more flexible to minimize side forces between misaligned shafts. Low side forces protect bearings and other components from wear.

Bonded to aluminum hubs or soft-soldered to stainless steel hubs, an electrodeposited nickel bellows coupling exhibits about one quarter the windup of hydroformed bronze or stainless steel bellows. Elastic windup is typically less than 1 arc-second per N-cm.

Electrodeposited bellows couplings can accommodate up to 31° angular or 1.93 mm parallel misalignment, depending on the design. The highly flexible bellows element typically limits side thrust to just 9 grams per 0.025 mm offset. It can also serve to isolate vibration or simplify assembly. One test instrument manufacturer realized significant production savings by connecting a servomotor to a tachometer with a bellows coupling rather than a rigid coupling. The flexible coupling eliminated the need for costly laser-alignment, instead permitting assembly with only coarse alignment. In overall design and assembly costs, the more expensive electrodeposited bellows paid for themselves in assembly savings and enhanced the long-term accuracy of the system.

The dynamic properties of electrodeposited nickel bellows can provide an essentially infinite life of 1×108 cycles. This can be vital in applications with limited or non-existent service access. Designers of the Abrams tank sighting system chose a bellows coupling specifically because of its long-term reliability and zero maintenance. A failed coupling would be difficult to replace inside the sealed sensor assembly.

The seamless, non-porous electrodeposited bellows will not allow dust, dirt, or moisture to contaminate precision drives. Designers of the semiconductor wafer cutter, for example, used an electrodeposited nickel bellows coupling to connect two rotating components yet isolate them from process gases. Metal bellows have greater chemical and temperature resistance than elastomeric elements. With soldered hubs, electrodeposited bellows couplings can be used at continuous temperatures to 126°C (260°F). Nickel bellows are also more corrosion resistant than brass or bronze couplings and stand up to sterilizing chemicals in applications such as the surgical microscope.

Accurate torque estimates are essential for reliable coupling operation. For a low inertia motor with a gear reduction drive, multiply the starting torque of the motor by the gear speed reduction ratio. When a bellows coupling will operate compressed, use 75% of the rated torque as the maximum value. When the coupling is used extended, you can apply the normal torque rating.