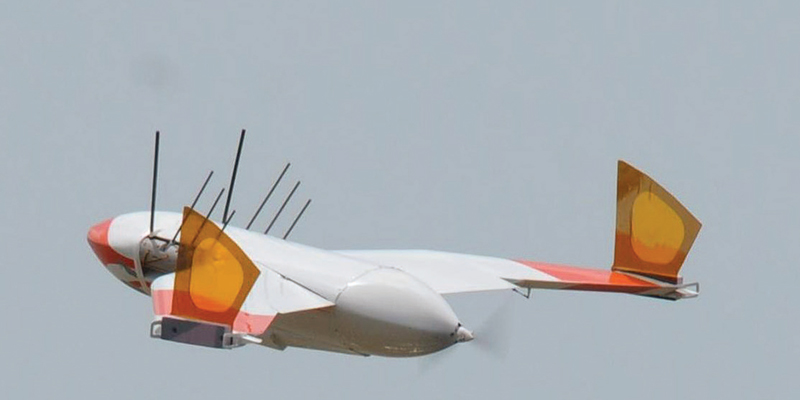 Nature has long been an inspiration for designers and engineers. So when researchers at the U.S. Naval Research Laboratory (NRL) were experimenting with flapping propulsion mechanisms for autonomous underwater vehicles, they naturally turned to fish for inspiration.

Specifically, the team had been developing the Wrasseinspired Agile Near-shore Deformable-fin Automaton, or WANDA, a portable AUV with robotic fins. However, the design was not conducive to long distance travel, because while flapping is a highly maneuverable method of traveling underwater, it’s not particularly efficient for traveling at fast speeds. Thus, the team turned to another biological muse, the bird.

The resulting vehicle design is capable of flying and swimming, and is aptly named Flimmer. “You can look at any number of birds – there are a lot of biologic flyers that also swim – they all seem to solve the splash down and the underwater part differently,” explains Dan Edwards, Aerospace Engineers, Vehicle Research Section, NRL. In fact, flying fish and even squid get out of the water using unique traits.

“I don’t know of anyone who has thought through combining underwater flapping propulsers into a flying vehicle,” adds Edwards, although he admits that nature has solved this problem in ways that designers and engineers have yet to answer.

Today, the design features four servo actuators that control four fins on the vehicle’s 3D-printed plastic housing, which can rotate independently. The combination of these maneuvers is what controls the vehicle under water, but making it fly is the tricky part, according to Edwards.

Flimmer has several takeoff options, including an air launch from a larger plane. During testing, the NRL team launched it off of the ground from a pneumatic launcher, which Edwards describes as “a giant glorified potato cannon” set up specifically for launching vehicles.

“Once airborne, Flimmer has a small electric motor in the back that acts as a pusher,” he adds. The motor is powered by on-board batteries which provide enough energy to hold altitude and climb.

In order to be flight capable, the team had to find a balance between an underwater vessel, in which weight is not normally a concern, and an airplane, in which weight is extremely critical. “It’s crazy how much effort aircraft spend to reduce the smallest mass fractions,” explains Edwards.

As such, the team had to make a lightweight vehicle that would still be capable of surviving a tough splashdown. While the trade between weight and function can be solved with math, according to Edwards. “The tricky part is how you get it into the water.”

As the vehicle flies over water it’s traveling at a high speed in a low density medium. To transition underwater, the vehicle must slow down and enter a much thicker medium. “It’s that transition between [air and water] during which you have to not destroy everything,” says Edwards.

To keep the Flimmer intact, the team experimented with various landing styles using a test vehicle called the Test Sub 2. Many configurations were tested, including plunge landings (like a duck diving straight down into the water) versus pelican landings, in which the bird spreads its wings to slow down, puts its feet down, and skids across the water to slowly set down.

“The only way to land is flat,” says Edwards. Accordingly, the Flimmer lands more like the pelican – slowing down until the moment it touches the water. It also features a traditional boat hull, so it can touch down and slowly scrub off extra energy.

Parachutes, or spins into the water were options as well, but the team wanted one solid vehicle with no frangible parts. “Structural analysis was really important,” explains Edwards. “You don’t want to over-build because it carries more weight in the flying mode, but you can’t under-build because you still have to splash down and puncture the hole in the water.”

The process included much trial and error, but the team also used computational fluid dynamics (CFD), and a non-linear solver developed by NRL. “[The solver] breaks up fluid into really small solids and computes, for each very small point, what the forces and moments are on that particle and then sums up the whole mesh to get a number,” explains Edwards.

The Flimmer is launched from the ground via a pneumatic launcher. (All image credit: U.S. Naval Research Laboratory)

The team also used finite element analysis (FEA) for structural modeling and completed linear aerodynamics for the general airplane shape. “A little bit of intuition” was also key, says Edwards, who explains that sitting around the table with napkins sketches and kicking around ideas was surprisingly important.

“[Brainstorming] really sets the stage for determining the general shape,” he adds, but stresses the importance of the experimental process. “We broke some stuff in the water, which gave the team insight into what to do different the next time, but that’s kind of the fun part.”

The program is currently wrapping up as funding comes to an end, but the technologies developed as part of the Flimmer program will continue to be refined. “I think we’ve ended at a good point,” says Edwards. “We’ve shown that the vehicle can fly in its full-weight, full-finned configuration.”

Specifically, the team at NRL will continue working on increasing the efficiency of the vehicle’s flapping mechanisms. “It is hard to beat a spinning propeller,” says Edwards.

Although unlike a spinning propeller, the flapping propeller makes very high thrust levels almost instantaneously. “In one stroke we can make full thrust,” he adds.

“Regardless of what you do in water, flying is a really interesting way to get you right where you need to be,” says Edwards, who uses the example of the oil spill in the gulf. “No one knew where the oil was coming from or going to,” says Edwards. “Flimmer could have been deployed from the shoreline to fly around and survey for oil slicks.” Once identified, it could have splashed down to swim underwater and try to identify from where oil was spilling.

This is one potential use of the technology, although Flimmer, in its current form, may not be representative of how the research will be used in a final product. However, the underlying technology will enable similar missions that weren’t possible without multiple mode vehicles.

“It seems like there is probably something still hiding … some really good trade between the two,” says Edwards. While Flimmer is the first example of a multimodal drone for use in the sky and at sea, Edwards admits that the design can still be improved upon. “One day we’ll look at the design as all of these ideas come together and people think about the problem in a different way and go ‘ah, ha – now we can do flying and swimming in the same vehicle,’” he adds. “It will be interesting to see what that is in the future.”

This article originally appeared in the November/December 2015 print edition of PD&D.