Boeing’s F/A-18 Hornet and Super Hornet fighter jets have something for everybody. Built to take off from and land on aircraft carriers, the planes come in handy for escorting ships through hostile waters or defending a fleet against air attacks. They can also provide close air support for troops on the ground. Depending on the type of mission, they can be equipped with a wide variety of weapons.

With its twin F404 engines, the Hornet became the backbone of the U.S. Navy’s fleet of fighter planes through the 1980s and 1990s. “If you looked out on the flight deck of an aircraft carrier during those years, you’d see mainly Hornets,” says Tom Lodge, head of marketing for GE Aviation’s military engines business. “I would say the Hornet is more of a Corvette than a pickup truck,” he adds. “It’s high-end, but not expensive. It’s not a Lamborghini. It’s a common airplane.”

Versatility and low cost were key words here. The F404 is a medium-size engine —11,000 pounds of thrust, 17,000 with afterburner. But it’s also relatively light, which makes it suitable for agile fighters, and designed to be easily maintained. Its six modules — fan, compressor, combustor, high-pressure turbine, low-pressure turbine and afterburner — were made to fit together like Legos. This design is convenient especially on an aircraft carrier, allowing engineers to quickly swap out a module for a spare. “You could pull the engine apart, mix and match, and get flying right away,” says Lodge.

This modular approach has won plaudits. The journalist and author Orr Kelly wrote in his book “Hornet: The Inside Story of the F/A-18” that GE “was, on its own, one of the first to recognize the value of worrying, early in the design phase, about the cost of building and maintaining an engine. Although this seems a commonsense approach, it runs contrary to the natural inclinations of most engineers.”

This engineering style may have something to do with the F404’s long life. Last week the U.S. Air Force announced an agreement with Boeing to purchase more than 350 T-X trainer jets, all of them powered by the F404 engine. “We’re very excited about supporting Boeing and the U.S. Air Force with our F404 engines and helping train fighter pilots for generations to come,” says Al DiLibero, vice president and general manager GE Aviation’s turbofan and turbojets projects based in Lynn, Massachusetts. 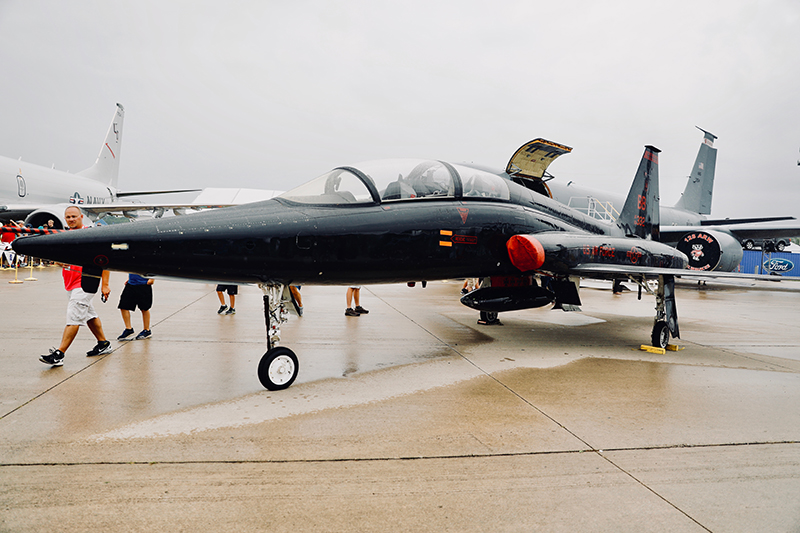 The deal represents something of a generational change for GE. The F404s will replace another GE engine, the J85, which was used on the previous generation of T-X trainers. Designed in the late 1950s, the J85 was the first small turbojet to operate with an afterburner, and was also the first GE engine with a variable-exhaust nozzle. In the early 1960s, a commercial variant of the engine powered the first Learjets, a family of pioneering private jets for business executives.

Production of J85s ended in 1988, but the Boeing contract now passes the torch to the F404: The deal could extend the life of the F404 for another decade.

The F404 engine and its cousin, the F414, power a wide variety of jets in the U.S. and around the world, including the F-117 Nighthawk, Sweden’s Saab Gripen, India’s Tejas, and of course, the Super Hornet.

“This is all about joint warfighting excellence,” said Air Force Chief of Staff Gen. David L. Goldfein. “We need the T-X to optimize training for pilots heading into our growing fleet of fifth-generation aircraft.”