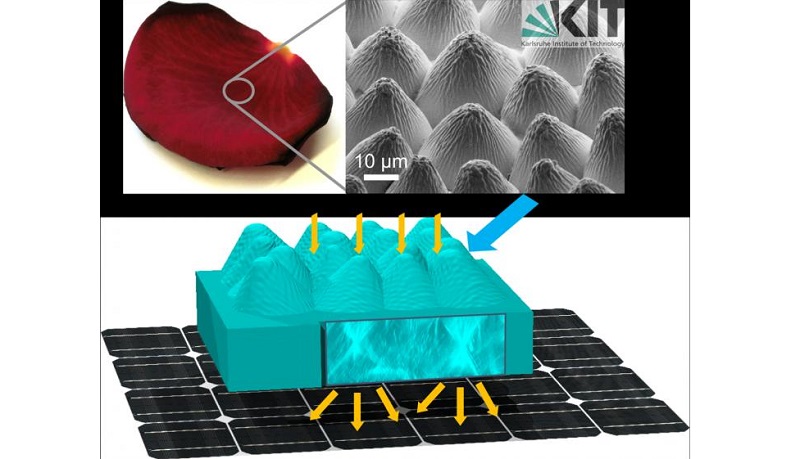 Biomimetics: the epidermis of a rose petal is replicated in a transparent layer which is then integrated into the front of a solar cell. Image credit: Guillaume Gomard, KIT

With a surface resembling that of plants, solar cells improve light-harvesting and thus generate more power. Scientists of KIT (Karlsruhe Institute of Technology) reproduced the epidermal cells of rose petals that have particularly good antireflection properties and integrated the transparent replicas into an organic solar cell. This resulted in a relative efficiency gain of twelve percent. An article on this subject has been published recently in the Advanced Optical Materials journal (DOI: 10.1002/adom.201600046).

Photovoltaics works in a similar way as the photosynthesis of plants. Light energy is absorbed and converted into a different form of energy. In this process, it is important to use a possibly large portion of the sun’s light spectrum and to trap the light from various incidence angles as the angle changes with the sun’s position. Plants have this capability as a result of a long evolution process – reason enough for photovoltaics researchers to look closely at nature when developing solar cells with a broad absorption spectrum and a high incidence angle tolerance.

Scientists at the KIT and the ZSW (Center for Solar Energy and Hydrogen Research Baden-Württemberg) now suggest in their article published in the Advanced Optical Materials journal to replicate the outermost tissue of the petals of higher plants, the so-called epidermis, in a transparent layer and integrate that layer into the front of solar cells in order to increase their efficiency.

First, the researchers at the Light Technology Institute (LTI), the Institute of Microstructure Technology (IMT), the Institute of Applied Physics (APH), and the Zoological Institute (ZOO) of KIT as well as their colleagues from the ZSW investigated the optical properties, and above all, the antireflection effect of the epidermal cells of different plant species. These properties are particularly pronounced in rose petals where they provide stronger color contrasts and thus increase the chance of pollination. As the scientists found out under the electron microscope, the epidermis of rose petals consists of a disorganized arrangement of densely packed microstructures, with additional ribs formed by randomly positioned nanostructures.

In order to exactly replicate the structure of these epidermal cells over a larger area, the scientists transferred it to a mold made of polydimethylsiloxane, a silicon-based polymer, pressed the resulting negative structure into optical glue which was finally left to cure under UV light. “This easy and cost-effective method creates microstructures of a depth and density that are hardly achievable with artificial techniques,” says Dr. Guillaume Gomard, Group Leader “Nanopothonics” at KIT’s LTI.

The scientists then integrated the transparent replica of the rose petal epidermis into an organic solar cell. This resulted in power conversion efficiency gains of twelve percent for vertically incident light. At very shallow incidence angles, the efficiency gain was even higher. The scientists attribute this gain primarily to the excellent omnidirectional antireflection properties of the replicated epidermis that is able to reduce surface reflection to a value below five percent, even for a light incidence angle of nearly 80 degrees. In addition, as examinations using a confocal laser microscope showed, every single replicated epidermal cell works as a microlense. The microlense effect extends the optical path within the solar cell, enhances the light-matter-interaction, and increases the probability that the photons will be absorbed.

“Our method is applicable to both other plant species and other PV technologies,” Guillaume Gomard explains. “Since the surfaces of plants have multifunctional properties, it might be possible in the future to apply multiple of these properties in a single step.” The results of this research lead to another basic question: What is the role of disorganization in complex photonic structures? Further studies are now examining this issue with the perspective that the next generation of solar cells might benefit from their results.