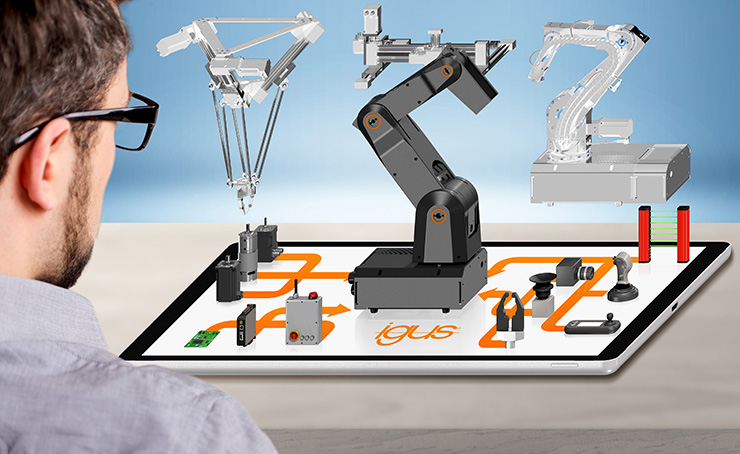 On a recent trip to igus’ Cologne, Germany headquarters, I had the opportunity to sit down with Stefan Niermann, head of the newly created Low Cost Automation business unit. igus has moved more and more into the so-called “rohbot” market (think raw-bot), a down-to-basics articulated robot arm model that takes advantage of the company’s decades of experience in plastics.

Although the concept was launched several years ago, Niermann said that the company has since realized that many customers want more than the bare bones.

“What we know from customers is that they are looking for complete solutions. They want their problem solved,” he said. “They say, ‘I have to take these chocolates, coming from a conveyor belt, and I have to put them in a box. Simple. Can you do it?’ I would tell them, yes — they can use a Delta robot, or if speed isn’t critical, they can use our articulated arm.”

Customers were delighted by the price of 2,000 to 4,000 Euros (especially compared to the cost of a Delta robot). But then they’d say, “I’d like to buy it, but can I get the gripper too?”

“No, we don’t have the gripper,” was the unfortunate response, Niermann said. “Even if you have the gripper you also need the camera, because it has to see where the chocolate is. You also need all the sensors and the other componentry that makes it truly function as a robot.”

Thus, igus decided to partner with other component manufacturers to flesh out the robot more. At next month’s Hannover Fair (the largest worldwide industrial trade show) the company, together with several partners, will present these solutions. The company will have different stations with robots working together — for example with control from Beckhoff or grippers from Schunk or a camera system from EFM.

“Customers will be able to see what’s possible, using a low-cost robotic solution, with the right partner products, or complimentary products,” said Niermann.

At the Fair, the company will be releasing the second generation of the robot arm, as well.

“This one is much more focused on industry solutions,” he said. “So, we have more stiffness in the arm, we can accept more payload because as the arm gets lighter, we can go a little bit faster. And together with our partners, we can really do precise positioning.”

Neirmann said they also put the cables inside of the robotic arm and use plastic covers — it’s almost like an energy chain, and this makes assembly a little bit easier, too. The new generation also includes much better joints inside; the gear technology is still the same, but “it’s also getting better.”

The systems feature a modular kit principle, and the components are lubrication-free. The compact and lightweight articulated arms are light, maintenance-free, and durable. As a result, small, configurable quantities can be created, as well as large numbers for major manufacturers.

If you visit this year’s Hannover Fair, make sure to stop by the large igus booth, located in Hall 17, to check out these updated robotic arms.