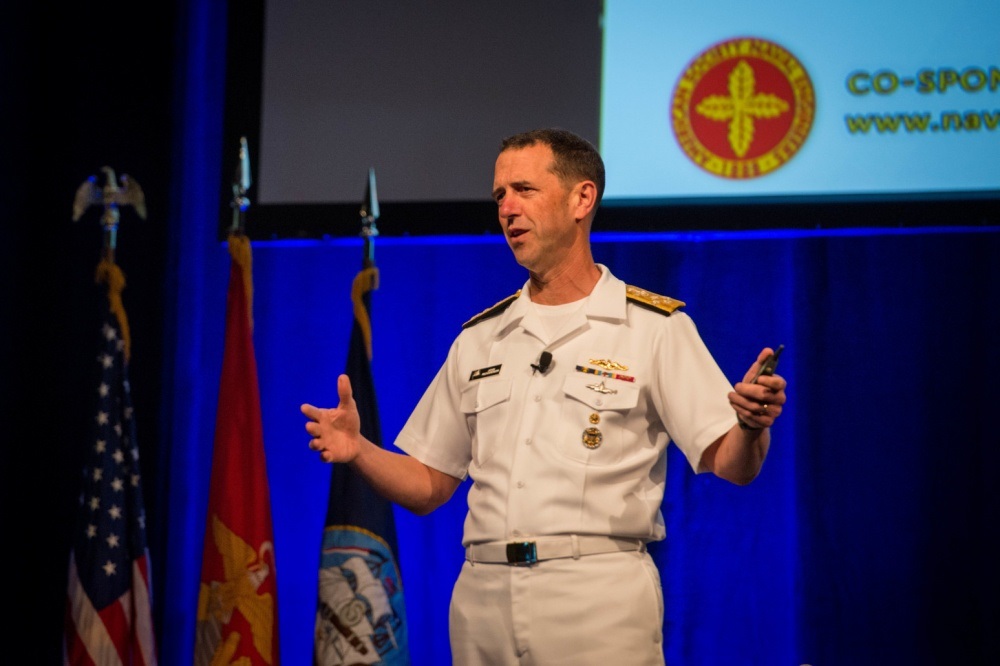 As the second day of the Naval Future Force Science and Technology Expo began, July 21, thousands of attendees once again flooded the hall, listening to their first speaker from their seats.

On the stage, Chief of Naval Operations Adm. John M. Richardson gave the opening remarks on the future of the Navy.

“In many areas of our business, sea control and blue water areas of warfighting have been uncontested for about 20 years. There have not been challenges on the high seas for a while. That’s changing,” said Richardson. “We have, from my perspective, without a doubt returned to an era of maritime competition.”

The expo, sponsored by the Office of Naval Research, is held every two years. Always drawing a crowd, the attendees come to hear from technical experts and senior naval leaders like Richardson, speak on their strategic visions for the future of the Navy, for the next generation and the generation after the next.

“There are questions the Navy must ask as it moves into the future,” Richardson said. “What sort of Navy is needed to defend itself and protect itself around the world? How do we get this level of performance, but quicker, in the 2020s? How big should the Navy be?”

Pointing to studies that all showed the Navy today needs approximately 350 ships to do all this, Richardson raised another question. How do we meet this gap in numbers?

“The players are changing,” Richardson said. “And the character of the game is changing. Our current competition is moving faster, exponentially. As a person who’s not consumed with the generation after the next, I’m more concerned with the next generation.”

Participants at the expo heard about moving forward from other speakers like Chief of Naval Research Rear Adm. David Hahn, who has a similar vision for the Navy, as well as Lt. Gen. Robert Walsh, commanding officer, Marine Corps Combat Development Command; representatives of Congress; and others from the DoD and federal government.

Each day, follow-on panels discussed career success and advancement opportunities for women in the field of science, and a new initiative for accessing the state of the ocean: Task Force Ocean.

In addition, showcased were some of the Navy and Marine Corps’ latest technologies, including the electromagnetic railgun; the Naviator, an unmanned aerial-aquatic vehicle; a fuel-efficient medium-tactical vehicle replacement technology demonstrator; and Draco robotic leg prototype.