University of Michigan researchers have refined a gas-sniffing device so that it can detect poisonous gases and explosives in less than half a second.

The laser-based method could be used as a security device in airports or to monitoring for pollutants or toxins in the environment. The physicists’ findings build upon a method they developed last year that detects gases in about four or five minutes. The current device uses three lasers to shorten the detection time significantly. Their updated research is published in Nature Photonics.

“This is critical for making the device practical. If you’re monitoring the environment, you need to do it reasonably quickly because of fluctuations in the environment. You don’t want to wait five minutes to figure out if something has a toxin in it.”

Gases have certain wavelengths that can be read using lasers. Cundiff and physics research fellow Bachana Lomsadze’s first device used a method called “multidimensional coherent spectroscopy,” or MDCS. MDCS uses ultrashort laser pulses to read these wavelengths like barcodes. A gas’s particular wavelength identifies the type of gas it is.

Many gases have a very rich spectra for certain wavelengths, or colors, of light—although the “colors” may actually be in the infrared, so not visible the human eye. These spectra make them easily identifiable. But this becomes difficult when scientists try to identify gases in a mixture. In the past, scientists relied on checking their measurements against a catalogue of molecules, a process that requires high-performance computers and a significant amount of time.

Cundiff’s previous method used MDCS with another method called dual-comb spectroscopy to shorten detection time to that four or five minutes. Frequency combs are laser sources that generate spectra consisting of equally spaced sharp lines. These lines are used as rules to measure the spectral features of atoms and molecules, identifying them with extreme precision. In dual-comb spectroscopy, the lasers send pulses of light in different patterns in order to quickly scan for the fingerprints of gases.

Now, Cundiff and Lomsadze have added another layer of laser detection to pare down that detection time even further, using a method that they have dubbed “tri-comb spectroscopy.” This is also the first time tri comb spectroscopy has been demonstrated, Cundiff says.

Here’s how the device works: Two lasers send light pulses in the same direction which combine into a single beam. This beam passes through a gas vapor, and after the beam passes through the vapor, it is combined with the beam from a third laser. Then, the final beam hits a signal detector that measures the spectra of the gas mixture and identifying the gases. While this demonstration used “home-built” lasers that are not particularly compact or robust, equivalent commercially available lasers measure about 10 inches by four inches by two inches.

Similar to their work last year, Lomsadze and Cundiff tested their method in a vapor of rubidium atoms that contained two rubidium isotopes. The frequency difference between absorption lines for the two isotopes is too small to be observed using traditional approaches to MDCS, but by using combs, Lomsadze and Cundiff were able to resolve these lines and assign the spectra of the isotopes based on how the energy levels were coupled to each other. Their method is general and can be used to identify chemicals in a mixture without previously knowing the makeup of the mixture.

Cundiff hopes to implement the device in existing fiber optic technology, and controlling the laser pulses with software. That way, the software can be adapted to particular environments. 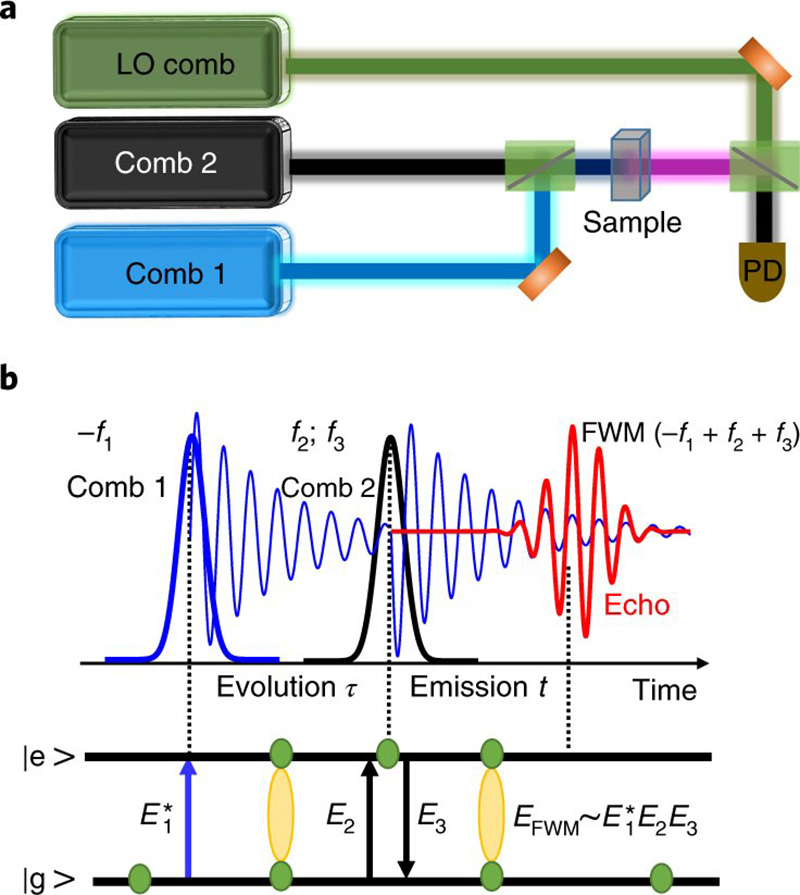 a, Experimental set-up for TCS. PD, photodetector. b, The generation of a FWM signal. The first pulse from comb 1 (blue), which is a complex phase-conjugated pulse (E1*), creates a coherence between the ground state and an excited state (evolution for a single resonance is shown in light blue); the second pulse from comb 2 (black) converts this coherence into a population of the excited state and then converts this population into a third-order coherence that radiates a FWM signal, which for an inhomogeneously broadened system is a photon echo (red). The FWM signal is then heterodyned with the local oscillator comb. Credit: Nature Photonics