There are few places in the world like NASA’s rocket factory in New Orleans, where the U.S. space agency and its contractors are building the Space Launch System. It’s the most powerful rocket ever designed — and may one day take astronauts as far as Mars. Known as the Michoud Assembly Facility, the plant covers an area equal to 31 American football fields, including several soaring high-bay areas where workers stack silver and orange rocket segments like Jenga blocks.

The GE unit opened its Technology Center for the Americas, or TCA, in a cavernous concrete-and-steel hangar onsite. Workers will use it to design and test wind turbine blades that are longer, stronger, lighter and more affordable — all key factors in keeping wind power competitive with other sources of energy. “TCA boasts some of the most advanced composites manufacturing space in the industry,” says James Martin, director of the technology center. “We can handle some of the largest structures on the planet, we’ve got access to a deep water port, and we have relationships with local universities. New Orleans is going through a technology renaissance moment, and it’s attracting a lot of talent.”

Taking wind blades to the next level is no small task. LM Wind Power already makes blades that are 88 meters long and weigh more than 30 tons. The company is now getting ready to manufacture units that stretch 107 meters, longer than a football field, for GE’s Haliade-X 12-megawatt offshore wind turbine, the largest such machine in the world. Some of the components tested here will include parts for blades possibly longer then the Space Launch System itself, which, in its most powerful configuration, will top out at 384 feet, or 117 meters. 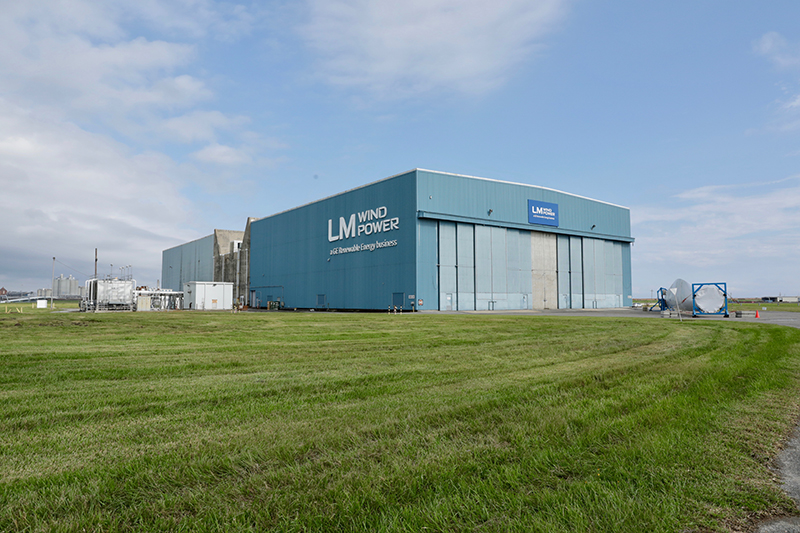 Top and above: LM Wind Power opened its Technology Center for the Americas, or TCA, in a cavernous concrete-and-steel hangar at NASA’s Michoud Assembly Facility in New Orleans. Workers will use it to design and test wind turbine blades that are longer, stronger, lighter and more affordable — all key factors in keeping wind power competitive with other sources of energy. Images credit: Tomas Kellner for GE Reports.

NASA has been making rockets at Michoud since the Apollo program, and workers here have assembled fuel tanks for dozens of space shuttle missions. LM Wind Power is looking to tap those skills and augment its blade-building know-how. “We have a fully functional NASA lab that we partner with,” says Mitchel Graff, production manager at the center. “We also have in-house testing capabilities that we’ve designed to force failures quickly. We can take the results of those tests, go directly to the shop, and turn those learnings into new manufacturing processes and new designs.”

“Forced failure” is a nice way to describe what is essentially a torture regimen for wind blades. The team here tries to break them in various ways, pry them apart, and expose them to a multitude of other hardships in order to make them longer and, at the same time, also lighter.

This is tricky but necessary work. Length and weight often work against each other, but larger rotors allow operators to catch more wind and lower the “levelized cost of energy,” an important ratio that allows investors and operators to compare the cost of electricity generated by different technologies and energy projects.

The rotor is a good place to start chipping away at the ratio — the amount of money it takes to build and run a power plant divided by how much energy it generates — and reduce the cost of wind power. Consider that a set of blades accounts for 30 percent of a wind turbine’s price tag, says Anne McEntee, chief digital officer for GE Renewable Energy. “You have to think about all of the different wear and tear on the blades because that’s where you convert all of your wind to energy,” says McEntee, pointing out that the tips of the largest LM Wind Power blades travel at more than 200 mph. “As we think about the costs, not just from a capex standpoint, when you first purchase a turbine, but also the maintenance cost that needs to go into these as you run them for that 30 or 40 years, it’s huge.”

Make it huge in every sense of the word. “You are already getting some very large turbines, and it’s not going to stop there,” McEntee says. “As time goes on, we will continue to push the technology envelope, like what we are doing here in Louisiana. It will enable us to go taller, go longer, and to go with bigger name plates.”

Among the technologies the team will test here are jointed blades like those LM Wind Power is developing for its 5-megawatt Cypress onshore turbine platform. The turbines’ 158-meter rotor diameter is more than twice the length of a Boeing 747, and that contributes to an estimated 50 percent increase in annual energy production over GE’s 3-megawatt platform technology. The joint allows the company to ship the 77-meter-long blades in two manageable pieces, rather than one, and assemble them onsite.

The blades are made from a gumbo of various materials — carbon fiber, glass fiber, balsa wood and resin — and the New Orleans facility also will allow engineers to test new ways of bonding them together. For example, the team here can use software when designing blades to simulate specific wind conditions from where the turbine will be based and identify potential trouble spots where buckling or strain may occur. Based on the results, the team can fine-tune the thickness of the composite and add reinforcement in the right place. “That’s where really the trick comes in,” Graff says. “If you talk to the designer, he’s going to want to build the lightest blade possible that may also feature the most complex materials and shapes. If you talk to the manufacturing engineer, you know that person’s going to want to design the blade in very easy shapes with very simple materials. It’s the balancing the two that makes this place special.”

The site employs 45 people, and LM Wind Power says it will create 100 more jobs. Duncan Berry, chief executive of LM Wind Power, says the center will serve as “a local base” from which the company “will support our customers in the Americas as well as partner with world-class researchers from the U.S. Department of Energy and elsewhere in the U.S.”

Says Berry: “The NASA facility is so special for many reasons.”