When someone uses the term “driverless vehicle,” what probably comes to mind is some iteration of the driverless cars that auto manufacturers and technology companies have been testing for the past few years. But driverless vehicles have been around since the 1950s, when wire-guided vehicles, now known as “AGVs,” were first used for industrial applications.

According to the Material Handling Institute, an AGV “consists of one of more computer controlled, wheel based load carriers (normally battery powered) that run on the plant floor (or if outdoors, on a paved area) without the need for an onboard operator or driver.” Navigation can be achieved by following a path indicated by buried inductive wires, surface-mounted magnetic or optical strips, or by way of inertial or laser guidance. 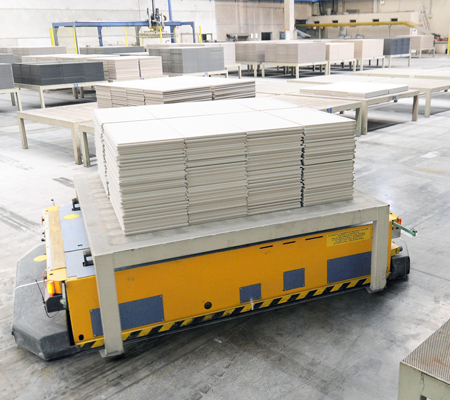 The term “AGV,” or automatic guided vehicle, didn’t come into use until the 1980s. Prior to that, these automated material handling systems were generally referred to as “driverless vehicles.”

As part of an automated storage and retrieval system (ASRS), automatic guided vehicles (AGVs) provide “hands-off” material management for pallet handling, truck and trailer loading and unloading, material movement, and of course, material storage and retrieval. Where AGVs excel are applications with repetitive delivery of fixed loads or volumes, those where on-time delivery (to a manufacturing or shipping station, for example) is critical, and those where material tracking is important.

If you look under the hood of an AGV, you will likely find one or more gearmotors, providing locomotion to the AGV itself or helping to lift and rotate the load that’s being carried.

There are several requirements that gearmotors must meet in AGV applications. First and foremost, size matters, so the gearmotor should be as compact as possible. Space for motion and control components is at a premium in an AGV, since the middle portion of the robot needs to remain unobstructed for placement of the batteries. And because AGVs are battery-powered, power consumption needs to be kept to a minimum. Monitoring and maintenance of the robot should be simple, despite the fact that it will be subjected to extremely heavy loads, vibrations and shocks, and possible adverse environmental conditions. 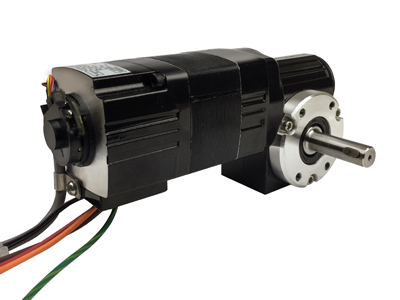 But while these requirements present challenges, as Terry Auchstetter, Business Development Manager for Bodine Electric points out, they’re not showstoppers.

Because the gearmotors drive the robot’s wheels, they have to not only support the load being moved, but also the weight of the robot itself. This means the gearmotor driveshaft has to deal with very large radial and axial loads, so Bodine modified the bearings and bearing housings to ensure the driveshaft could support these high loads. The customer also required electromagnetic fail-safe brakes on the gearmotors, which increase the length of the assembly. By using right-angle gearboxes, however, this added length didn’t interfere with the space for the batteries, as it would have with a parallel-shaft gearbox arrangement. 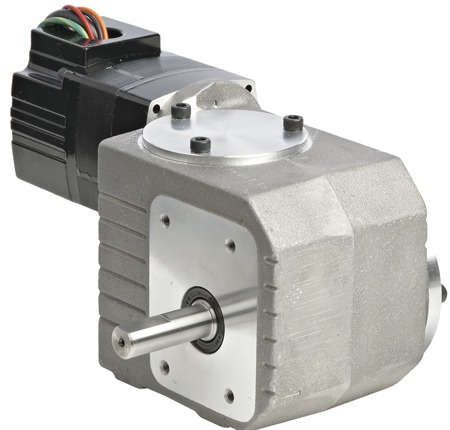 Along with size constraints, weight – which directly affects power consumption – was also at a premium. To keep power consumption in check, low-voltage dc motors were paired with high-efficiency gearboxes. And the dc motors have a higher peak torque for a given size, so a smaller frame – and therefore, lighter – motor was able to meet the peak and RMS torque requirements.

Bodine specifically chose brushless motors for the application, greatly reducing maintenance, since there was no need to monitor or replace motor brushes. Brushless motors also eliminated electromagnetic interference (EMI) issues, which are a particular concern in automated warehouses, where much of the communication is done wirelessly. Temperature sensors were integrated into the gearmotor for monitoring and to prevent overloads that could damage the motors or even the robots.

AGVs often need to meet specific design criteria and size restrictions imposed by existing warehouse, distribution, and ASRS layouts. But as Auchstetter points out, it is possible to work within these constraints when sizing and selecting a gearmotor, without requiring new product development, which can be costly and require long lead times. The key is for manufacturers to be flexible, using modified standard designs and ensuring that every design element – from the major components to the mounting interface – is optimized to meet the specifications for size, weight, and energy consumption.