Global single-axis tracker revenues are expected to grow 120%, to reach nearly $2 billion in 2019, according to IHS, a global source of critical information and insight. For the first time, single-axis trackers will be the preferred type of structural balance of system (BoS) ground mount in the Americas in 2015. Overall global ground-mount solar photovoltaic (PV) installations are forecast to increase an average of 7% per year, reaching 33 gigawatts (GW) in 2019; utility-scale installations will account for 73% of the total.

According to the IHS “PV Balance of System Equipment – 2015” report, the global market for ground-mount structural BoS will be dominated by fixed-tilt structures, which will account for 67 percent of total installations. Single-axis tracker installations are forecast to provide just over 9GW in 2019 driven mainly by the growth of utility-scale installations.

In the United States, Sunpower, First Solar and other leading engineering, procurement and construction companies (EPCs) — along with Nextracker, Clavijo and other pure-play suppliers — are currently promoting single-axis trackers in large utility-scale installations. “When single-axis trackers are installed in high irradiation locations, the additional energy yield means that customers can generate a higher return on investment,” Gilligan said.

While Chile and other emerging markets favor single-axis trackers, larger Asian markets, such as China and India, currently prefer fixed-tilt trackers, due to the abundance of large domestic steel manufacturers that can manufacture them cheaply. In India and other markets with low labor costs, suppliers like Tata International are installing seasonally adjusted trackers, which allow the angle of trackers to be changed seasonally by humans, rather than with motors. As these large Asian markets develop, IHS expects installations with single-axis trackers to increase rapidly, as existing suppliers develop new products and as new suppliers enter the market. 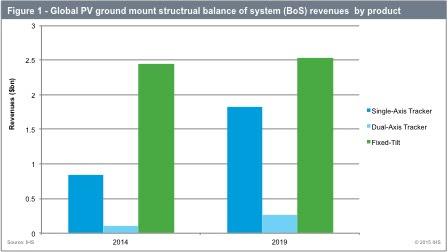 The scope of the IHS “PV Balance of System Equipment – 2015” report is segmented into electrical BoS products, such as DC cabling, combiner box, connectors, inverters and system monitoring hardware, as well as structural BoS products, such as rooftop and ground-mount structural mounting products. The report covers the total market for PV BoS equipment, which is defined as any part of a PV system’s hardware excluding the PV module. The report does not analyze components on the AC side of the inverter (e.g., AC cabling or AC combiner boxes). For more information about this report, visit here.