Among the main benefits of unmanned vehicles like drones is the ability to closely survey locations and situations considered too remote and dangerous for manned crews to explore. Such is the case with the state of Colorado, which has in recent years dealt with a devastating string of wildfires.

Since 2011, the state of Colorado has been governed by John Hickenlooper, who is approaching the end of his second and final term in office. Throughout his storied tenure, Colorado has become one of the most desirable living destinations, with some of the happiest and healthiest residents in the United States. Inevitably, Governor Hickenlooper faced many unprecedented challenges, including some of the costliest and most destructive wildfires in Colorado’s history.

Colorado saw some of its worst wildfires in the state’s history between 2011 and 2013 (Image Credit: Wikimedia Commons)

Between 2012 and 2013, six different wildfires collectively scorched over 234,000 acres, cost tens of millions in damage, and caused multiple fatalities. Despite the devastating ramifications these blazes caused, Governor Hickenlooper’s administration gained valuable insight on coordinating and implementing responses to these kinds of disasters by taking an innovative approach.

“We had the worst droughts and wildfires since the Great Depression,” Hickenlooper recalls when I spoke with him at AUVSI’s Xponential show in Denver earlier this month. “We learned how important it was to reach fires as soon as we can so our responders can set up and implement the proper protocols.”

Hickenlooper went into detail on how Colorado has significantly increased the number of vehicles and resources reserved for these particular scenarios that are on a local control basis. The multi-tiered approach involves training sheriffs and firefighters on the local level to reach incipient wildfires in real time, and fully embrace UAVs like remotely controlled drones and other vehicles.

Deploying drones provides key safety and cost benefits, according to Governor Hickenlooper, since unmanned vehicles can perform tasks and enter places without putting humans at risk.

“Dealing with fires, floods, or any kind of disaster, they create situations where you need to figure out what’s going on, but don’t want to put a human at risk when the circumstances are still tenuous. If you have UAVs in the air, it’s dramatically less expensive than deploying a fleet of conventionally used vehicles, especially if you want to keep them going nonstop,” says Governor Hickenlooper when he discussed his administration’s utilization of UAV technology. “You’ll get a lot more perspective for a lot less cost with drones than government vehicles.”

Governor Hickenlooper was very emphatic about what emergency responders are capable of achieving with unmanned technologies, and feels they can be instrumental in reaching, containing, and preventing wildfires from spiraling out of control like we’ve seen in recent years.

“As we get better with infrared for example, we’ll be able to have UAV vehicles equipped with this kind of technology go over a developing fire—day or night. We currently have imaging that lets us know every single lightning strike in the state of Colorado. We’ll soon be able to differentiate those places and strikes that have the highest probability to start a fire, and just have a drone go right over that area, where they’ll be able to sense even the faintest heat signal,” Hickenlooper notes. “Sometimes, these strikes will smolder for one or two days. If you get to an area with dry conditions where there’s smoldering before the wind picks up and extinguish the fire then, you avoid tens of millions of dollars in costs and all kinds of human risks.”

“You need to have protocols for which local fire departments and respondents don’t feel like they’re being underserved, and realize they have all these resources at their hands. We (state of Colorado) now pay every penny of a first response. This prompts local communities, which have the primary responsibility for firefighting (until the blaze reaches a certain size), to become more motivated to reach these fires sooner,” says Governor Hickenlooper when asked how the Governor’s office prepares for upcoming wildfire seasons—especially with 2018 forecasted to potentially be Colorado’s worst wildfire season in five years.

“The blazes of 2012 and 2013 showed us how important it was to train and prepare our state firefighters with local and federal firefighters—even our military. On a number of those big wildfires, we ended up reaching out to the Air Force and Fort Carson, where they do a lot of training for National Guard helicopters to both evacuate people, along with transferring and dumping water when the fires are in their early stages,” Hickenlooper adds. “It’s important to know we’re all partners in these situations. To be forewarned is to be forearmed.” 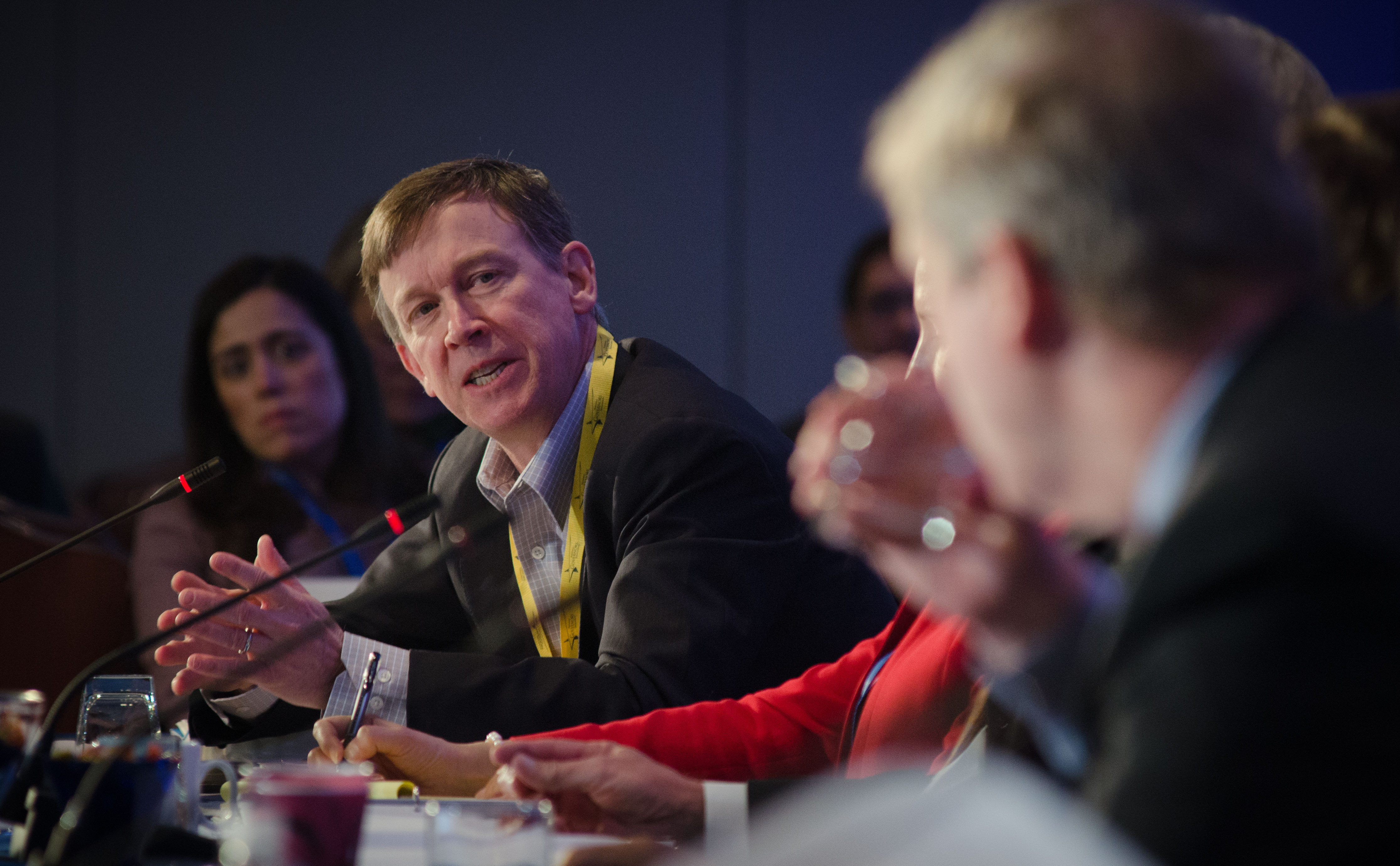 With his time in office concluding, Governor Hickenlooper is optimistic that his successor will continue utilizing these technologies to combat wildfires and other disastrous scenarios. Hickenlooper set a precedent last June by signing House Bill 17-1070, which established a pilot program for determining the best practices on how to use an aircraft system in public safety activities like firefighting, search and rescue, accident reconnaissance, and other public safety issues.

The program was turned over to Colorado’s Department of Public Safety, and is being spearheaded by the Center of Excellence for Advanced Technology Aerial Firefighting, which is integrating unmanned aerial systems into public safety, based on the laws depicted in House Bill 17-1070. With the unprecedented expansion of unmanned vehicle technology, Governor Hickenlooper thinks this bill opens the door utilize UAVs at their fullest extent in emergency response scenarios.

“Unmanned vehicle technology is moving so rapidly, and innovation is taking place at a rate I really didn’t anticipate. This industry is generating so much money and opportunities that hopefully the next administration recognizes (as we did) we’ve got to be partners,” says Governor Hickenlooper when I asked him about his hopes for Colorado’s next governmental administration regarding their stance on these technologies. “We need to create regulations that aren’t tied down with red tape and bureaucracies, but designed in partnership with the industry so the public feels safe and protected.”

With change this rapid, Governor Hickenlooper acknowledges the public may become apprehensive, and hopes to see the next governmental administration remain open and transparent about these programs.

“We hopefully want to see the next administration’s role (regarding the incorporation of UAV research into emergency responses and protocols) take after ours, and say to the public ‘look, we’re doing these tests and have certain places where we set up zones to fly unmanned vehicles.’ You want to assure the public it’s safe and we’re not going to fly one of these crafts over your house or use them for any similar intrusions,” Hickenlooper notes. “We (and the next administration) hope to instill a very high level of confidence in the public and show we have control without leaving room for any unintended consequences.”