The system, a trough or elongated area of low pressure, disrupted the normal northeast trade winds flow north of Oahu on April 12, 2018. This caused extremely heavy rainfall as the trough deepened and moved very slowly over Kauai during the weekend of April 14 and 15 and continued to bring rainfall through April 19.

On April 19, a Flash Flood Watch remained in effect for the entire state of Hawaii.

The National Weather Service in Honolulu noted in a bulletin issued at 3:53 a.m. HST: “The remnants of an old front lingering across the state in combination with an upper level trough moving overhead, will bring the threat for heavy rainfall and flash flooding. The heaviest rainfall is expected to fall from Oahu eastward to the Big Island, particularly in windward areas. Even though widespread heavy rainfall is not expected on Kauai, given the high levels of saturation from recent rainfall, any additional moderate rain falling for an extended period of time could quickly result in flooding problems.”

The 28.1 inches (713 mm) of rain reported in Hanalei within a 24 hour period was close to a record for the small town on Kauai’s northern coast. Almost 32.4 inches (822 mm) of rain was reported during the same period over Wainiha, Kauai. Flooding and mudslides over Kauai’s North Shore led to numerous people being rescued and evacuated. Hawaii’s governor issued an emergency proclamation for Kauai County on Sunday, April 15, 2018.

The GPM core observatory satellite flew over Kauai as storms were moving through on April 14, 2018 at 10:01 a.m. HST (4:01 p.m. EDT/2001 UTC). The satellite’s Microwave Imager (GMI) and Dual Frequency Precipitation Radar (DPR) data revealed the locations of heavy downpours that were moving through the area. GPM’s radar (DPR Ku Band) indicated that extremely intense showers moving northeast of Kauai were dropping rain at a rate of over 192 mm (7.6 inches) per hour. GPM’s radar also found that a few of these storms were reaching altitudes higher than 7.6 miles (12.3 km).

GPM is a joint mission between NASA and the Japan Aerospace Exploration Agency, JAXA.

Integrated Multi-satellitE Retrievals for GPM (IMERG) data generated by NASA’s Precipitation Processing System were used to show the pattern of rainfall accumulation as storms moved through the Hawaiian Islands during the period from April 10 to 16, 2018. The IMERG precipitation analysis revealed the locations of rainfall accumulation resulting from storms that were moving over Kauai.

The analysis indicated that the most extreme precipitation resulted from persistent rainfall that extended from northern Kauai northeastward. Average rainfall of over 478 mm (18.8 inches) was indicated by IMERG in parts of that area. Rainfall accumulation estimates greater than 267 mm (10.5 inches) were indicated over a larger portion of the area. 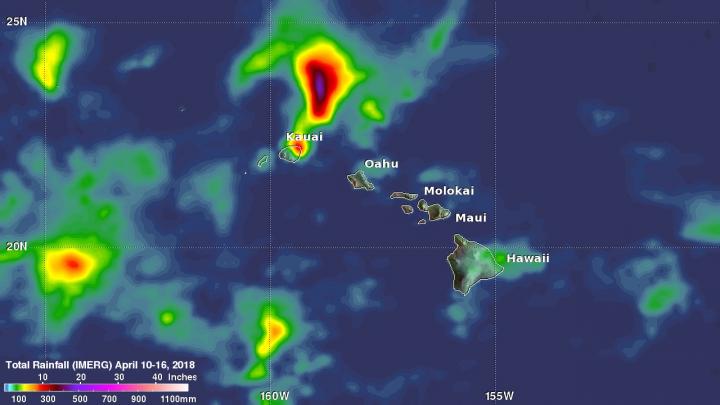 This IMERG rainfall accumulation animation shows rain over the Hawaiian Islands from April 10 through the 16, 2018. The analysis indicated that the most extreme precipitation resulted from persistent rainfall that extended from northern Kauai northeastward. Average rainfall of over 478 mm (18.8 inches) was indicated by IMERG in parts of that area. Rainfall accumulation estimates greater than 267 mm (10.5 inches) were indicated over a larger portion of the area. (Image Credit: NASA/JAXA, Hal Pierce)