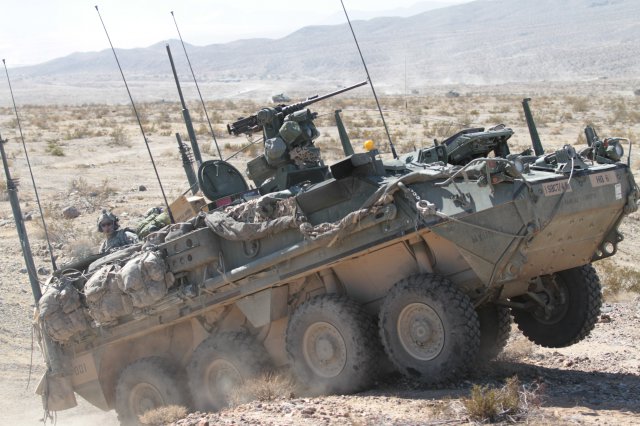 Soldiers, of the 1st Stryker Brigade Combat Team, 4th Infantry Division, tactically move a Stryker over the Mojave Desert during Decisive Action Rotation 15-10 at the National Training Center on Fort Irwin, Calif., Sept. 24, 2015. The Stryker and other ground combat vehicles are undergoing a number of upgrades, according to officials. Credit: Sgt. William Howard

Designs and engineering change proposals for existing vehicles have been largely finished, contracts are being awarded and some vehicles are being delivered and tested, said Ground Combat Systems, or GCS, Program Executive Officer, or PEO, Brig. Gen. David Bassett.

“It’s a really exciting time,” he said. There’s “plenty to keep us busy, new requirements emerging, and really great partnerships on how we can tailor the acquisition process, look hard at appropriate requirements, help our user understand what those requirements cost and make meaningful tradeoffs between desired capabilities.”

The Stryker, for example, is undergoing a lethality upgrade that will include better turret fire control and advanced sensors and cannon systems for the Germany-based 2nd Cavalry Regiment.

In addition, a separate engineering change proposal, or ECP, covers both infantry and vehicle carriers, and will address power and cooling deficiencies, while also allowing the platform to accept the Army’s communications network. Those prototypes have already been delivered to the Army, said Col. Glenn Dean, Stryker brigade combat team project manager.

“We are also looking at what we do for a fleet lethality solution. That will likely be a future ECP program or collection of programs. We’re working with our user to define what that its. Certainly, a cannon solution is going to be part of that mix,” said Dean, adding that other options are a weapons station with a javelin mount, extending the range of optics for a remote weapons station and using more netted long range advance scout surveillance systems.

“Over the course of the war, all these vehicles added an awful lot of weight,” Schirmer said. “The weight came from various kits that were each designed to address some new problem that cropped up in theater: a new threat, a new way of using the vehicles. Luckily we had margin. We had margin for space, weight and power that allowed us to add all those kits and adapt to a changing environment. The ECPs we’re doing now are largely intended to buy back some of that capacity because the future’s unknowable. In an uncertain world, our ability to adapt rapidly largely depends on the platform having some capacity to be able to make some changes.”

Balancing vehicle weight against protection against budget is a challenge, the men agreed. For example, a vehicle built out of titanium would be much lighter, Bassett said, but the cost would be astronomical.

“I think sometimes you hear people say if you had active protection, it would change the relationship between weight and protection on vehicles,” he said. “I think that’s largely a fallacy. Active protection is effective against certain threat sets with certain characteristics. In order for us to be able to take weight out, you have to be taking other armor off that currently protects us against certain threats. That threat is diverse enough that APS isn’t going to catch everything. You need a mix of capabilities.

“It’s about affordable materials and it’s about stopping a wide range of threats. When you think what the tank faces, it’s antitank guided missiles, it’s RPGs [rocket-propelled grenades}, it’s explosively-formed penetrators, which are typically fired at very close ranges so that an active protection system would have difficulty typically engaging such a threat. It’s also vulnerable on penetrators, which are a really difficult threat without conventional armor.”

Currently, they can upgrade a brigade of vehicles every 18 months, and they’re saving money wherever they can. Last year, for example, PM Stryker saved $53 million by refining its processes.

However, he said that if the continuing funding resolution extends beyond December, they’ll probably have to stop work on some of their programs. The Stryker lethality effort is mostly programmed for fiscal year 2016 dollars, for example. Any additional cuts, such as required by sequestration, “would break our modernization efforts on at least one of our major platforms. … We’re going to have to pick something and terminate it.”