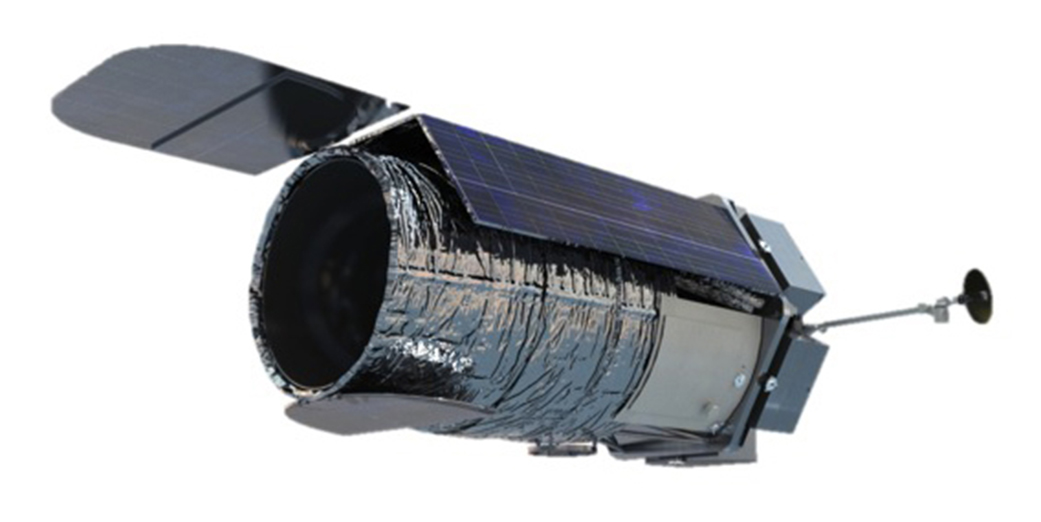 We all want the ability to peer into the future.

The powerful role that spaceborne telescopes can play in the future was underscored by a seminal study in 2010 called New Worlds, New Horizons in Astronomy and Astrophysics, written by the U.S. National Research Council.

That study, which laid out a blueprint for ground- and space-based astronomy and astrophysics for the decade of the 2010’s, rated WFIRST as the top-priority large-scale mission.

Match made in heaven

The WFIRST mission benefits greatly from a space-rated 2.4-meter-diameter telescope made available to NASA a few years ago by the National Reconnaissance Office (NRO).  This existing telescope was significantly larger than the conceptual telescope originally envisioned for the WFIRST mission.

Some tag it as a “match made in heaven.”

“As an agency, we asked ourselves what we could do with this unique telescope,” said John Gagosian, program executive for the WFIRST mission at NASA Headquarters. “We realized that by using a 2.4-meter diameter telescope to greatly increase the angular resolution of WFIRST we could obtain a lot of scientific improvement,” he adds.

Coupled with a to-be-developed coronagraph instrument, the capabilities of WFIRST would now include the possibility of directly imaging exoplanets. “It was a fortuitous series of events,” Gagosian notes.

The 2.4-meter telescope is known as the Astrophysics-Focused Telescope Assets (AFTA), and thus the current mission concept has been dubbed “WFIRST-AFTA.”

Exoplanet detection is revolutionizing planetary science. The count is on and quickly trending upward regarding the existence of planet populations beyond our own solar system. There are now nearly 2,000 confirmed planets orbiting other stars, many of these charted by NASA’s planet-hunting spacecraft, Kepler.

One core scientific objective of WFIRST is to detect planets using a technique called “microlensing.” This innovative technique infers the presence of planets by observing the way the gravity of the planets affects the refraction of starlight.

This is different from the “transit” technique used by the Kepler Space Telescope, and therefore WFRST is expected to find planets that Kepler cannot detect.

Using microlensing, WFIRST will search the cold, outer regions of planetary systems throughout the galaxy. Scientists expect to detect planets with masses from 0.1 Earth to 10,000 Earths. A large percentage of the planets likely found would be “super-Earths,” with masses about 10 times that of Earth. 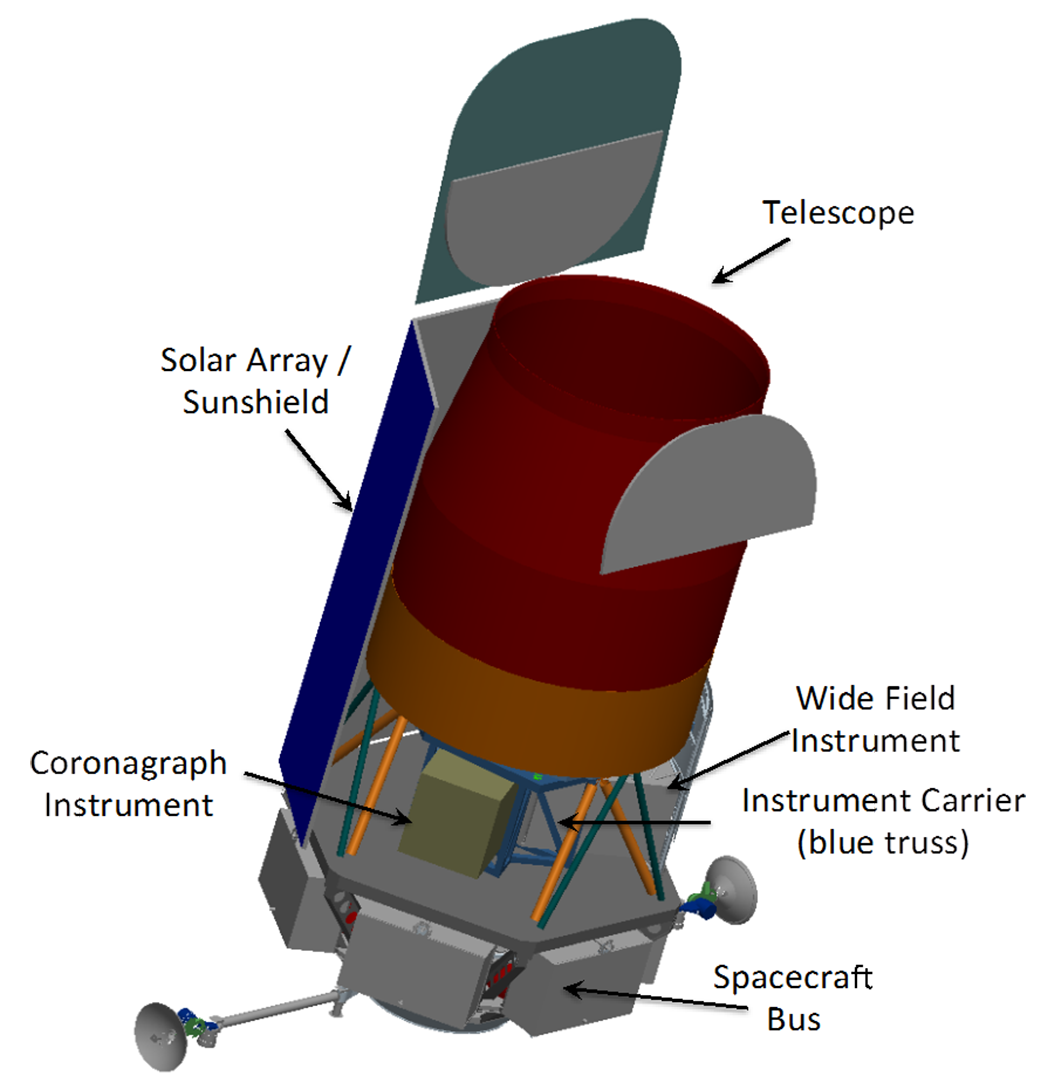 Microlensing is not the only exoplanet-hunting technique that WFIRST will use.

The optical performance of the large AFTA telescope has allowed NASA to add a coronagraph for direct imaging of exoplanets and debris disks. Using the coronagraph, WFIRST is expected to collect images of planets in other solar systems, and to study the composition of these planets’ atmospheres.

Work on WFIRST-AFTA is leveraging mature technology for flight readiness while harnessing cost control measures. There is a great “bang for the buck” value proposition in the mission. Additionally, WFIRST-AFTA is designed to be robotically serviceable.

The coronagraph works by very precisely blocking the starlight that would otherwise swamp out the evidence of planets circling their home star. “You are talking about a parent star that is more than a billion times brighter than the planet that’s orbiting it,” says Gagosian. “In the coronagraph, we need to send photons of light where we want them and get rid of the photons that we don’t want.”

The coronagraph’s imperative to damp out starlight is extremely challenging, making use of different masking technologies, in addition to a deformable mirror that is computer controlled. But if it performs as designed, WFIRST’s coronagraphic instrument will collect images and characterize the atmospheres of super-Earth planets and Neptune-like planets around nearby Sun-like stars.

The funding of the coronagraph for WFIRST matures direct imaging technologies for future space telescope designs now being contemplated. The ability to “mature technology” at NASA is gauged in terms of high technology readiness levels, or TRLs — a type of measurement system used to assess the development stage of a particular technology.

“The WFIRST coronagraph is definitely demonstrating new technology…and is a giant step forward,” Zhao points out. Down-selected by specialists from a number of candidate ideas, the high-tech coronagraph work is ongoing, with milestones being met in a step-by-step fashion.

“The coronagraph instrument is considered a technology demonstration,” Zhao says. “It will pave the technology path for future missions. This is a golden time to work on this challenging technology,” he adds.

Zhao says the gap between the current coronagraph state of the art and what will someday be needed to characterize a truly Earth-like planet is large. So the best way to close that gap is to fly an intermediate-performance coronagraph instrument such as the one on WFIRST-AFTA.

“We’re making good progress and I’m very proud of the dedicated and hardworking team from JPL and many other institutions,” Zhao adds.

“I am very pleased about the potential of WFIRST-AFTA to give the scientific community and the public a bounty of new knowledge.” Gagosian says.

WFIRST-AFTA will revolutionize our understanding of the expansion of the universe, the birth and evolution of galaxies and the formation and atmospheric composition of exoplanets.

“First and foremost, I see WFIRST as a tremendously promising mission that will help us understand the physics and origins of our universe,” Gagosian explains. The observatory, he points out, is also a great opportunity to demonstrate a technology that may allow future missions to discover telltale signs of life outside our solar system.

“We’re going to be proving the technologies and the techniques that will be employed later, perhaps on a bigger mission that’s specifically oriented around that purpose,” Gagosian observes.

WFIRST-AFTA permits risk reduction to take on technologies in the future, Gagosian says. “It’s our job here to make sure that investments in this project and those missions that follow provide the greatest benefit to humankind’s knowledge of the universe,” he concludes.