The “Internet of Things” could make cities “smarter” by connecting an extensive network of tiny communications devices to make life more efficient. But all these machines will require a lot of energy.

Rather than adding to the global reliance on fossil fuels to power the network, researchers say they have a new solution. Their report on a single device that harvests wind and solar energy appears in the journal ACS Nano.

Computer industry experts predict that tens of billions of gadgets will make up the Internet of Things within just five years, according to news reports. They’ll be in homes, syncing coffee makers to alarm clocks. They’ll be in buildings, managing lights and air temperature. But they’ll also require energy to run.

Sustainably generating more energy in cities close to where the devices will be used is challenging. Cities don’t have much space for towering wind turbines, for example. Ya Yang, Zhong Lin Wang and colleagues wanted to find a better way to power smart cities.

For the first time, the researchers have integrated two energy harvesting technologies in one: a silicon solar cell and a nanogenerator that can convert wind energy into electrical output. The solar cell component of the system delivers 8 milliWatts of power output (1 milliWatt can light up 100 small LEDs). The wind harvesting component delivers up to 26 milliWatts.

Together, under simulated sun and wind conditions, four devices on the roof of a model home could turn on the LEDs inside and power a temperature-humidity sensor. Installed in large numbers on real rooftops, the hybrid device could help enable smart cities. 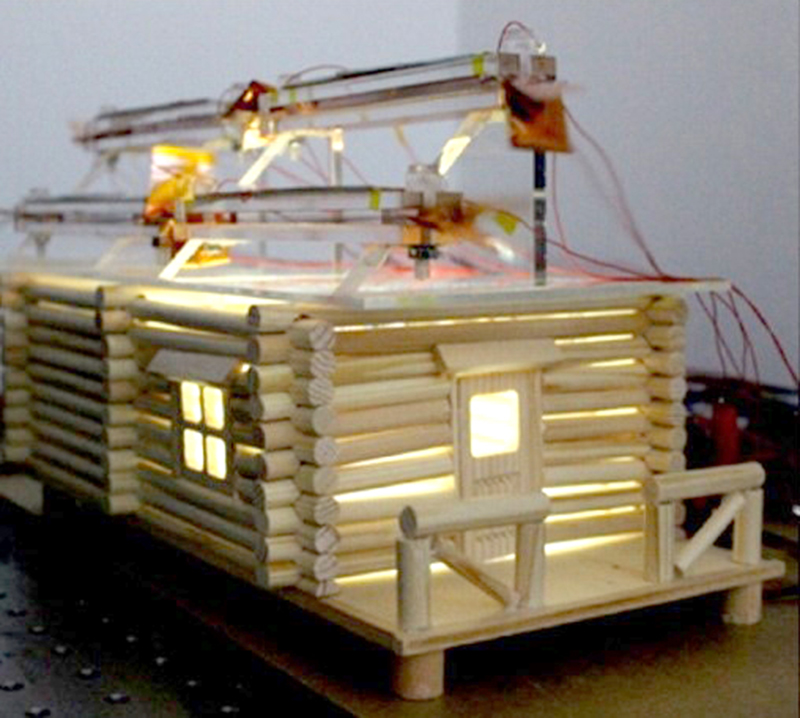 Hybrid solar and wind harvesting cells on the top of this model house collect enough energy to light it up inside. Image credit: American Chemical Societ