As President Donald Trump and Republicans in Congress devise a plan to replace the 2010 health law, new research suggests a key component of the law helped people with chronic disease get access to health care — though, the paper notes, it still fell short in meeting their medical needs.

Research published in the Annals of Internal Medicine found that the number of chronically ill Americans with insurance increased by about 5 percentage points — around 4 million people — in 2014, the first year the law required Americans to have coverage, set up marketplaces for people to buy coverage and allowed for states to expand eligibility for Medicaid, the federal-state insurance plan for low-income people. If states opted into the Medicaid expansion, people with chronic illnesses such as heart disease, diabetes, depression, and asthma were more likely to see those gains.

Still, the study suggests, the law fell short in terms of guaranteeing those people could get medical treatment, see a doctor and afford medications.

The study is the first to examine how the health law affected people with these long-term diseases, which require careful and continuous management, and whose treatment drives a vast majority of the nation’s health care costs. If these people don’t get regular treatment they are especially likely to wind up needing emergency care. 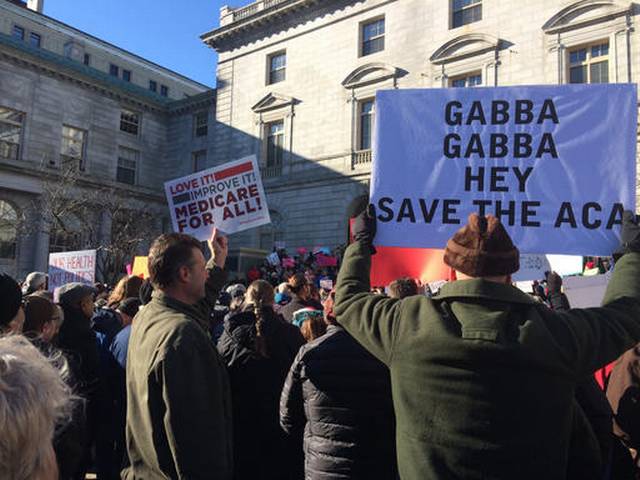 “This hones in on the patients that are most dependent on having coverage and access,” says Danny McCormick, an associate professor at Harvard Medical School and senior author on the study. “Most chronic conditions require ongoing treatment. And if you don’t get it, often it results in more expensive care downstream.”

As the GOP crafts its replacement plan, those findings could indicate what elements of the law are worth keeping, and what needs to be addressed. The Medicaid expansion in particular has come under heightened scrutiny from the GOP. This past weekend, a senior aide to President Donald Trump also said the administration wants to turn control of the program over to states, which experts say could result in less funding.

The researchers say their findings suggest reversing the Medicaid expansion would pose significant problems for people with long-term illness.

They used data from the Behavioral Risk Factor Surveillance System — an annual survey jointly run by state health departments and the Centers for Disease Control and Prevention — to examine records for more than 600,000 adults with at least one chronic condition. Diseases included coronary artery disease, stroke, asthma, pulmonary disease, diabetes, depression, and arthritis. They compared insurance rates in the three years and examined whether people used that insurance to see a doctor.

“There’s a clear difference between what happened for [chronically ill] individuals in states, based on how states implemented Medicaid. The Medicaid expansion was one of the strongest parts of the law,” McCormick says.

If policymakers are serious about using health dollars more efficiently, and getting better health outcomes, he adds, the findings support including such an expansion in any new policy platform.

The paper builds on research suggesting people generally were more likely to get insurance if they lived in states that expanded Medicaid. States such as West Virginia, Illinois, and Kentucky — which opted into the expansion — saw double-digit gains in coverage of chronically ill people.

“Medicaid expansion is one of the tools you would think of to help people with chronic conditions – and we are seeing more evidence this is the case,” says Benjamin Sommers, an associate professor of health policy and economics at Harvard’s public health school, who was not involved with this study. “The question of whether this informs [the policy] debate — it clearly should. It clearly should be relevant.”

That said, Obamacare was hardly a panacea, the researchers argue. Even after the law’s insurance changes, about 15 percent of people with chronic disease didn’t have coverage. More than one in four didn’t have a check-up in 2014. About 23 percent of people with chronic disease still had to go without doctors’ visits because of factors like cost. And those gaps were more pronounced for blacks and Hispanics. They were more likely on average to remain uninsured even after the health law took effect and to face obstacles in using new health insurance if they had it.

The paper suggests some possible causes: People didn’t understand how to use their insurance, or they had plans that required them to pay out of pocket large copays or deductibles — flat spending fees consumers have to front before coverage kicks in. Many marketplace plans were categorized as “high-deductible plans.”

“You’ve got hypertension or diabetes, and you have a very low income. It’s really hard to take your medications” without coverage and minimal cost-sharing, McCormick says. “Someone who’s insulin dependent who doesn’t get insulin? it’s going to result in an emergency room visit, or a hospital visit. There’s a large potential for downstream complications.”

But those gaps in coverage and access to care probably got smaller in the years following 2014, Sommers suggested. Other research has shown that with time, more people got insurance and learned how to use it.

“This is likely the tip of the iceberg in terms of what the Affordable Care Act was doing,” Sommers says. “It’s useful and part of a larger body of evidence making it clear access to care has improved among a range of populations.”

But, he notes, the findings do emphasize an important issue: The health law by itself did not expand health care to all Americans, or even all Americans with chronic conditions.

“The Affordable Care Act is not a universal coverage law. It’s a huge expansion for coverage but still left 20 to 30 million uninsured,” he says. “Even for those with coverage, some are still experiencing challenges.”

Trump has not yet offered his plan but said universal coverage will be part of his health care plan — although aides have since walked back on that claim. Meanwhile, an analysis this month by the nonpartisan Congressional Budget Office suggested that the repeal plan offered last year by Republicans eventually would increase the uninsured population by as many as 32 million.

This story was prepared by Kaiser Health News.