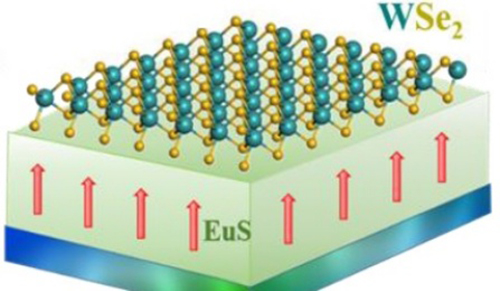 Researchers at the University at Buffalo may have found a way to increase the efficiency of 2D semiconductors used for computer chips. Ferromagnetic compound can be used to pull the energy valleys apart and maintain them at different energy levels. This means the separation of valley energies can be increased by 10 times more than what can be done with an external magnetic field.

“Normally there are two valleys in these atomically thin semiconductors with exactly the same energy,” explains Hao Zeng, team lead and professor of physics. “These are called ‘degenerate energy levels’ in quantum mechanics terms. This limits our ability to control individual valleys. An external magnetic field can be used to break this degeneracy. However, the splitting is so small that you would have to go to the National High Magnetic Field Laboratories to measure a sizable energy difference. Our new approach makes the valleys more accessible and easier to control, and this could allow valleys to be useful for future information storage and processing.”

This means the chips will require a very small amount of energy to switch electrons into and out of valleys. It also produces less heat than chips that use electrical charges for the same effect.

In order to separate the valleys without magnetic fields, the team used a two-layered. heterostructure “sandwich” made of a 10 nanometer thick film of magnetic europium sulfide on the bottom and less than 1 nanometer of dichalcogenide WSe2, a transition metal, on the top. This makes it a particularly stable structure for use in nonvolatile memory applications.

At the more extreme end of the list of possible uses is a chance to fly past Moore’s law.

“The reason people are really excited about this, is that Moore’s law [which says the number of transistors in an integrated circuit doubles every two years] is predicted to end soon. It no longer works because it has hit its fundamental limit,” Zeng says.

“Current computer chips rely on the movement of electrical charges, and that generates an enormous amount of heat as computers get more powerful. Our work has really pushed ‘valleytronics’ a step closer in getting over that challenge.”

For now, though, the effect has only been proven to work at 7 degrees Kelvin (-447 F). Unless it’s cold, this type of valley separation only occurs in the university’s results every five or 10 years.