Senate Democrats on Tuesday pressed President Donald Trump’s nominee for the top health post to explain how he would fight skyrocketing drug prices — demanding to know why they should trust him to lower costs since he did not do so while running a major pharmaceutical company.

Alex M. Azar II, the former president of the U.S. division of Eli Lilly and Trump’s pick to run the Department of Health and Human Services, presented himself as a “problem solver” eager to fix a poorly structured healthcare system during his confirmation hearing before the Senate Finance Committee. Azar said addressing drug costs would be among his top priorities.

But armed with charts showing how some of Eli Lilly’s drug prices had doubled on Azar’s watch, Democrats argued Azar was part of the problem. Sen. Ron Wyden of Oregon, the committee’s top Democrat, said Azar had never authorized a decrease in a drug price as a pharmaceutical executive.

“The system is broken,” Wyden said. “Mr. Azar was a part of that system.”

Azar countered that the nation’s pharmaceutical drug system is structured to encourage companies to raise prices, a problem he said he would work to fix as head of HHS.

“I don’t know that there is any drug price of a brand-new product that has ever gone down from any company on any drug in the United States, because every incentive in this system is towards higher prices, and that is where we can do things together, working as the government to get at this,” he said. “No one company is going to fix that system.” 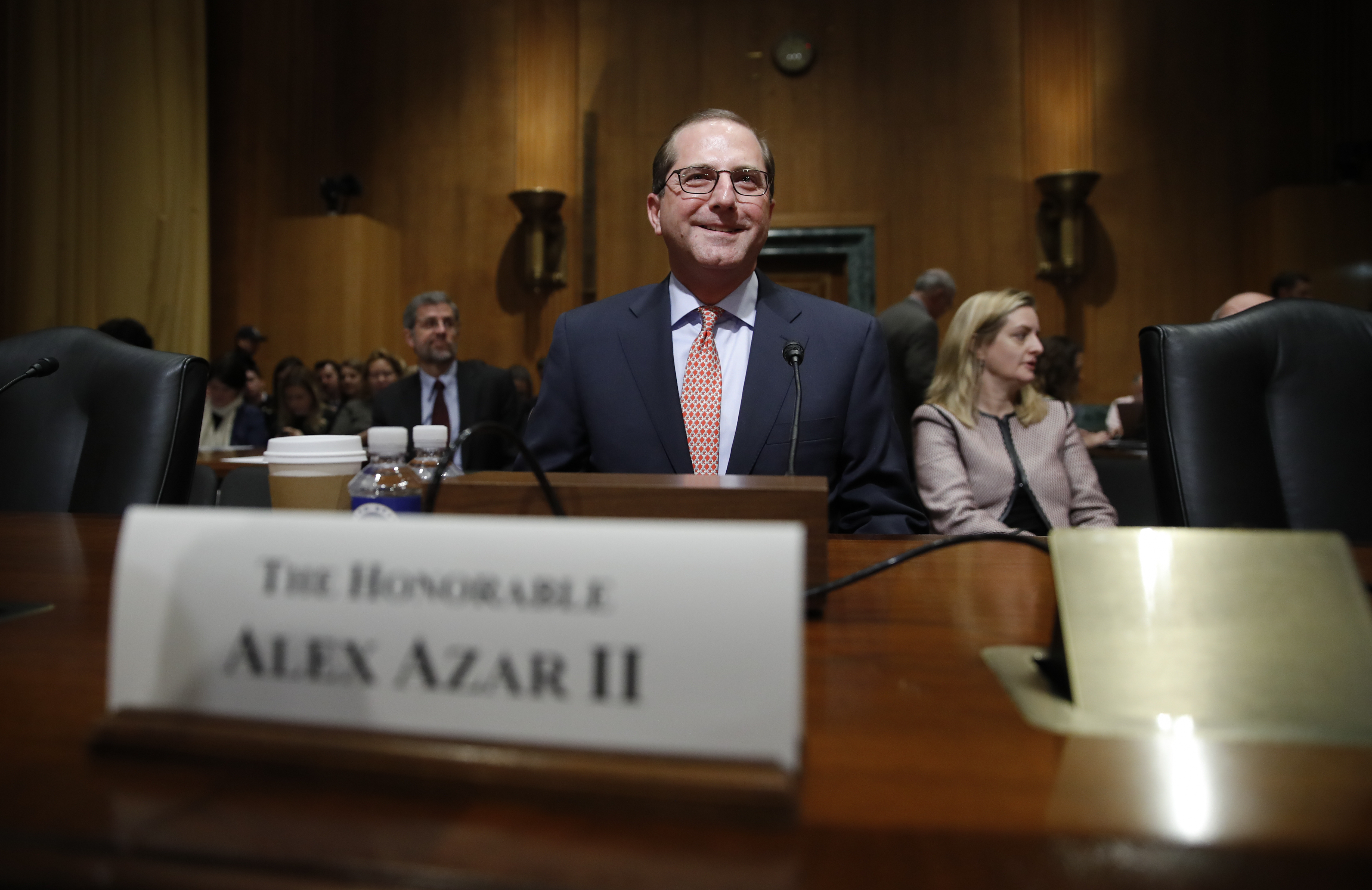 Alex Azar takes his seat as he arrives to testify at a Senate Finance Committee hearing on Capitol Hill in Washington, Tuesday, Jan. 9, 2018, to consider his nomination to be Secretary of Health and Human Services. (AP Photo/Carolyn Kaster)

Azar’s confirmation hearing Tuesday was his second appearance before senators as the nominee to lead HHS. In November, he faced similar questions from the Senate Health, Education, Labor, and Pensions Committee during a courtesy hearing.

If confirmed, Azar would succeed Tom Price, Trump’s first health secretary, who resigned in September amid criticism over his frequent use of taxpayer-paid charter flights. A former Republican congressman who was a dedicated opponent of President Barack Obama’s signature health care law, Price had a frosty relationship with Democrats in Congress as he worked with Republicans to try to undo the law.

Price and the Trump administration often turned to regulations and executive orders to undermine the Affordable Care Act, since Republicans in Congress repeatedly failed to enact a repeal. “Repeal and replace” has been the president’s mantra.

But at the hearing, Azar was circumspect about his approach, noting that his job would be to work under existing law. “The Affordable Care Act is there,” he said, adding that it would fall to him to make it work “as best as it possibly can.”

Senate Republicans touted Azar’s nearly six years working for the department under President George W. Bush, including two years as a deputy secretary. Committee Chairman Orrin Hatch (R-Utah) praised Azar’s “extraordinary résumé,” adding that, among HHS nominees, he was “probably the most qualified I’ve seen in my whole term in the United States Senate.” Hatch, who is the longest-serving Republican senator in history, has been a senator for more than 40 years.

In addition to drug costs, Azar vowed to focus on the nation’s growing opioid crisis, calling for “aggressive prevention, education, regulatory and enforcement efforts to stop overprescribing and overuse,” as well as “compassionate treatment” for those suffering from addiction.

Pressed about Republican plans to cut entitlement spending to compensate for budget shortfalls, Azar said he was “not aware” of support within the Trump administration for such cuts.

“The president has stated his opposition to cuts to Medicaid, Medicare or Social Security,” Azar said. “He said that in the campaign, and I believe he has remained steadfast in his views on that.”

But Democrats pushed back, pointing out that Trump had proposed Medicaid cuts in his budget request last year. Sen. Sherrod Brown (D-Ohio) said such cuts would hurt those receiving treatment for opioid addiction.

“What happens to these people?” he said.

Despite such Democratic criticism, Azar is likely to be confirmed when the full Senate votes on his nomination. An HHS spokesman Tuesday pointed reporters to an editorial in STAT supporting Azar, written by former Senate majority leaders Bill Frist and Tom Daschle — a Republican and a Democrat. “We need a person of integrity and competence at the helm of the Department of Health and Human Services,” they wrote. “The good news is that President Trump has nominated just such a person, Alex Azar.”

This story was prepared by Kaiser Health News.