Global shutter CMOS image sensors are prevalent in the machine vision world for good reason today: Their optical performance is equal to that of Charge-coupled devices (CCD) sensors and rolling shutter sensors while having many advantages over those other technologies.

Replacing CCD and rolling shutter sensors with global shutter CMOS sensors is on the rise in many areas including the lower resolution market. For very high resolutions, CCD sensors still dominate, but there is a clear shift to CMOS even in lower-resolution markets, which will lead to less complex camera design and operation, while increasing the frame rates and introducing global shutter. 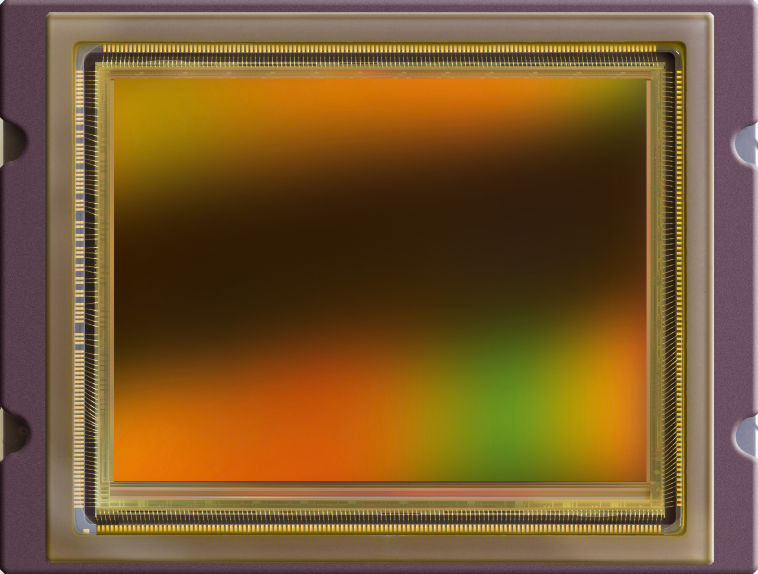 One example is the current CMV product family from ams (Figure 1), which uses a patented 8T pixel design with true Correlated Double Sampling (CDS) and pipelined global shutter. Global shutter CMOS solutions like these offer a wide range of resolutions – and in the case of the CMV family, it ranges from VGA up to 20Mp. The most recent addition to the ams family is  the CMV50000, a 47.5 Mp image sensor capable of running at up to 30 fps at full resolution in a 35-mm optical format (36.43 × 27.62 mm).

By using a 7920 × 6004 pixel array with a 4.6-µm 8T pipelined global shutter pixel with true CDS, these new sensors offer increased performance and functionality. Even with a smaller pixel size, similar and better performance is achieved. The sensor is equipped with a 12b analog-to-digital conversion (ADC), has a very low noise level (8.8e) and a high linear full well capacity (14500e) resulting in a dynamic range of 64 dB. The dark current is low (66 e/s at 60°C) and this, together with the on-chip optical black clamping, enables the use of long exposure times of several seconds, even without cooling.

With its sensor, ams provides on-chip row correction, resulting in a clean image emerging directly from the sensor. Binning can also be enabled increasing the full-well capacity (FWC) to ~58ke and so doubling the signal-to-noise ratio (SNR) to see more detail in bright images. For its part, the ams sensor also offers an interleaved exposure HDR mode, up to 10 Regions of Interest (ROI), an accurate on-chip temperature sensor, and several trigger modes and up to x4 analog gain, all controlled via simple SPI registers. It achieves this at 30 fps at full resolution, or even faster with a smaller window.

Attributes that make CMOS global shutter solutions ideal for high-end machine vision applications include high resolution, global shutter and fast frame rates. High resolution means users can either increase the total inspection area or choose to have more details visible instead. Compared to the earlier sensors, newer versions may provide a gain of as much as 12 times in either area or detail.

When the new sensors incorporate low noise and x4 analog gain, fine detail will show even in difficult lighting conditions. And due to the 35-mm optical format, standard optics can be used with the camera.

With flat panel display inspection more and more automated, along with the fast succession of new trends and technologies, high performance image sensors increasingly are in demand.

The physical size of displays in TVs, smartphones and other devices in general is becoming larger, as well as increasing resolution (e.g. 4K and 8K UHD) and higher pixel densities means the demand for high resolution inspection systems is growing rapidly.

Besides the large displays, the number of devices equipped with micro displays (like smartwatches, AR glasses, IoT) is also on the rise. These small displays do not allow for defects, as they will be immediately noticeable by the end user. Additionally, new technologies (OLED, Quantum Dots, mini LEDs …) are emerging that require even higher performance in the inspection system.

CMOS solutions with high resolutions allow for inspection of larger and higher resolution displays or for the testing of multiple small displays at once, decreasing overall test time. Users can test a full 8K display with 1:1 sampling for light uniformity, and test a full 4K or 2K display with a 4:1 or 16:1 oversampling ratio to inspect individual display pixels.

When compared with other image sensors at this resolution, the CMV50000 from ams, for example, has a high frame rate of 30fps, helping to decrease test time. Multiple lower resolution cameras with optics can now be exchanged for just one with higher resolution, decreasing the system cost.

The low noise, high dynamic range and high SNR of these new sensors make them ideal for testing for light uniformity (mura) where the blemishes are of low contrast and gradual across the display, as well as OLED pixel luminance testing, where the light variations differ from pixel to pixel.

The high image quality with a very low dark current and black clamping make long exposures possible and together with the x4 analog gain, will show even the faintest light leaking out of the display. The binning option of the CMV50000 doubles the SNR making even more variations in bright images visible.

Another application in which these new global shutter CMOS image sensors will excel in is aerial imaging. With a large 35-mm format and high resolution, these sensors will result in a lower GSD (Ground Sample Distance) or a higher altitude of a drone.

Using a rolling shutter sensor on drones causes the so-called ‘jello-effect’ when capturing images because the shutter position moves during the exposure time causing image distortion. This distortion has an influence on the accuracy and has to be cancelled out afterwards (or implemented with a mechanical shutter) to make the images and measurements correct. Having a global shutter in which all pixels start and stop exposure at the same time solves this issue completely. This means the drone will be less restricted in speed and movements while still producing distortion-free images.

CMOS sensors like these can easily scale down frame rates to reduce power, bandwidth, storage and camera complexity if the full 30 fps is not needed.

The operating temperature range of the sensor is -40°C to 70°C, so they can be used in the harsh environments that come with aerial imaging.

With CMOS sensors offering  both monochrome and RGB variants, along with a 35mm Full Format  and high resolution (> 8K UHD), they are ideal for video and broadcasting applications. ams’s CMV50000, for instance, can run at up to 40 fps in 8K (7680 ×4320) resolution.

With high resolution in the sensor, users can either scale to 4K (or HD) and improve the image quality even more, or select one or more 4K or HD crops to output the area of the image with the ‘action’ while still producing a sharp 4K or HD image (digital zoom).

The low noise, high dynamic range and on-chip corrections provide a high quality image directly out of the sensor, while the global shutter ensures that high-speed motion is captured without distortion.

An evaluation kit for the CMV50000 (Figure 2) is available from ams. The EVK is able to capture and save full resolution images at full frame rate due to its fast on-board memory. These raw images can be transferred to a PC for later inspection. The EVK uses a USB 3.0 connection and is compatible with the USB3Vision standard. It comes with easy to use software (based on NI MAX) and is easy to integrate in to a test system for full evaluation of the image sensor. 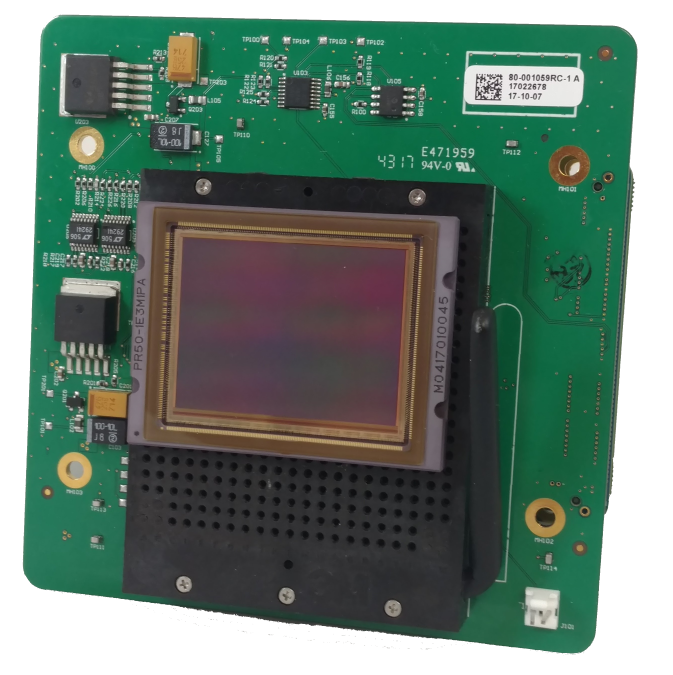