Walt Disney Imagineering builds the Disney experiences you always remember — from jamming with the animatronic Country Bears to shivering in the Pirates of the Carribean boat to admiring Ariel’s perfectly flowing hair on The Little Mermaid ride.

But there’s one telltale experience that truly represents Disney to everyone: the castle. So when it came time to design the Enchanted Storybook Castle for the Disney Shanghai Resort, slated to open in 2015, the Imagineers really went to work creating one like none other.

“This is, by far, the most complex castle we’ve ever done,” says David Abair, Senior Concept Architect at WDI who worked on the design of the Storybook Castle. “We’ve got a restaurant, a stage show, a boat ride, a walk-through, a meet-and-greet, a grand staircase, and a whole host of support spaces underneath. It was because of this complexity that we knew the process would necessitate a different approach to the design. It was one heavily reliant on 3D modeling and on coordination between all of the design disciplines involved.” 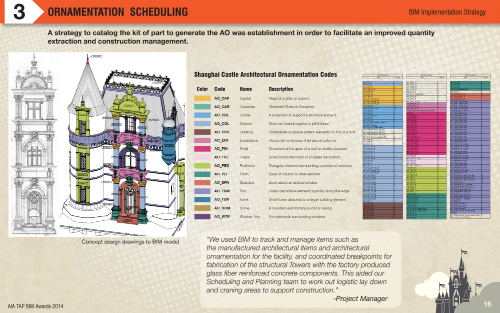 The challenge of the Enchanted Storybook Castle was to create a reasonable design companion to Walt Disney World Resort’s Cinderella Castle while also including a much more modern and complex interior, including a central double-helical staircase, restaurant, fountain pumps, a boat-ride system and its maintenance facility, and a children’s salon, among many other features.

The building does not look exactly like Cinderella Castle, as the Enchanted Storybook Castle is the first Disney castle to feature all of the company’s film princesses. But it does take certain design cues from iconic Disney towers and architectural details, such as its windows and roofs. At more than 200-feet tall, it’s also the largest of Disney’s castles.

Building a BIM Castle in the Cloud 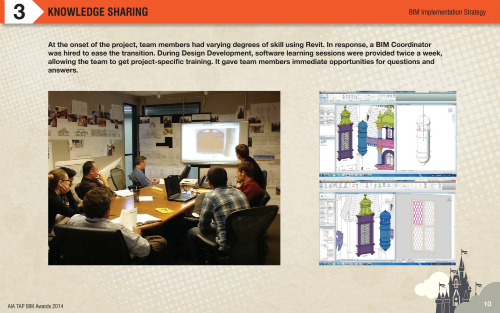 Although the architectural team made the conversion to Revit software, the Structural and MEP disciplines within the WDI team continued to use AutoCAD. To facilitate data exchange between the disciplines, the team developed an in-house workflow as well. Custom scripts allowed design files to easily and automatically provide a daily output of architectural Revit information for the other disciplines.

Many disciplines — 142 in all, including architects, engineers, and sub-contractors—worked on opposite sides of the globe to design the project together.

“Another challenge was that the design, about halfway through, had to be localized in Shanghai,” said Eric Anderson, AIA, the project integration manager at WDI. “We had two sides of the world in the workflow—in Glendale and in Shanghai. So one of the things we did to disseminate information across the team was to make a BIM information diagram to show who is responsible for what and how their information is being passed down across the globe.”

Because of issues with Internet connectivity in China, the team used a cloud-based construction collaboration platform called Buzzsaw to transfer updates to the BIM model back and forth between Glendale and Shanghai.

Once the model was properly set up and communication on both sides of the world was a go, WDI’s design team turned to architectural detail. A BIM “surge team” assisted in creating intelligent, parametric content within the model. The details comprised artificial terrain and architectural ornamentation for a period-correct medieval castle that included windows, doors, complicated roof structures, turrets for the towers, and the double-helix central staircase. All of these details were saved as Revit Objects in a central library because many of them had to be used in several different places in the castle. 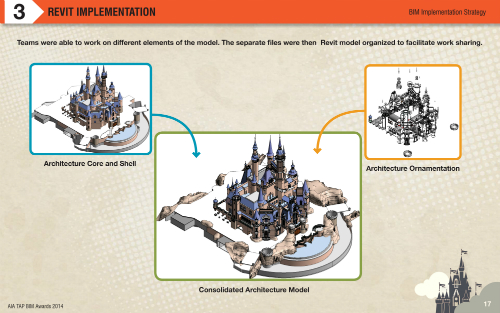 WDI established naming conventions to catalog hundreds of BIM objects created in-house, such as cornices and antique windows, all with a standard naming convention. All that architectural ornamentation facilitated improved quantity extraction and construction management.

Attributes assigned to geometry allowed WDI’s architects and engineers to visualize a material breakdown of the building, which assisted in making design, coordination, and operations decisions. That included exact amounts of concrete and other materials for the two fireworks-launching platforms on the building. Attributes were then added into the objects to reveal how the materials worked together to withstand flame-spread.

The coordinated 3D model allowed all teams to design in the context of a truly integrated building. Design was done on time, construction on the castle began last year, and Disney’s original plan to open The Enchanted Storybook Castle with the rest of Disney Shanghai in late 2015 is still on schedule.

Because of the integrated workflow and innovative use of BIM, it was honored with a 2014 AIA TAP (Technology in Architectural Practice) Award for Delivery Process Innovation.

How’s that for Disney magic?

This article originally appeared on www.lineshapespace.com.