You know something’s awry when your building starts melting nearby cars.

London’s year-old 20 Fenchurch Street tower is a stunner. But the same curved glass that gives the 37-story tower the nickname “The Walkie Talkie,” also has a knack for concentrating sunlight.

The result: a hot spot that melted part of a nearby Jaguar XJ and cooked shampoo in a local barber shop. It’s even been used to fry eggs.

Such “death rays” are a growing problem, thanks to a new generation of glass-sheathed buildings with radical computer-designed curves. Those curves reflect — and concentrate — light in ways that have been hard for designers and engineers to predict. Until now.

Our demo at NVIDIA’s annual GPU Technology Conference, in Silicon Valley, taps into the power of GPUs to show how London’s fifth-tallest building came to be called the “Fryscraper.” 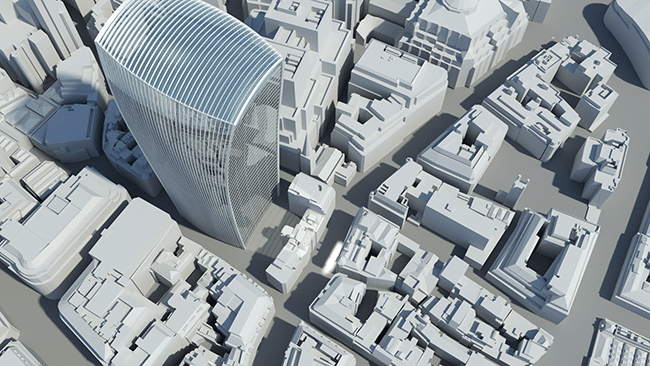 And Iray We Go

Rendering — the process of turning a digital model into an image on a screen — isn’t new, of course. Nor is ray tracing, which tracks the way beams of light interact with objects in their environment. What’s new is how our Iray ray-tracing technology takes advantage of GPUs to render detailed models in real time (see “NVIDIA Brings Interactive, Physically-Based Rendering to the Mainstream”).

The result is revolutionary: Rather than relying on technology that takes hours to create a single, static image — a snapshot — designers, using Iray, can view rich digital images as they work. And they can see how light interacts with their design over long stretches of time — as the sun moves across the sky at different times of the day and year — rather than just a moment or two.

NVIDIA is putting these tools within reach of every designer with plug-ins that will build this capability into the most popular design tools. It’s a move that’s sure to save time. And, potentially, trouble.

In fact, we found the Walkie Talkie’s solar glare could’ve been worse. Alter the building’s curves, just a nudge or two, and it could  create a beam hot enough to melt lead.

Such powerful simulations build on technology we first demonstrated at last year’s GTC. We showed, together with Honda, the first interactive visualization of an entire car.

Our demo didn’t just spin around a digital prototype. We showed how you could section the vehicle and peel off layers to view the innards of the car, right down to the Accord’s electrical wires and seat springs.

Technology like this promises to solve a huge number of common design problems. And some that aren’t so common. 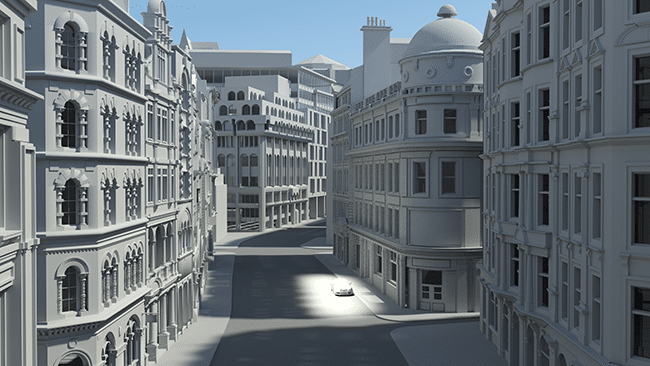 Take 20 Fenchurch – its glass curves create a spot where the temperature can rise to almost 200 degrees Fahrenheit. Or the Vdara Hotel, just off the Las Vegas Strip — its concave glass facade creates temperatures by the pool hot enough to melt plastic. Or L.A.’s extravagant Walt Disney Concert Hall — it heated up nearby condos, driving residents to draw their shades and run air conditioners.

None of this is the work of mad scientists or Bond villains. The structures were created by architects and engineers who lack the tools to predict how their designs will interact with the world around them.

In the past, modeling reflected light has been a time-consuming procedure. It’s usually reserved for presentations of near-final designs. And designers build those presentations around specific lighting conditions. They’re snapshots, not simulations.

Our new Iray 2015 rendering technology changes that. When paired with our new Quadro M6000 graphics card — the world’s most powerful GPU — Iray 2015 models the way light bounces around a scene as design teams tweak their models.

And rather than having to wait hours to create photorealistic images that are ready to put in front of a customer, designers can just add more GPUs to create higher-resolution models in an instant.

Put our VCA in a data center, and design teams can call on its rendering power when and where it’s needed. Every NVIDIA Iray product will include the ability to stream rendering from machines running our Iray Server software.

All this technology works with the tools designers already use. We’re making Iray accessible to millions of users with add-ins for popular 3D creation applications, including Autodesk’s 3ds Max, Maya and Revit, McNeel Rhinoceros and Maxon Cinema 4D.

With this new generation of prototyping tools, designers and engineers no longer have to build detailed physical models. Or create movies of rendered objects. Instead, designers can see their work in real time.

That can save months. Or years. And even save a few Jaguars from the next “fryscraper.”