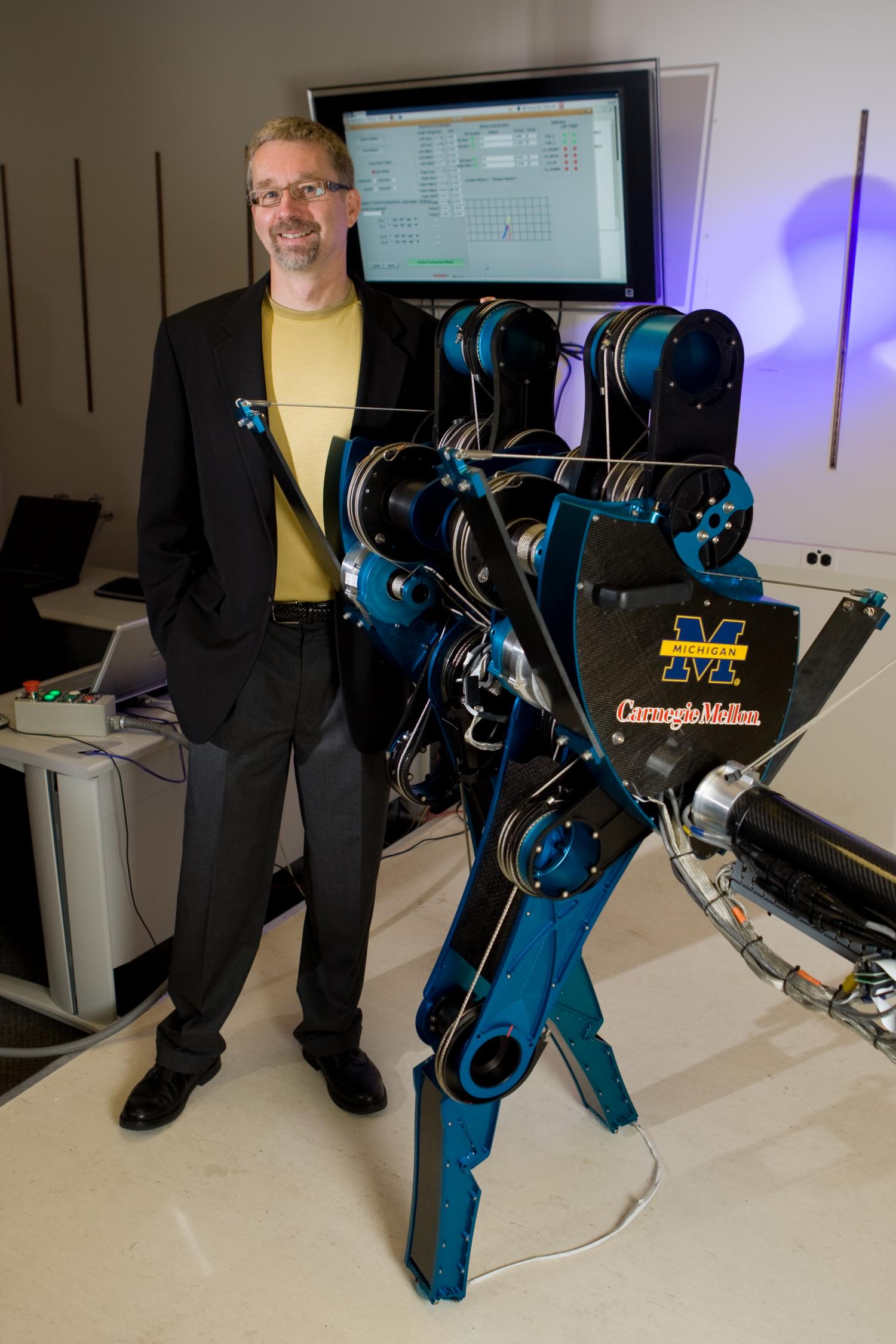 Rescuers in Turkey are working tirelessly to free this young boy, one of the many victims of Sunday’s devastating 7.2 magnitude earthquake.

He’s not yet been freed, but some have been lucky. Rescue workers manage to carry this toddler to safety on Monday morning.

Some of the survivors aren’t badly injured. Others, when rescued, are being taken straight to hospital.

More than a thousand people are feared dead following the quake, and many more are thought to be still trapped under collapsed buildings. For them, time will soon start running out.

This was the call from an ITN/ODN television news reporter following a massive 2011 earthquake in Van Province, Turkey.

For Jessy Grizzle, a robotics engineer at the University of Michigan in Ann Arbor (UM), events like this remind him of the importance of his work—developing feedback and control algorithms that one day will give bipedal robots the balance needed to conduct search and rescue missions in dangerous environments.

“Tragedies like these remind the robotics community that robots are needed,” he says. “They certainly keep me and my team focused on achieving the best walking robot control algorithms we can.”

Grizzle, along with a group of robotics engineers and students at UM, is not only working to develop algorithms—self-contained, step-by-step operations—to be performed by walking robots, he’s working to revolutionize them.

Existing bipedal robots have control software that relies on sensors to precisely read the various features of a walking surface. They also have large, flat feet to help maintain balance when walking. These designs, say some engineers, drastically limit the kind of locomotion that can be achieved.

For example, a robot’s flat feet fail to account for variations in the ground surface the way standard human feet do, which perform thousands of minute adjustments and rotations of the heel, foot and toe with respect to the ground. Plus, flat-footed designs do not easily allow bipedal machines to adjust their balance, pick up their legs and avoid obstacles as required in human work environments or search and rescue situations.

“In practice, large, heavy feet are used to avoid normal foot rotation, which can be very useful for accommodating uncertain environments,” he says.

In addition, bipedal robots require scientists and engineers to reprogram them to accomplish different walking tasks. A robot programmed to walk over a flat floor would be tuned differently than another robot capable of traversing stairs or stepping over fallen debris as seen in a video from the 2015 DARPA Robotics Challenge.

The switch between tasks is difficult and time-consuming. Grizzle wants bipedal robots to be able to make the transitions with speed and to walk faster, much faster. He also wants them to step over and around obstacles, and on uneven walking surfaces, without tipping over.

To accomplish this, he has two risky, but potentially transformative goals in mind. The first is radically updating the feedback control algorithms that allow robots to stand, walk and step over obstacles. The second involves developing mathematical designs for robot balance that can quickly be transferred from one walking robot to another.

Working with a National Science Foundation program called INSPIRE that funds risky, potentially transformative, cross-disciplinary research, Grizzle and his team aim to make their goals a reality. NSF’s Directorates for Engineering, Computer and Information Science and Engineering, and Mathematical and Physical Sciences support the research.

“Our overriding objective is to develop control algorithms that give bipedal robots a keen sense of balance,” says Grizzle, “making them capable of walking rapidly over rough terrain, without overreliance on precise measurements of the ground profile.”

To understand where he’s going, it’s necessary to look at where he’s been, starting with MABEL, a novel, NSF-funded, bipedal robot in Grizzle’s Control Systems Laboratory at UM.

MABEL breaks the rules. Rather than walking on flat feet, MABEL walks on unactuated point feet. In other words, MABEL has no feet at all in the traditional sense.

Actuators are the muscles of a robot; they convert stored energy into movement. MABEL’s feet have no actuators. Instead, it walks on what look like stilts. Its feet have no supplemental pivot points that can be rolled to help keep balance such as ankles, heels or toes that rely on anatomical muscles.

As a substitute, MABEL depends on next-generation control algorithms that give it not only an ability to walk, but also to run. Tests show MABEL, like some athletes, can run 6.8 miles per hour with both feet in the air for 40 percent of each stride. In addition, without falling over, it can seamlessly step over, off and on obstacles.

When MABEL moves, sensor data from the robot’s joints are fed back into the newly designed control algorithm that computes in real-time what MABEL’s next step should be. It works step after step, giving it human-like walking and running capabilities.”We have shown that our mathematical models exhibit behaviors consistent with normal walking and running,” says Grizzle. “Assumptions such as flat-footed walking are no longer required.” 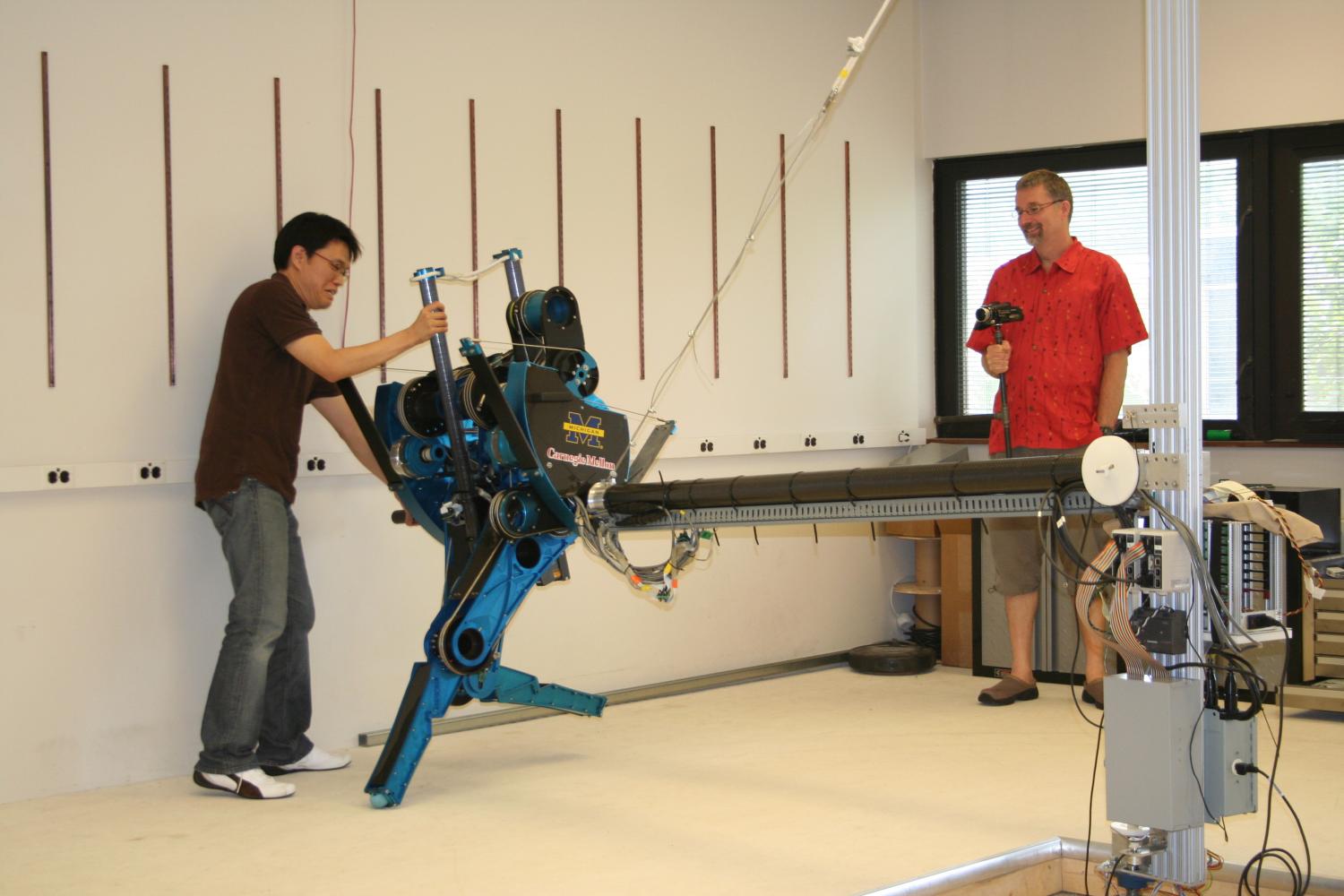 MABEL is seen here with a lateral support boom. The boom prevents it from moving side to side but does not prevent it from tipping forward when it walks. Hae-Won Park and Jessy Grizzle are with it. (Credit: Catharine June, University of Michigan)

The future of walking and running robots

The next step may be the team’s biggest challenge: developing mathematical designs for robot balance that easily can be transferred from one robot to another to enable similar walking performance across multiple platforms. Success would remove much of the trial, error and time needed to design bipedal-robot control algorithms.

The design difficultly revolves around differences in the center of mass found in robots with varying “anatomies.” For instance, one robot may have a low center of mass, while another robot has a high center of mass, making a universal controller that maximizes balance for multiple walking robots hard to achieve.

Today’s high-end, humanoid robots have mathematical models that depend on 50 or more anatomy-related variables to produce balance. But their control algorithms use only a handful of those variables to produce a simplified version of the machine’s center of mass. This accounts for much of the awkward movement and primitive elements of balance seen in most current bipedal robots.

Grizzle takes a different tact. His control algorithms use the full complexity of a robot’s mathematical model. Thus far, the team has used this method to design balance algorithms that perform relatively well when the robot walks in a straight line, but the algorithms still struggle when the robot moves laterally.

Last summer, however, Aaron Ames, an associate professor of electrical and computer engineering at Georgia Institute of Technology, realized Grizzle’s goal in part by integrating Grizzle’s method in the core algorithm of a walking, humanoid robot called DURUS.

Ames was able to extend Grizzle’s basic method to allow more phases in DURUS’ walking gait. In addition, he developed a program that allowed him to optimize his algorithm in minutes instead of hours, bringing into view Grizzle’s goal of reducing the time needed to generate robot control algorithms.

“I think this marks an important milestone in transferring dynamic walking algorithms between multiple robotic platforms,” says Ames, “and realizing these concepts on advanced humanoid robots.”

As the technology continues to grow, robotics engineers believe the future for walking, assistive and rescue robots is bright.