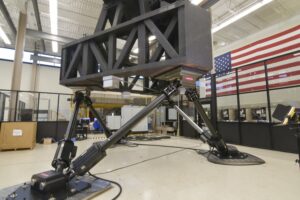 The system absorbs the short-term energy bursts that occur with flight simulation and vehicle design for later use.

With more than 1,000 motion systems installed worldwide, Moog’s team drew on this experience to develop not only the new Gen3 motion base but also the DE2020 technology.

With the DE2020 system, engineers used proprietary Moog technology in Formula 1 race cars to design an energy recovery system for the Gen3 motion system. The system absorbs the short-term energy bursts that occur with flight simulation and vehicle design for later use. The DE2020 eliminates the need to size electrical power to handle peak loads, even if the peaks rarely occur during a work cycle. The result saves energy, reduces costs, and streamlines cable design and power connections for Gen3 motion system users.

“During normal operations, a motor or motion system generates a regular load. But during acceleration, a system requires more short-term energy, while the release of energy from mechanical inertia or braking mostly converts to heat without being used,” said Tim Herget, a staff systems engineer for Moog.

The DE2020 system meets peak loads by drawing power from the Gen3 motion base’s capacitor banks while using energy gains from braking and mechanical inertia to recharge the capacitors. By doing this, the DE2020 prepares the capacitors for the next peak.

This system can also compensate for fluctuations in the mains by using a pre-filter in combination with the capacitor bank. Or, in the event of a sudden power failure, the DE2020 can supply the Gen3 system with enough energy to reach the safe return to home position.

The Gen3 control cabinet, half the size of prior designs, houses Moog’s DM2020 multi-axis servo drive, which controls the motion system’s actuators. Moog engineers achieved the compact design using a common DC bus managed by the DE2020 system. The DM2020 ensures high speeds and faster cycle times through a control board and software that handles various motor and actuator types. The DM2020 synchronizes the axes through an EtherCAT connection between the modules; with a standard DC bus configuration, the DM2020 enables an energy exchange between the axes, reducing energy consumption. 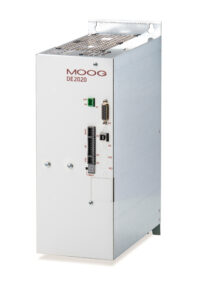 The DE2020 system meets peak loads by drawing power from the Gen3 motion base’s capacitor banks while using energy gains from braking and mechanical inertia to recharge the capacitors.

The Gen3 motion system also uses Moog’s fastest, most-recent planetary roller screws, which carry high loads while precisely accelerating or braking. Depending on the type of payload the Gen3 system underpins, its actuators can move approximately 15 tons from 2.2 meters (7.22-ft) to 4 meters (13-ft) and tilt the payload +/- 27° at a rate of 70 cm (28-in.) per second.

Moog engineers expect the Gen3 system to reduce unplanned maintenance by approximately 22% and provide users with more than 99.5% uptime.

“In redesigning the Gen3 system, we evaluated every component, especially the actuators, to ensure that the motion system contains fewer parts and customers can easily swap out or repair worn components,” added Herget. “Customers can replace the dampening elements during operation without removing or recalibrating the actuator. The power connection and encoder assemblies are replaceable too.”
Moog engineers see the DE2020 and DM2020 technology improving other applications for industrial automation, test benches, handling, robotics, or replacing hydraulic and pneumatic systems at an industrial facility.

Filed Under: ALL INDUSTRY NEWS • PROFILES • COMMENTARIES
Tagged With: Moog