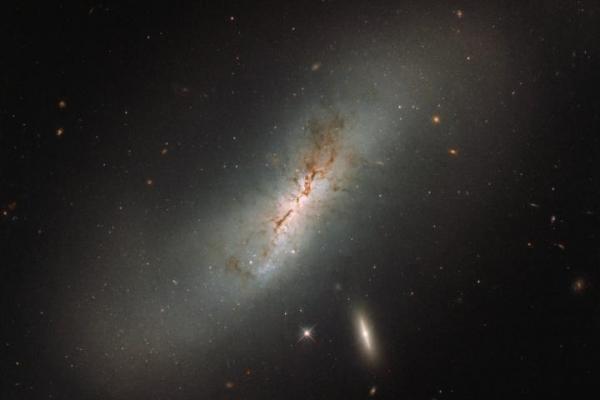 The larger galaxy, NGC 4424, is cataloged in the New General Catalog of Nebulae and Clusters of Stars, or NGC, which was compiled in 1888.

The NGC is one of the largest astronomical catalogs containing 7,840 entries and is why it is often featured in the Hubble Pictures of the Week. Stars in the NGC are typically larger, brighter and more visible in the night sky and stand out among stargazers.

The smaller, flatter galaxy identified just below NGC 4424 is LEDA 213994 and is part of the Lyon-Meudon Extragalactic Database, or LEDA, which is more modern than the NGC and contains millions of objects.

Many astronomical objects are names based on mythology such as Leda which was a princess in ancient Greek mythology.