SpaceX has racked up another rocket launch, its 16th this year.

The unmanned Falcon rocket blasted off Monday afternoon from Florida’s Kennedy Space Center, hoisting a communications satellite for the South Korean company KT SAT. This newest Koreasat will replace a failed satellite launched in 2006, and serve both Asia and the Middle East.

Once separated, the 15-story first-stage booster flew to a floating platform in the Atlantic and landed upright. The TV link of the touchdown was lost. But SpaceX confirmed success despite the choppy seas and some flames shooting from the landed booster. The fire went out.

“A little toasty, but stage one is certainly still intact,” said the launch commentator from company headquarters in Hawthorne, California.

SpaceX expects to reuse the booster to save time and money. Other rocket makers ditch the boosters at sea following orbital missions.

The company has launched almost every month this year—a personal record—flying Falcons from both U.S. coasts. 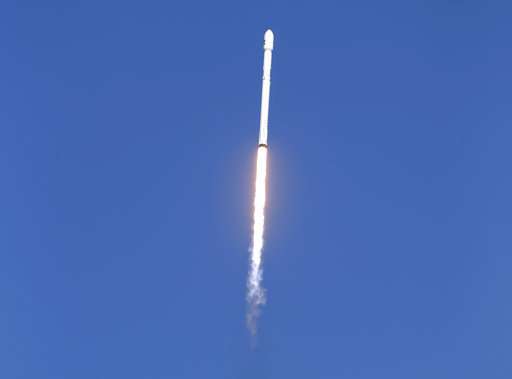